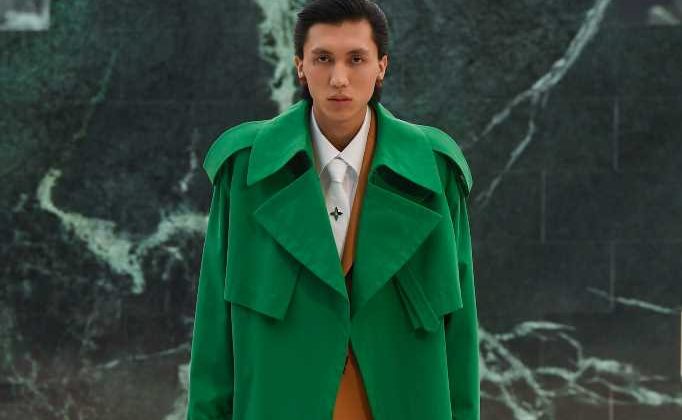 Who gets to claim ownership of a piece of clothing? It’s a question that Virgil Abloh was left pondering after his last collection for Louis Vuitton, following accusations by Belgian designer Walter Van Beirendonck that he ripped off some of his designs — claims that Abloh strongly denied.

It got Abloh thinking about cultural appropriation, and his perception of design as a Black teenager in the U.S. “I grew up feeling that design wasn’t for me, because I didn’t see anyone like me in design,” he said.

Instead, Abloh’s vernacular was “normcore: things that are readily available, the un-designed. The clothes that were at my discount store, those weren’t designed, and the clothes on the luxury street, those are designed. So that’s my fashion education.”

Wardrobe staples — a business suit, a denim jacket, a duster coat or a pair of jeans — formed the basis of his fall lineup for Vuitton. But even archetypes can take on a political slant when viewed through the prism of race. In a color-blind world, what does a student look like, or a salesman, a gallery owner, an architect?

The question underpinned his immersive presentation, which blended elements of slam poetry, choreography, concert, art installation — and even ice skating. Developed with performer Josh Johnson, the concept was inspired by “Stranger in the Village,” a 1953 essay by novelist James Baldwin. 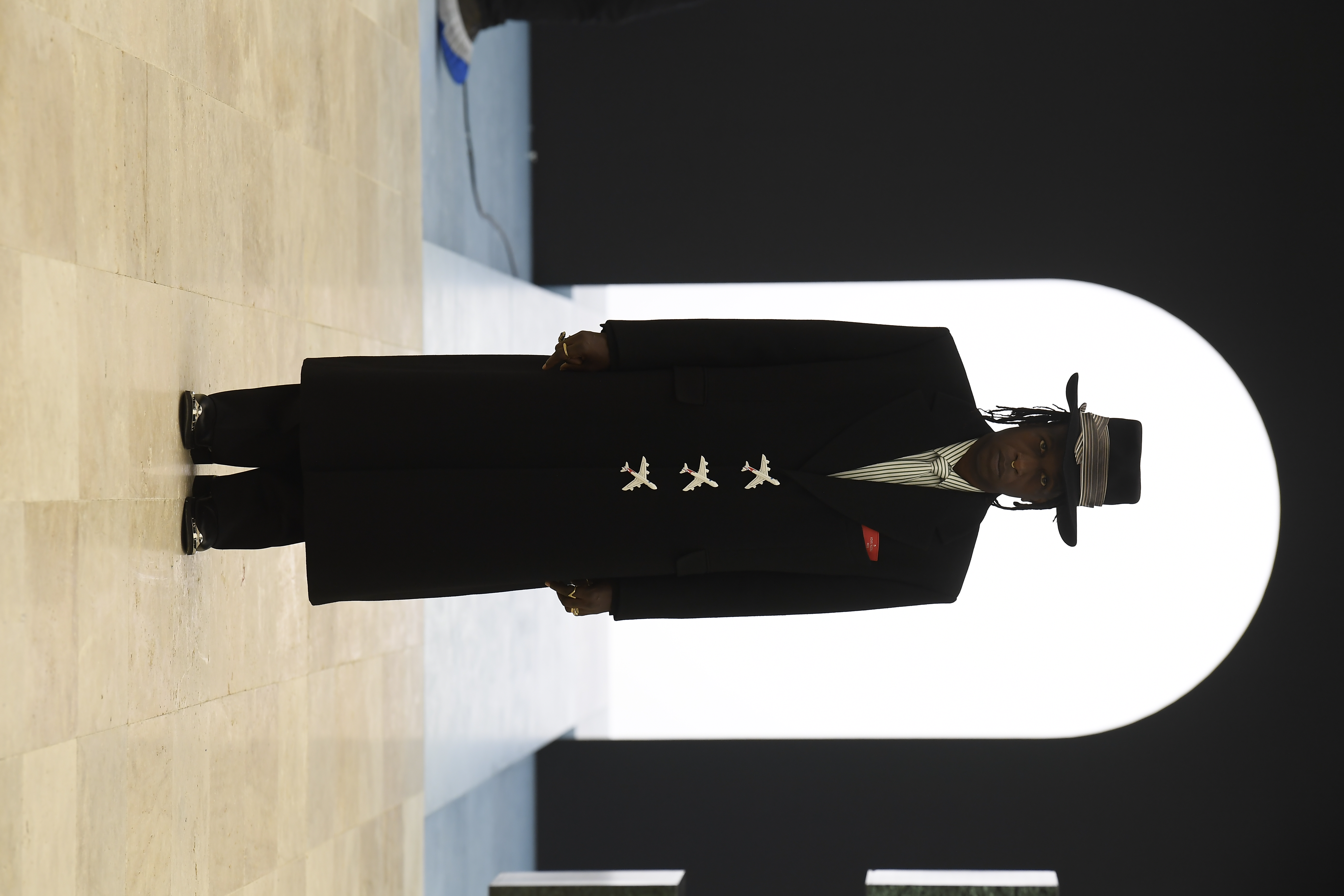 Originally designed to be performed live, the show was filmed without guests due to ongoing restrictions designed to curb the spread of COVID-19.

Standing in as the Baldwin character was “Slam” star Saul Williams, who delivered a magnetic performance. The opening scene showed him in a black overcoat wandering through a snowy mountain landscape, before transferring to a modernist marble set inside the Tennis Club de Paris.

Men in sleek suits strode past as a man lay unconscious on the floor, dressed much like them. A voice on the soundtrack intoned: “As Black people, and as trans people, and as marginalized people, the world is here for our taking, for it takes so much from us.” The show closed with a blistering performance by rapper Mos Def.

Outfits read like amplified versions of familiar silhouettes: a gray suit was transformed with a trompe-l’oeil marble print, while coats were dramatically elongated to trail on the floor. “I wanted to make clothes that were normcore, but sort of amplify them, so that they became artisanal, or runway, or editorial,” Abloh said.

The designer has spoken often about his “3 percent” rule: modifying an existing design by just 3 percent to turn it into something new. It’s an approach that has exposed him to charges of plagiarism, which he believes have an imperialist undertone, since white designers routinely borrow from other cultures.

Turning the tables on his critics, Abloh decided to point out Black design motifs that may go unrecognized in Western culture. Checked fabrics, used on outerwear or kilt-like pleated skirts, created a bridge between Scottish tartans and the kente cloth worn by his Ghanaian father for special occasions. 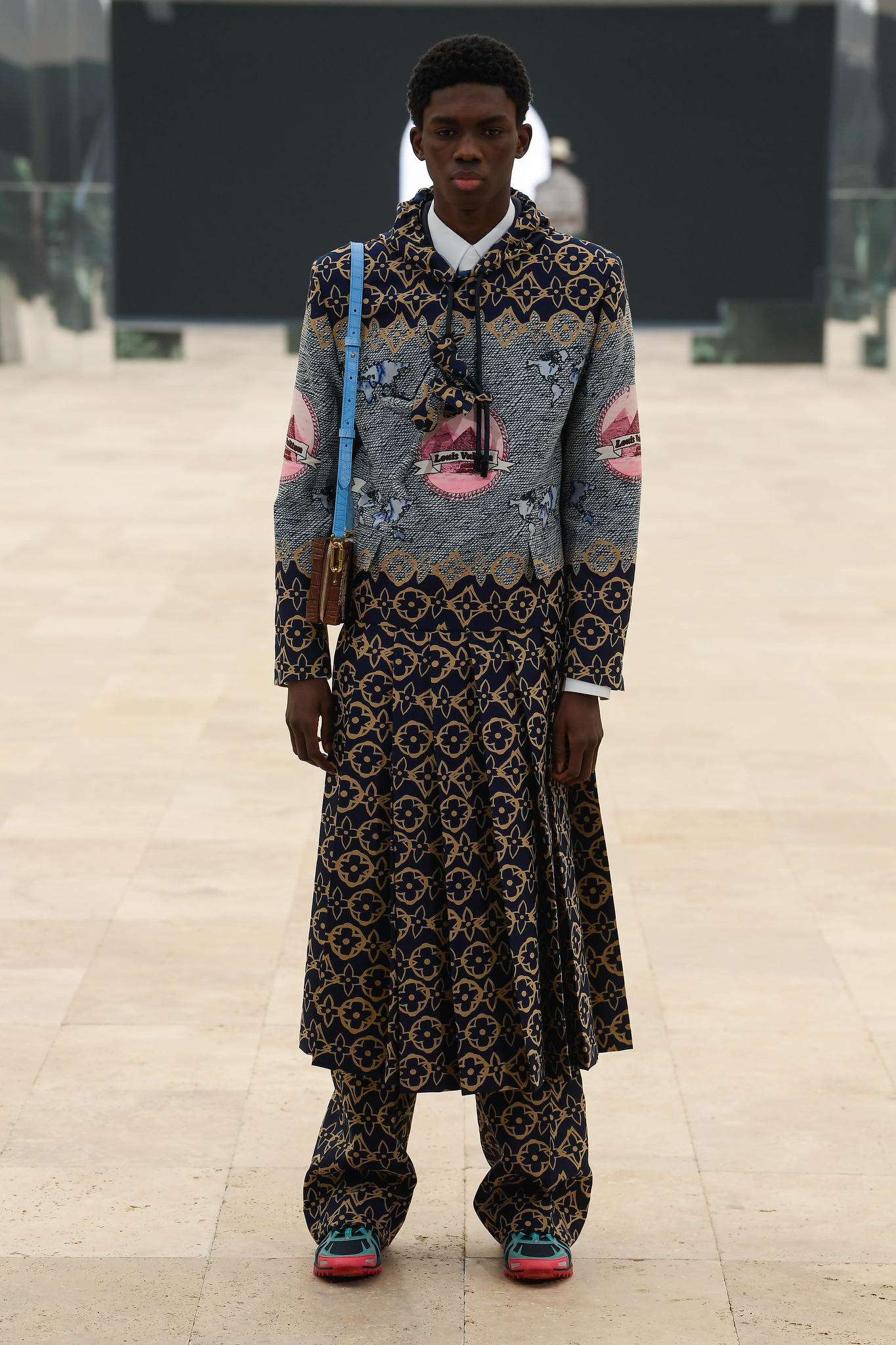 Patterned fabrics, incorporating Vuitton’s signature flower monogram motif alongside pyramids and world maps, were based on the vibrant wax fabrics favored by his mother.

“Being one of the few designers of color that shows on the Parisian schedule, in a way, I’m a figurehead for a movement for diversity,” Abloh said. “I frankly don’t want those things to just be a moment.”

To emphasize his point, the designer, who has made words in quotation marks a signature of his Off-White label, tapped conceptual artist Lawrence Weiner to create cryptic aphorisms such as “Somewhere somehow,” which featured on bag straps and scarves.

Punctuating his grab bag of formal and casual silhouettes were trompe-l’oeil constructions, such as a top made of reproductions of Paris monuments like Notre-Dame cathedral, and a series of outfits in a green screen shade that read like a wry comment on our digital lockdown lives — and was guaranteed to pop on Instagram. 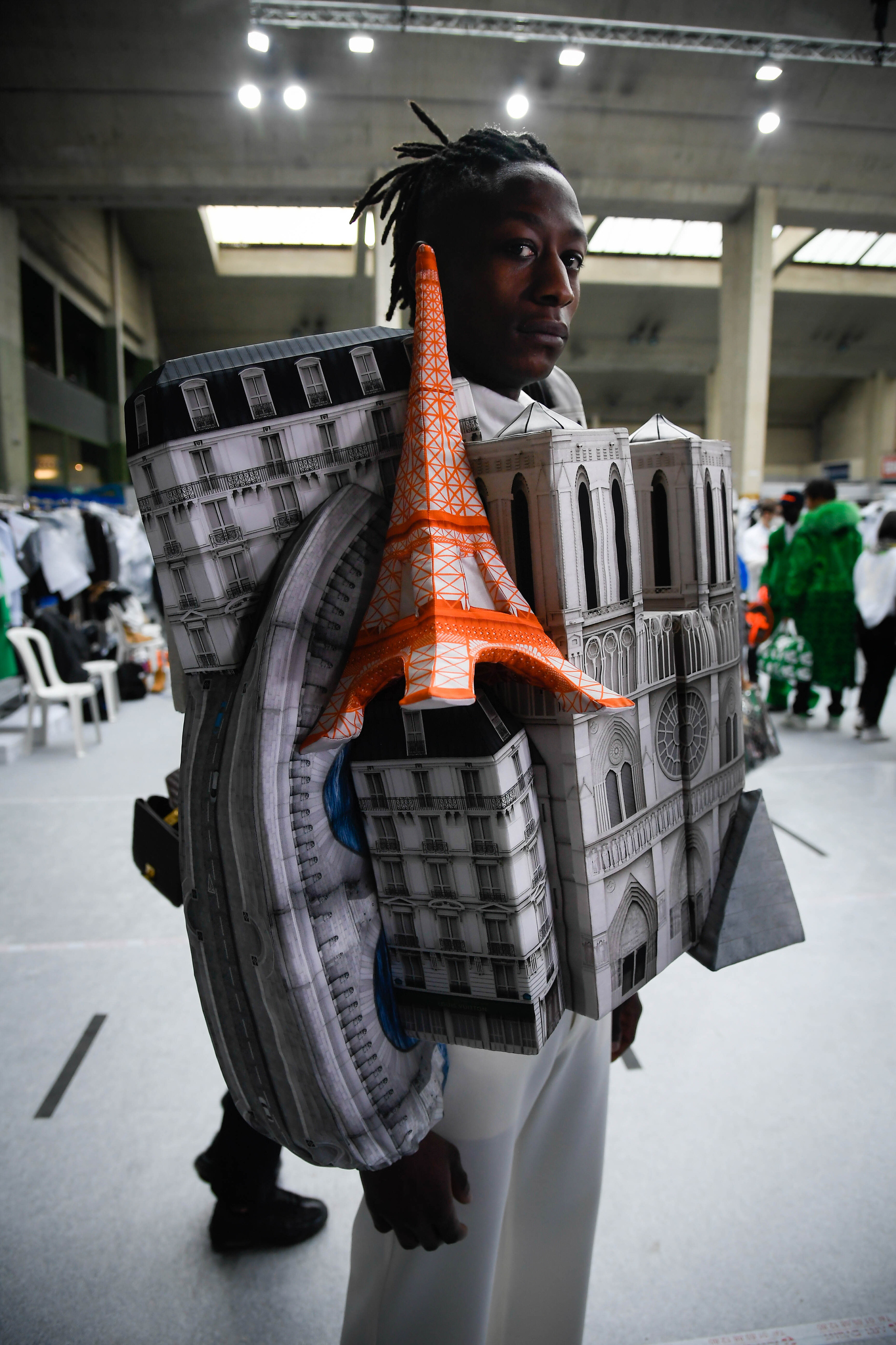 With collection notes so dense, they practically required a degree in cultural studies, the show encapsulated the challenges facing designers today: how to cater to changing consumer tastes, address diversity, recycle,and somehow still cut through the noise?

“There is an unprecedented amount of time to think,” Abloh mused. “Crafting a show in 2021 is way different than 2020 and 2019, for sure. It takes a lot of dimensional thinking for me to do something with weight and gravity, but also in terms of factories closing, or an ambition to stay on schedule, and make something artful.”

In that sense, the fall 2021 show marked his most ambitious project to date, and cemented the role of fashion brands as producers of cultural content. While it would be hard for Abloh to claim sole credit for the effort, given the number of creative collaborators involved, that was precisely the point.