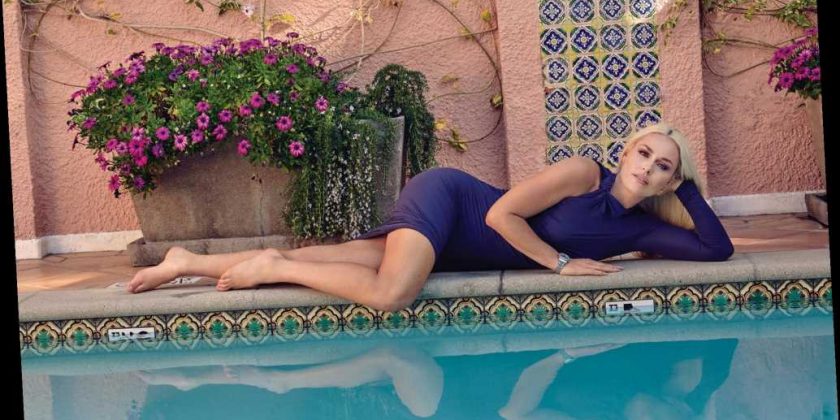 When Olympic gold medalist Lindsey Vonn, decided to officially hang up her skis in 2019 — after tearing the lateral collateral ligament in her left knee — she struggled with emptiness and depression, even comparing it to a death in the family.

In a 2020 interview with sports journalist Graham Bensinger, Vonn insisted that she was swearing off the slopes completely, because her body couldn’t keep up with her mental drive to win. “If you’re a Formula 1 driver, is it going to be really that fun to drive a Prius?” she told him in 2020. “It’s not the same.”

But since that interview, the 5-foot-10 Olympian has had a dramatic shift in perspective.

“[Retirement] was really hard for me to get over, but I am finally in a really good place, which I am thankful for,” she tells Alexa with a smile. “The more time away from the sport has been better for me.”

It’s no surprise the transition took a minute. Vonn’s life had revolved around the piste from the tender age of 2, when her father, Alan Kildow, strapped a pair of skis on her tiny feet. By age 7, she was racing competitively; in the late ’90s, her family moved from Minnesota to Vail, Colo., so she could seriously pursue the sport. A decade later, at just 17, Vonn made her Olympic debut at the 2002 Salt Lake City games. By the time she retired at 34, Vonn was the most decorated female skier in US history, with 82 World Cup victories.

Her life off skis, meanwhile, was no less intense. Vonn filed for divorce from her former coach and husband Thomas Vonn in 2011, a relationship that reportedly led to an estrangement with her father. She later drew headlines for her three-year romance with golf superstar Tiger Woods and recent engagement to NHL player P.K. Subban, which ended in December. (The pair recently listed their Beverly Hills mansion for $7.1 million, while Vonn scooped up a $3.4 million bachelorette pad in the neighborhood earlier this month.)

After that whirlwind, and without the rigors of competition framing her existence, the former champion realized she needed to create other avenues to victory.

“There was something missing — skiing, which had always been there — I used racing as a crutch.”

Vonn is now throwing herself into a multitude of projects: founding Après Productions (with her childhood friend Claire Brown), designing a ski collection for Head, and penning a memoir, “Rise: My Story,” which will be published by HarperCollins. She traveled to the Bahamas last fall with friends to celebrate her birthday — something she hasn’t done since she was a young child.

“There was always a reason I couldn’t do things, but now I am only limited by what I want to do,” she reflects.

And once she eased up, she even rediscovered her love of the sport that made her famous. “This year, I’ve skied quite a bit, and am finding my passion for it again. I’m realizing how nice powder is. It’s a lot easier on my knees than racing and moguls.”

If the last two years have allowed her to recover mentally, they’ve also been a period of physical reinvention. Throughout her career, Vonn’s body has sustained (and overcome) enough injuries to fill the pages of “War and Peace.”

There was her back injury in December 2017, and a fractured humerus bone in November 2016 that required surgery. The previous year, she fractured her ankle during a crash in New Zealand; three months later, she had to be taken off the course in a sled for a hairline fracture of her left knee. In the Vancouver Olympics, she won gold in the downhill with a bruised right shin. During the 2006 games, Vonn crashed during a downhill training run and was airlifted by helicopter, only to return two days later and finish eighth.

While most of her injuries were occupational hazards, one was downright unlucky: She sliced open her right thumb, cutting a tendon on a broken champagne bottle while celebrating her victory at the 2009 World Championship.

Vonn now works out three days a week with celebrity trainer Gunnar Peterson, sessions she frequently documents on Instagram. “I’m just working out to keep my knee strong and feel good.” But the mix of cardio and strength training have had a surprising result.

“I’m a lot leaner,” she says. “I used to do things that were so sport specific, so I had to be bigger. But everyone is like ‘Oh my God, you’re in the best shape of your life.’ It’s like — yes and no. I’m not training for my sport anymore, I am training to be lean and fit.”

But Vonn, who has always sported a powerful, sinewy frame, never needed permission to take risks with fashion.

“A lot of people have said, ‘You shouldn’t wear things like that. It doesn’t look good on your body type.’ Or ‘You’re too muscular for that.’ I’m not going to say who, but I’ve had a lot of people say not such nice things to me.”

Along with Serena Williams and Maria Sharapova, Vonn was one of the first female athletes to cross over into the fashion world, attending the Met Gala with then-beau Woods in 2013 and landing in Vogue a few months later. Posing for the fashion bible in a flowing Narciso Rodriguez dress that showed off her sculpted gams, she made for a refreshing departure from the typical stick-thin models and actresses.

“Vogue is the standard in fashion, and it wasn’t really open to athletes — it was strictly models — so I felt like it was a big step for me to be recognized in that way,” she says.

She also remains chummy with designer Cynthia Rowley, who served as Vonn’s industry Sherpa, bringing her to the Council of Fashion Designers of America (CFDA) Awards in 2013. And she recently charmed designer Thom Browne. The purveyor of skinny suits cast her as the star of his fall 2021 campaign, which showcased Vonn traipsing through a snowy wonderland in a fairytale dream sequence, wearing a gold couture dress over a tuxedo jacket.

“We filmed for two days in Utah, and it was amazing,” she says. “I was really honored he wanted me to be part of that.”

Vonn — who always competed with a full face of makeup — is swerving into the beauty lane as well, with a cosmetics line (whose launch was pushed to 2022 due to COVID-19). “It’s about products that do more than one thing,” Vonn says.

She could easily be talking about herself.

The Olympian has recently embraced her position as elder sports stateswoman, serving as a sounding board for current members of the US Alpine Ski Team and opening up her home as a de facto rehab center for athletes recovering from surgeries. Vonn is particularly close with young skiers Alice McKennis and Breezy Johnson.

“They consistently reach out to me,” Vonn says. “It makes you feel like you did something right. It’s very fulfilling.”

It’s a role her childhood idol and mentor, gold medalist Picabo Street, famously filled for her.

“It’s come full circle — [Street] inspired me to try and inspire others. She is the reason I created my foundation,” Vonn says, referring to her eponymous girls’ empowerment and scholarship organization.

She’s currently making a documentary about her mentor, the first project from Après Productions. “We have a great relationship, and I am able to showcase everything she meant to me. We did some interviews already, and there was crying. It was very emotional.”

In the end, Vonn’s second act is shaping up to be just as breakneck as her first — but she’s never been one to back away from a challenge.

“Honestly, right now, these have been some of the scariest times, because I don’t know what is ahead,” she says. “As an athlete, you try to control as many variables as you can. And I can’t control any variables right now. I am just trying to stay in the moment and spend time with people I care about.”

You haven’t truly arrived in Hollywood until you’ve stayed (or at least played) at one of the Beverly Hills Hotel’s 23 bungalows, some of which date back to 1915. Now, thanks to visionary interior designer Alexandra Champalimaud, they’ve been given modern makeovers to match the 210-room hotel’s timeless design. “This classically rich heritage was the perfect foundation upon which I layered a contemporary and current point of view,” she says. Also getting the Tinseltown treatment? Eleven glamorous new pool cabanas and the hotel’s seductive, secretive new spa. With fresh-pressed juices, an upgraded fitness center and wellness kits for overnight guests, it’s the ideal destination for Hollywood royalty — or anyone who imagines themselves the star of their own feature film. Rooms from $595; bungalows from $2,300.