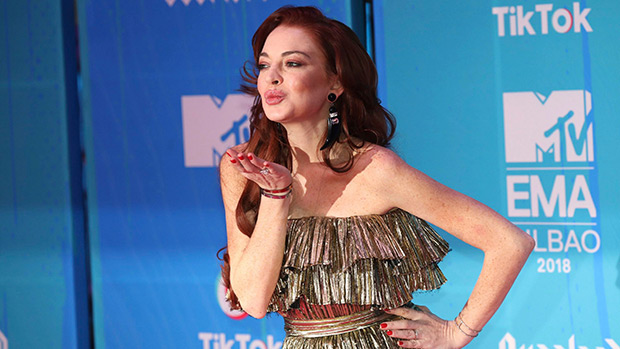 Slayy! Linday Lohan showed up to the 2018 MTV EMAs looking like royalty in a metallic dress we can’t take our eyes off.

Linday Lohan, 32, is always a stunner, and her appearance at the 2018 MTV Europe Music Awards was no different. The Freaky Friday actress wore a metallic gold gown as she stepped onto the red carpet, which featured flowing ruffles down the front. The strapless look was paired with black and silver statement earrings, and the glamour didn’t stop there. Lindsay and opted to wear her hair classic Marilyn Monroe style, and she looked gorgeous as the curls flawlessly fells at her shoulders!

Lindsay attended the show, held in Spain, to present an award, as will Anitta, Ashlee Simpson, Debby Ryan, and Evan Ross. The 2018 EMAs are shaping up to be quite the star-studded event. There are TONS of A-lister celebrities in attendance, and the show was hosted by none other than Hailee Steinfeld. In addition to a performance form the host, stars such as Nicki Minaj, Halsey, Panic! at the Disco, Alessia Cara, Marshmello, Bastille, Anne-Marie, and Jack & Jack were included in the 2018 lineup!

Linday’s outfit might have people talking for a bit, but once that dies down, we’ll all be focused on the real news: her appearance in Life Size 2! While there was some confusion initially as to Linday’s involvement in the film, Tyra Banks later revealed she would indeed be making an appearance. “You’re going to have to see Life Size, to see what Lindsay does,” Tyra Banks teased during an interview with E! News at the America’s Got Talent finale. “It’s an interesting creative way that my producers have Lindsay involved.”

Linday’s 2018 EMAs look is good as gold! We’re so happy to finally see Linds make an official public appearance, and look so stunning doing it!