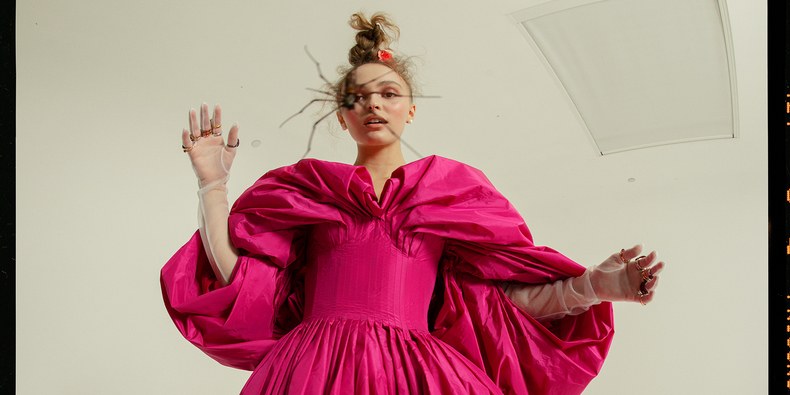 "I'm going to say it right now—I’ve never been good at interviews,” Lily-Rose Depp announces a few minutes after we meet. “I’m shy in these situations, and I just get really nervous and stuff.”

We’re at a café near her mother’s apartment in Paris, and Depp is sipping an espresso while gamely facing a series of questions from a stranger with a tape recorder. The advance word on the 20-year-old actress is that, shyness aside, she’s unfailingly well-mannered and likable—a reputation that she substantiates even before we meet when she calls my cell to ask if we can postpone our interview by a whopping half hour. (“I’m really sorry!”) Surely when your father is Johnny Depp and your mother is Vanessa Paradis, you’re aware that being 30 minutes late for an interview is not the end of the world. But she thanks me for being flexible and apologizes again.

As for the nervousness thing, any interviewer meeting Depp might wonder why she’s chosen to work in a field that sets her up for a lifetime of public scrutiny. As she sits on a banquette wearing scuffed white Reeboks and a plain cotton dress that only accentuates the pouty-lipped splendor of her face, Depp maintains a poised, friendly bearing and a direct gaze. But the handful of interviews she’s given so far have revealed basically nothing, aside from her belief in the importance of maintaining her privacy. When I begin with an innocuous question about where in L.A. she celebrated her recent birthday, her evasive answer (“At, like, my friend’s place or something”) makes her limits clear. After she relaxes a bit, Depp acknowledges that fame in general is something that gives her “a ton of anxiety.” So what led her to pick a career that invites even more of it? Since getting her first taste of acting a few years ago, she replies, she’s had no choice but to make it her life’s work. The only place where she’s truly free of self-consciousness is, in fact, a movie set, where she can be fully immersed in a character. “When I’m acting, I’m not thinking about myself,” she says. “Because I’m not there. You know?”

Whatever her strategy, it seems to be working. After starting out with a couple of minor roles in smallish films, she’s now showing an impressive capacity for both depth and range. In Louis Garrel’s love-triangle drama A Faithful Man, released in the U.S. this summer, she takes what could have been a crazed-stalker character and delivers a complex ­portrait of a young woman discovering her emotional and sexual power. Next year, in Nicholas Jarecki’s gritty drug-cartel thriller Dreamland, she plays a ravaged addict whose brother (Armie Hammer) traffics in ­opioids. And in Netflix’s big-ticket historical drama The King, due out later this year, she stars alongside Timothée Chalamet and Robert Pattinson, playing the strong-willed princess Catherine de Valois.

Although Depp went to school in L.A. and fills her conversation with breezy California slang (her favorite activity when not working: “­rolling super-deep with my friends”), she’s still something of a mystery to American audiences, a silent sphinx known mainly as a model. For that she credits her paparazzi-magnet parents, who split in 2012 but remained determined “to keep my brother and me as much out of the spotlight as they could,” Depp says. “Now, I’m choosing to do this job, and I know what comes with it. But when you’re younger, you don’t get to choose.” Even when she discusses her fashion gigs—she launched her career with a Chanel eyewear campaign at age 16—Depp can still sound like a starstruck newcomer. Recalling her first day on the set of her shoot for the fragrance N°5 L’Eau campaign, she says, “That whole day is like a blur of dreaminess.”

Depp tells me that she’s a typical Gemini, meaning that she often feels like two different people in a single body. One side of her is the enthusiastic and hardworking American, the girl who packs her crew of friends into her car for lunchtime runs to Pinches Tacos or Poquito Más. But when she’s here in France, where she spent summers and holidays while growing up, she can seem like a 21st-century version of her iconically French mother, the singer-actress-model who had her first hit song, “Joe Le Taxi,” at age 14 and later starred in multiple Chanel campaigns of her own. (If you haven’t seen Jean-Paul Goude’s 1991 commercial for the fragrance Coco, with a black-feathered Paradis whistling on a trapeze inside a birdcage, Google it right now.) Whenever Depp lapses into French, the entire structure of her face undergoes an instantaneous shift. “There’s a whole aspect to the French language that’s just facial expressions and sounds,” she says, launching into a droll series of exaggerated grimaces: the world-weary eye roll, the flirty pout, the impatient exhale. Personality-wise, she says, her Gallic side embodies “a certain nonchalance about things. Not that I’m nonchalant about everything, but there’s a lightness and a joie de vivre that French people have that I try to carry with me. I think the French do pleasure very well, and that’s what I feel the most connected to.”

As Depp inches toward adulthood, another dichotomy is evident in the push and pull between her inner ingenue and her inner badass. She says the latter side has been emerging more frequently as she takes cues from the fierce and willful characters she’s been portraying. In one pivotal scene in A Faithful Man, teenage Ève turns up at the Paris office of her crush, played by Garrel, to proclaim in front of his coworkers that she loves him—and that she thinks about him while she masturbates. “She’s so sure of herself and just goes for what she wants,” Depp says. While playing her, “it’s kind of impossible not to have that affect you personally.” Same with The King’s Catherine de Valois, who was the wife of Henry V of England and the daughter of Charles VI of France, and whom Depp sees as a feminist before her time. Due to Charles’s severe mental illness, Catherine’s mother “kind of ruled the kingdom behind closed doors,” Depp says, and raised her daughter “to not let her life be driven by the men around her.”

As her career progresses, Depp knows that comparisons to both of her parents are inescapable, and it’s clear that she’s given plenty of thought to the cons as well as the pros that come with the privilege of saying “my dad” when you mean Johnny Depp. “I’m not going to say that it doesn’t make it easier to get your name out there,” she says. “Obviously it does. But honestly, to me there’s also something even a little bit harder about it, because the expectations are so insanely high. My parents are both incredible artists in their own right. So all I can do is try and be my own person and do my own work.”

For Depp, part of the thrill of performing is the emotional deep dive it requires; she says she respects other actors who can turn their craft on and off like a light switch, but in her case that doesn’t work. “For me there’s no other way to do it than the vulnerable approach, completely laying your soul bare,” Depp says. She describes that mental state as a sort of therapeutic refuge in which superficial, everyday concerns are forgotten. Your skin and hair look hideous? Get over it—you’re in character. “I mean, you can’t be worried about looking pretty when you’re acting,” she says. Granted, “if you’ve got a camera in your face, you’re going to be thinking about it at first. But the more I learned about how important it is to know your character so well, the less I thought about myself as part of the equation.”

Before Depp heads back to her mother’s place, sending me off with a very un-Parisian hug, she mentions that she usually manages not to read magazine stories about herself. I feign relief, joking that I now have license to write all kinds of outrageous and untruthful things, and she’ll never even know. She smiles and adopts the scolding tsk-tsk of a French schoolmarm, waving her finger menacingly.“Oh, I will read this one,” she says.