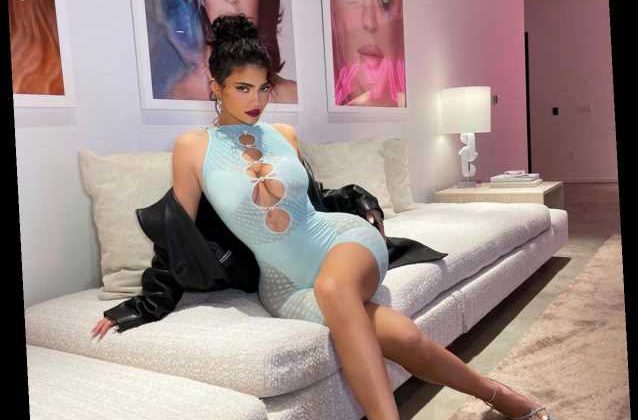 Kylie Jenner is her own protagonist.

The beauty mogul posted a series of photos on Instagram on Friday from her Kylie Cosmetics office sporting a sheer baby blue unitard with five circular cutouts across her chest.

Kylie, 23, completed the look with a black leather duster and a dazzling pair of silver heels.

In the first two photos, Kylie poses on a cream-colored couch with a set of three abstract makeup headshots hanging on the wall behind her.

In one of the photos, a neon pink "Kylie" sign can be seen in the reflection.

In a third photo, the reality star kneels in front of a set of white laminate doors covered with her company logo: a pair of lips with white paint dripping from them. Kylie, who welcomed her first child Stormi Webster in 2018, co-parents the 3-year-old with rapper Travis Scott.

Last month, while she did her sister Kourtney Kardashian's makeup for a new YouTube video, the two exchanged ideas about their parenting styles.

While Kardashian was in the makeup chair, Kylie took the opportunity to ask her older sister, "What is one piece of parenting advice that you would give me as a newer mom?"

"Letting [Stormi] be seen and heard and understood. Whatever she's feeling, validate those feelings," the Poosh founder, 41, said. "Letting them really feel like they have the freedom to be themselves."

Kardashian isn't the only one of Kylie's family members that's gotten a makeover recently — earlier in February, Caitlyn Jenner took a seat in Kylie's makeup chair.

RELATED: Kylie Jenner Does Caitlyn Jenner's Makeup for the First Time: 'Highlight of My Life'

"We've been talking about this for forever," the Kylie Cosmetics mogul said as she prepared for the makeup session. "We saved this special moment for you guys because this is going to be the first time that I ever do my dad's makeup."

"Did you ever think that this day would come?" she asked Caitlyn.

"No, did you ever think?" the star replied. "I mean, I was 65 years old before I finally came through this. It's like I had to raise everybody else and I had such a life and finally, it was my time to be me and live my life."

"I didn't think I could do it," she continued, referencing coming out as transgender in 2015. "And then I did it and you guys have been my best friend. My kids have been absolutely wonderful in all of this."