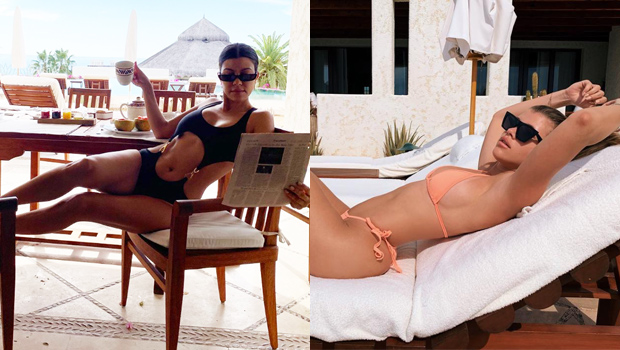 No wonder Scott Disick’s loving his Mexican vacation with both his ex and his current girlfriend — both Kourtney Kardashian and Sofia Richie look stunning in their bikinis! But who wore the look better?

Shortly after it was revealed that Scott Disick was vacationing with both his ex, Kourtney Kardashian, and current girlfriend, Sofia Richie, in Cabo San Lucas, Mexico, both women took to Instagram to show off their hot bodies in bikinis! Are they competing with each other? Considering the fact that they’re both vacationing with each other, we’d say they’re probably pretty friendly with each other, but the timing of their bikini pics does seem pretty suspicious. Sofia posted her bikini pic late last night, on Dec. 23, while Kourtney followed up with her own sexy photo this morning, on Dec. 24. Both of them look great, but who wore the look better?

For Sofia’s post, she shared an image of herself lounging sideways on a daybed, while wearing a peach colored bikini. She put her ample cleavage on full display as she stared into the sun and looked like she didn’t have a care in the world. And her body looked so good that you could see her abs from a mile away! Sofia could pretty much wear any bikini and look stunning, but there’s something about this peach-colored two-piece that we can’t stop staring at! Sofia looks amazing.

But so does Kourtney! For her photo, she struck a similar pose as Sofia by lounging sideways on two chairs. But instead of a colorful bikini, Kourtney went for a classic black two-piece! And it’s a gorgeous bikini — we especially love the gold buckles that connect the top and bottom pieces. It’s a unique addition to the bathing suit and we wish we had one of our own!

Of course, only one woman can rock this look better — so who was it? Kourtney or Sofia? We’ll let you decide!