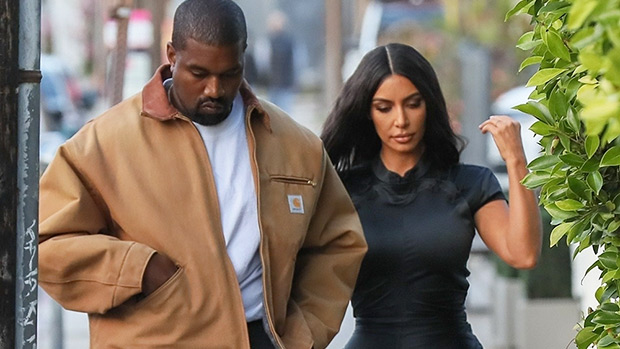 Kim Kardashian showed off her hourglass figure while getting dinner with husband Kanye West in Santa Monica.

Kim Kardashian, 38, and husband Kanye West, 41, looked chic and gorgeous while out together on a date night on May 23. The married couple enjoyed an evening at Giorgio Baldi, a luxurious Italian restaurant, while looking as fashionable as ever. On the outing, Kim wore a curve-hugging black mini dress that accentuated her tiny wiast and black gladiator high heels. She had in long black extensions and wore her hair in loose waves.

Kanye kept his outfit neutral as well. He wore a white t-shirt and black pants and a brown jacket on top. Kanye completed his look with black sneakers. The couple’s date night came two weeks after their fourth child, Psalm, was born. Kim and Kanye used a surrogate for Psalm’s birth, as they did for their third child, Chicago, 1.

The world definitely had a strong reaction to the name of their latest child. But for Kim and Kanye, “Psalm” works for them. “Faith is everything to Kanye, he has always had a very strong connection to the gospel and to Jesus, so although this name choice has come as a shock to a lot of people, it actually makes perfect sense,” a source close to the Kardashians EXCLUSIVELY revealed to HollywoodLife. “Kim loves the name and what it represents to them both. This is a blessed child, literally a gift from God and they are so overjoyed. There will be a big celebration and a christening at Sunday service when the times is right.”

Another source revealed that Kim and Kanye are already thinking about their next baby! “Kim is doing amazing with the new baby. Motherhood just comes so naturally to her and she has even told friends she would like to go for a fifth child,” the insider EXCLUSIVELY revealed to HL.

“If she does, it would be sooner rather than later, but right now, she’s just enjoying number 4,” our source continued. “Some of her closest friends have come over to the house since she’s busy nesting and just being a new mom. She’s so elated and this baby has brought her and Kanye even closer together. She’s barely left home since the baby came home officially. She stares at the baby constantly in awe.”

Now that a couple of weeks have gone by since Psalm’s birth, we’re glad to see Kim and Kanye out and about and enjoying themselves! We love seeing their fashion out on display, and hope that they’re loving being new parents yet again!