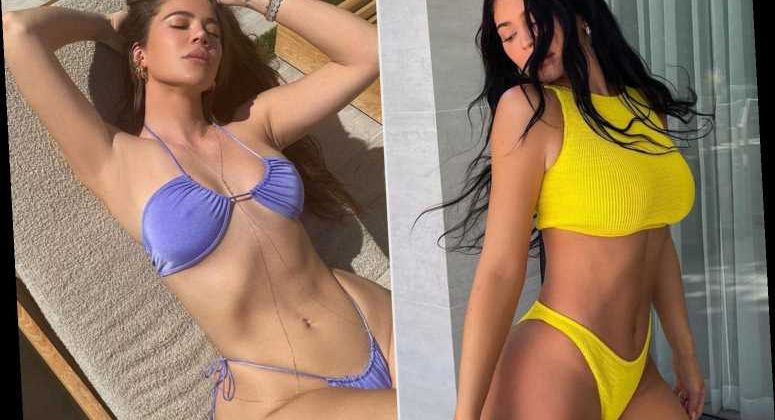 Khloé Kardashian and Kylie Jenner are showing off their bikini bodies!

The Keeping Up with the Kardashians stars both shared sizzling snaps of themselves in swimwear lounging by the pool ahead of their Easter weekend in Palm Springs, Calif., with their daughters Stormi Webster and True Thompson.

Khloé, 36, wore a purple string bikini in a series of photos she posted. The Good American founder laid down on a lounge chair and struck poses while basking in the sun.

"The Purple Eater 💜," she captioned the photos. RELATED: Kardashians Get Competitive with 'Genetically Gifted' Jenners During Volleyball Match on KUWTK

Kylie, 23, struck similar poses to her older sister in several snaps of herself in a yellow halter top bikini.

"it's the weekend 💛," she captioned one of her posts.

In another post, the Kylie Cosmetics founder zoomed in on her taut abs wearing the same bikini. RELATED: Khloé Kardashian Claps Back After Fan Asks If Kylie Jenner Can Be Friends Again with Jordyn Woods

Kylie and Khloé are both fans of working out and often post about it on their social media accounts.

In one episode of KUWTK, they put their athletic abilities to the test by going head-to-head in a competition.

"As siblings, we're always competitive, but Kendall has been talking a lot about how the Jenners are genetically gifted and this is something that makes my blood boil," Kim Kardashian said as the clip flashes back to a previous conversation between Kendall Jenner, Kim and Khloé.

"I did this blood test — they told me I'm super athletic and that I'm built for this s—," Kendall, 25, told her sisters, referring to taking after her dad Caitlyn Jenner, who was an Olympic gold medal-winning decathlete.

"We are not genetically gifted, but we have fought harder to be athletes, to work out, to have a routine," present day Khloé said in a confessional.

Keeping Up with the Kardashians airs Thursdays (8 p.m. ET) on E!