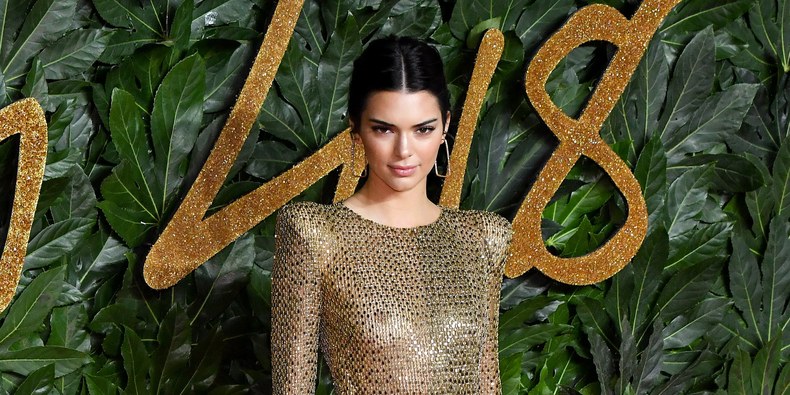 Kendall Jenner, who once told W "I'm weird, I love my tits being out," has for years now been an active proponent of the practice known as "freeing the nipple." A few months after a notable nipple moment at the Cannes Film Festival, Jenner had another on Monday night in London at the British Fashion Awards, where the title of "model of the year" went to Kaia Gerber, the 17-year-old who started off 2018 by topping not just Jenner, but also Cara Delevingne and both Hadids, in one of Instagram's most significant metrics.

For the occasion, Jenner slipped into a gold, long-sleeved, floor-length dress with an open back and a sizable slit by the (fittingly London-based) designer Julien Macdonald, famed creator of Paris Hilton's 21st birthday chainmail dress. Ordinarily, wearing the see-through garment would require quite a bit of adjustments and engineering, but rather than go through the trouble of procuring nipple pasties or a pair of underwear that matched her exact skin color—the usual protocol followed by those bold enough to wear a naked dress—Jenner simply wore it as is, forgoing a bra and wearing a thong as one she’d likely wear on any other day. Naturally, it shone right through on the red carpet, unexpectedly matching the dress's shoulder pads.

That no-frills approach may have simplified things for Jenner, but it did, however, present some complications for some of the rest of the evening's guests, who were apparently left in shock. Suffice to say that Jenner managed to stand out even in the presence of the evening's surprise guest, Meghan Markle, who spent much of the evening cradling her nascent baby bump, as well as Cindy Crawford and Victoria Beckham's accidentally twinning families. (Not to mention Kate Moss.)

That wasn’t Jenner’s only outfit of the night. After the awards—and apparently after changing out of her dress—Jenner headed to a local 24-hours McDonald’s, where she placed her order and then patiently waited for it, blending into her surroundings in her new ensemble of baggy jeans, stilettos, and a knee-length leather coat, all of which pared down the golden earrings that she'd kept on from earlier in the evening. In short, she finished off her night like a regular ole plebeian. (Save for the fact that she was accompanied by her bodyguard.)

Related: Kendall Jenner Is Going to Continue Going Braless on the Red Carpet, Thank You


Kendall sports slicked back hair and nude lip while attending the screening of 'Girls Of The Sun (Les Filles Du Soleil)' during the 71st annual Cannes Film Festival at Palais des Festivals on May 12, 2018 in Cannes, France. Photo courtesy of Getty Images.