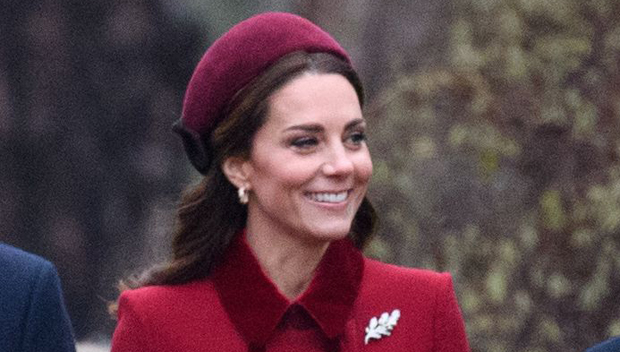 The Royal family always goes all-out for Christmas, and this year was no different! Kate Middleton stunned in red on the way to church.

Kate Middleton‘s fashion is always on-point, so of course she was going to be dressed to the nines for Christmas! The Duchess of Cambridge kept with the holiday theme, rocking a red jacket with a velvet collar and matching hat. She also matched her shoes to the look and donned a gold pin. This marked her first appearance with Meghan Markle and Prince Harry since the wild feud rumors about the royal couples. However, things seemed to be just fine, as Meghan, dressed in black, giggled and smiled with her sister-in-law.

Last year, Kate looks her most festive in an elegant $2,197.50 Miu Miu red and green plaid coat. At the time, she was carrying her third born, Prince Louis, and her growing bump swelled through the coat. The Duchess of Cambridge accessorized with a black clutch and warming fur hat. Of course, her traditional blow out was in full-effect and she was all smiles walking to the church for the holiday service. Last year’s Christmas at Sandringham was also Kate and Prince William‘s first public appearance with the, then-newly engaged Prince Harry and Meghan Markle. As the foursome walked to the Christmas Day service, Meghan and Kate were seen giggling and smiling with each other.

We wonder what the vibe will be this year, as rumors swirled of an ongoing feud between the two couples. Apparently, according to The Telegraph, a tiff between the two Duchesses caused Harry and Meghan to move out of Kensington Palace. Sources claim that Kate and Meghan got into an argument about bridesmaid dresses for the Suits actress’s wedding to Prince Harry, and the fight left Kate in tears. While Royal experts do agree that Meghan and Kate aren’t the best of friends, they don’t believe that the reason Harry and Meghan are moving is because of the feud, according to a new report from Fox News. “I think Meghan thought she had an ally in Kate. But everything happened so quickly. Kate was pregnant and unwell. And then she had a new baby. So she couldn’t give Meghan the attention she expected. And I think that’s when things started to sour,” expert Ingrid Seward told the outlet. Well they definitely appear to be feud-free on the way to Christmas services!