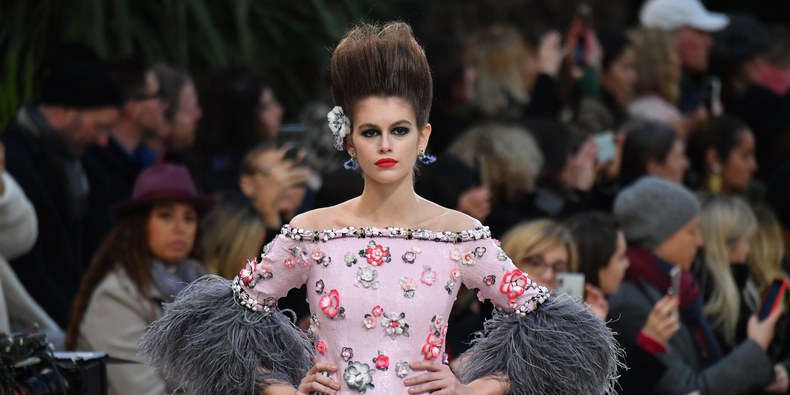 As is tradition, Chanel's Spring/Summer 2019 Couture show at Paris Fashion Week on Tuesday (January 22) closed with the presentation of an avant-garde bridal look. Before that bejeweled swimsuit-clad model took her turn down the runway, however, Kaia Gerber channeled a very different type of bride: With her dramatically teased hair, she bore more than a passing resemblance to the titular character in The Bride of Frankenstein, sans that signature wavy stripe down the side of her 'do.

Beyond the sky-high hair, though, the rest of Gerber's look was decidedly less sci-fi. She wore a pale pink, off-the-shoulder sequined gown dotted with fuchsia and gray floral appliqués and edged with black and white jewels. The gown's elbow-length sleeves ended in feather duster-esque dark gray fringe, and Gerber wore a matching gray feathered peplum around her hips. She completed the ensemble with blue fringed earrings; an oversized white flower pinned to her towering hairdo; pointy-toed, open-back black booties; thick black eyeliner ringing her eyes; and bright red-orange lipstick.

Not there to witness his muse's turn around the Grand Palais—which had been transformed into the grounds of a lavish Italian villa—was Karl Lagerfeld, who sent studio director Virginie Viard to welcome the crowd and accept the post-show applause in his stead. "For the traditional greeting at the end of the show, Mr. Lagerfeld, artistic director of Chanel, who was feeling tired, asked Virginie Viard, director of the creative studio of the house, to represent him and greet the guests alongside the bride," the brand said in a statement on Tuesday.

Gerber, 17, has been an official face of Chanel since February 2018, when she appeared in the Lagerfeld-shot Spring 2018 handbag campaign. That campaign came only a few months after Gerber made her runway debut, within days of her 16th birthday in September 2017. Since then, not only has Gerber been prominently featured in multiple Chanel shows (as well as those of many, many other designers), but she's also even teamed up with Lagerfeld's eponymous brand to create a limited-edition Karl Lagerfeld x Kaia capsule collection of clothing.

Related: Kaia Gerber on the Runway: See All the Rising Supermodel's Fashion Show Appearances So Far