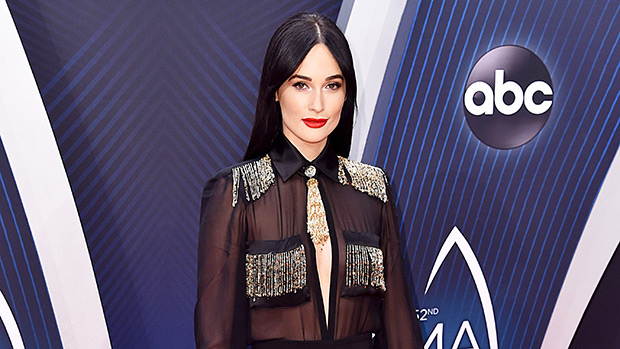 Slay, Kacey Musgraves, slay! The country singer dazzled on the CMA Awards red carpet in a fierce black top and pants. Kacey brought her fashion A-game to the CMA Awards, that’s for sure!

Kacey Musgraves, 30, turned heads at the Country Music Association Awards in a fab Versace ‘fit that was custom-made to perfection. Only the best for this star! The “High Horse” singer showed up to the Nov. 14 red carpet in a sleek suit, but underneath her black jacket was a sheer plunging top accented with gold chains. The fringe took center stage, falling from her shoulders, chest, neck and sleeves. And with her long black locks pulled back and a statement red lip, Kasey looked classic on the carpet. Such a stunner!

This year, Kacey is nominated for Female Vocalist of the Year and Album of the Year. She’s won three CMA Awards in the past for New Artist of the Year, Song of the Year, and International Achievement Award. The night before the CMAs, Kacey rocked a black floral mini dress and an amazing top knot at the BMI Awards.

Kacey has had an incredible year. She dropped her third studio album, Golden Hour, in March 2018. The album was one of the most critically-acclaimed country albums of the year, and she’s still keeping busy as 2018 comes to an end. Kacey’s currently on her Oh, What A World Tour, and she’ll be a guest judge on RuPaul’s Drag Race All Stars season 4. The more Kacey, the merrier!