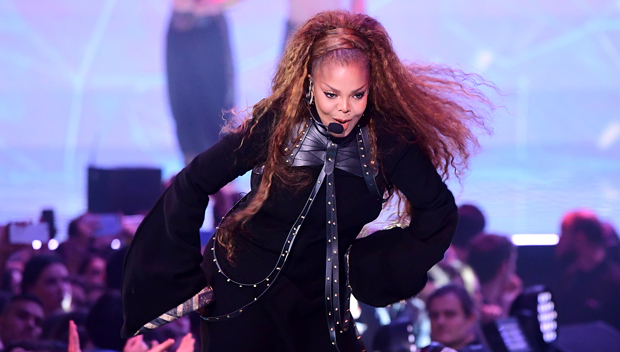 She’s a music and fashion icon, so are we really surprised that Janet Jackson looked hot at the EMAs on Nov. 4? Check out her sexy look.

Janet Jackson, 52, decided to remind the world why she’s a beauty and style icon when she hit the stage at the MTV Europe Music Awards on Nov. 4. The mom-of-one wore an Afro-centric, black, all-in-one pantsuit as she sang her song “Made For Now” and gave a mini-performance of her classic pop hit, “All For You.” With her hair scrapped back into a high ponytail, the singer honestly looked like she’d stepped out of the 1990s and didn’t have a wrinkle in sight!

We’d expect nothing less from the “Rhythm Nation” queen who has delivered some of the most memorable fashion moments in pop music history. Seriously, when you think of one of her videos, what springs to mind? It’s not just the melody, the beat and the ridiculously cool dance moves, what sticks in the mind is what Miss Jackson (if you’re nasty) was wearing. She was decked from head to toe in all black, combat-style pants, jacket and boots for the afore-mentioned “Rhythm Nation” video in 1989. That year she kept it simple but sexy for her “Black Cat” video – skin-tight black pants, white shirt, buttoned up just enough to reveal her black bra underneath.

For her 1993 hit, “That’s The Way Love Goes” she went for a more bohemian look – soft honey-brown curls, a belly baring cropped waistcoat, black loose pants and a beaded choker around her neck. Recently she looked like an African queen in her “Made For Now” video, which dropped in August. She looked regal in a print, floor-length Lavie By CK print dress, designed by Cameron-born Claude Kameni.

We could go on, but Janet’s had a long solo music career (36 years) and we don’t have that kind of time! But you get the point! So today’s stylish look just reinstates her position as a fashion icon. And it’s another look that we’ll remember for a while.