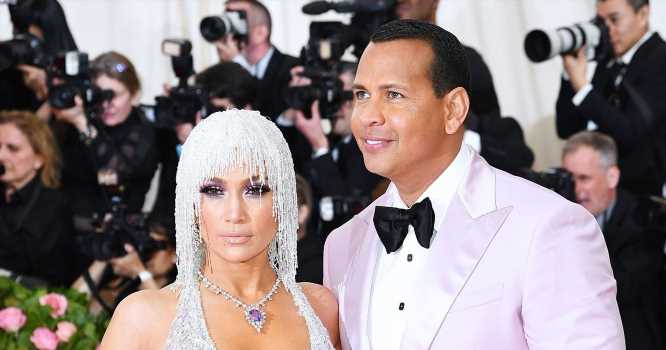 Fierce fiancés! Jennifer Lopez and Alex Rodriguez attended the 2019 Met Gala on Monday, May 6, where they walked their first red carpet since getting engaged earlier this year.

Lopez rocked a diamond head piece and cleavage-baring Versace gown with a high slit which she paired with a Harry Winston necklace for the occasion, while Rodriguez went with a pink suit jacket and black slacks.

And this wasn’t the first time the fundraiser for the Metropolitan Museum of Art’s Costume Institute in New York City has played a big part in the couple’s relationship. Rodriguez, 43, and Lopez, 49, made their red carpet debut at the 2017 Met Gala, less than three months after they started dating.

For their first official public outing, the Second Act star stunned in a light blue Valentino gown with a cape that she paired with statement diamond hoop earrings. The former New York Yankees player, for his part, sported a dark blue Tom Ford tuxedo.

Rodriguez popped the question to Lopez during a romantic Bahamian vacation in March. The twosome announced their happy news in matching Instagram posts. “She said yes,” the athlete captioned a photo of the pair’s hands with Lopez’s gorgeous $1.4 million, 15-carat classic emerald-cut diamond engagement ring on full display.

Though Lopez and Rodriguez had been dating for two years at the time of the proposal, a source told Us Weekly that the “Jenny From the Block” songstress was surprised that it happened.

“They’ve talked about marriage and have always planned to spend the rest of their lives together, but they were so happy with exactly how things were, they weren’t sure if they wanted to go down that road. It’s almost like they didn’t want to jinx it,” the insider told Us. “Marriage is something that became important to both of them and their kids. They know they want to make this commitment to forever together.”

Lopez shares 11-year-old twins Max and Emme with ex Marc Anthony while Rodriguez is dad of daughters Ella, 11, and Natasha, 14, with Cynthia Scurtis.

Scroll down to see photos of their night!