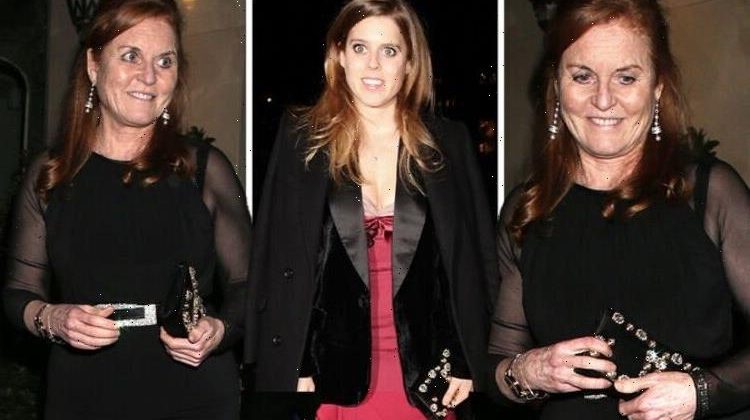 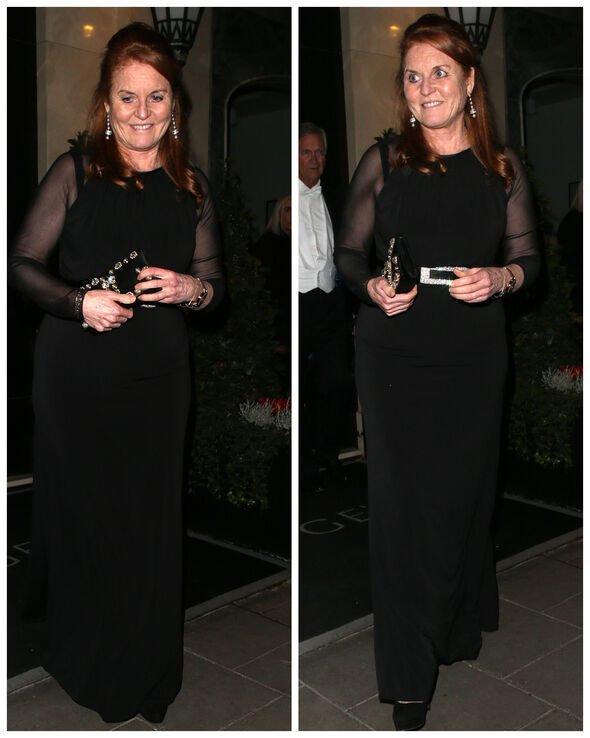 Sarah Ferguson dressed to the nines on Thursday evening to attend Joan Collins’ 88th birthday and 20th wedding celebrations at Claridge’s Hotel in London. Princess Beatrice and Eugenie’s mother looked glamorous in a black gown with sheer sleeves and a sparkly belt. The sleeves were sleek and sheer while the rest of the dress was fully black from the neckline all the way down to her feet.

The floor-length dress meant the Duchess’ shoes were not on display.

She completed the look with sparkly drop-earrings and her red hair was styled in loose waves.

The earrings were silver and sparkly and featured six jewels in a drop fashion.

These perfectly complemented the glittering belt on the Duchess’ dress.

However, the Duchess of York included a sentimental nod to her eldest daughter, Princess Beatrice.

However, this clutch was previously worn by Princess Beatrice in 2018.

At the time, Princess Beatrice of York was seen at the Vogue and Tiffany & Co party at Annabel’s club after attending the EE British Academy Film Awards.

These took place at the Royal Albert Hall on February 18, 2018 in London.

On Thursday night, Fergie accompanied her outfit with a tan watch.

However, the royal chose no other bracelets or rings to go with her dress.

One fan, @_emma_hurley_ said: “I quite like this for Sarah. I understated it’s age appropriate – but it’s a hit from me.”

Another fan, @birdnerd327 added: “I quite like her outfit and I’ve never seen it before!”

However other royal fans were not as impressed with the Duchess of York’s attire.

One Instagram user @allthingsruby2 wrote: “Both unfortunate looking,” in response to Fergie and Beatrice.

Earlier in the day, the royal was pictured being driven through Windsor Great Park in her Range Rover.

This was the first time Fergie had been seen since the Prince Andrew legal settlement.

She had temporarily paused her YouTube channel, Fergie & Friends, where she used to read a children’s book every day. Her last video was posted on December 31, 2021.