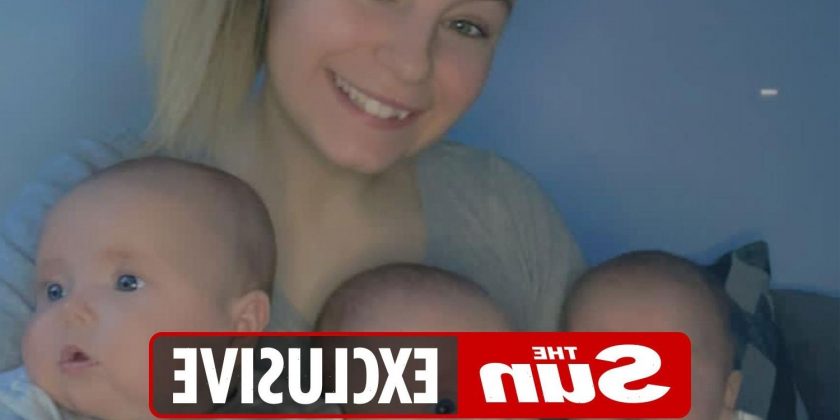 AS A single mum to four kids under three, including triplet babies, Chloe Burton's life is nothing short of hectic.

The 20-year-old mum, from Wilnecote, Staffordshire, is now making a name for herself on TikTok by talking about her manic life, where she has 49,500 followers and strangers have lavished her with gifts worth £3,500. 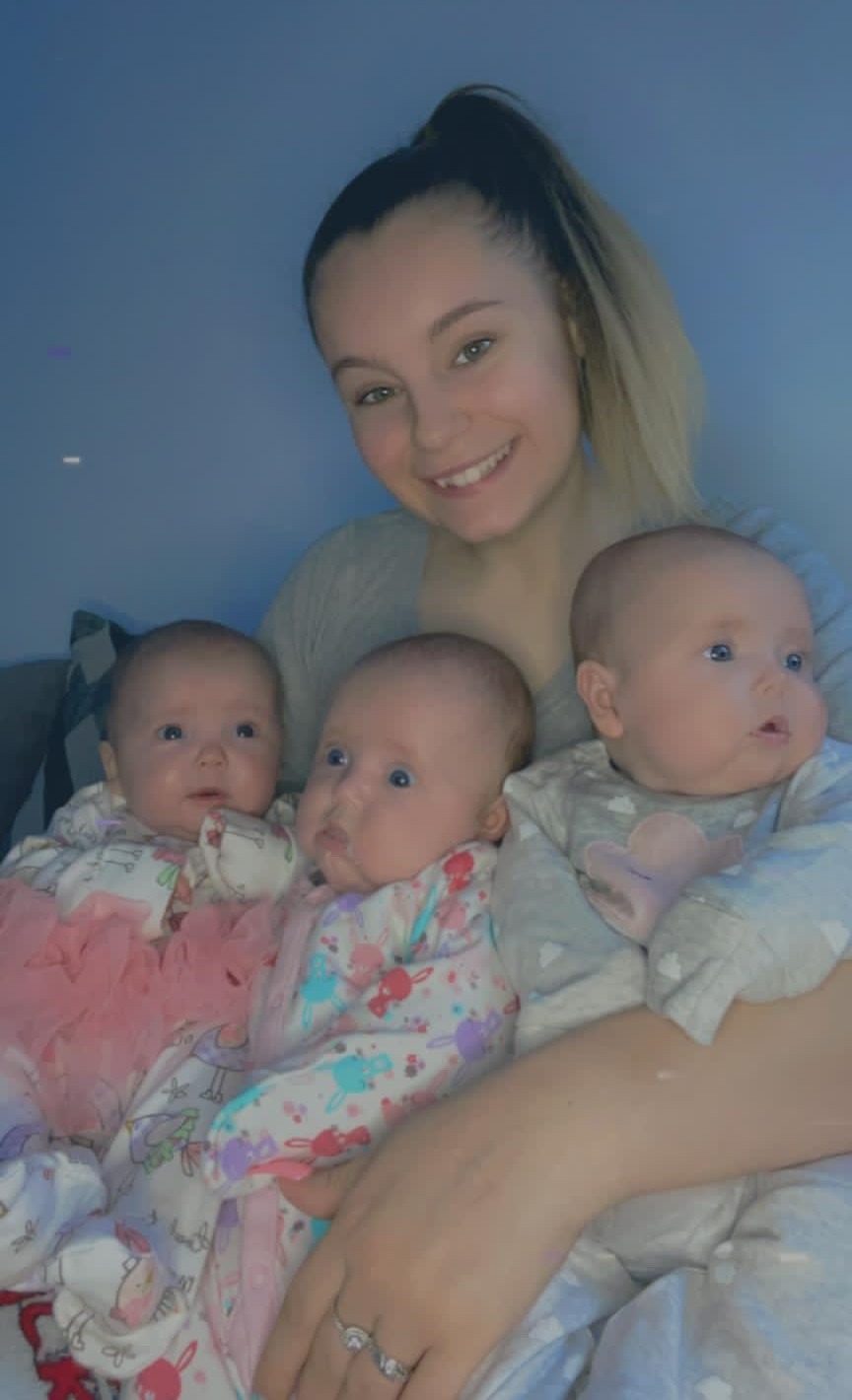 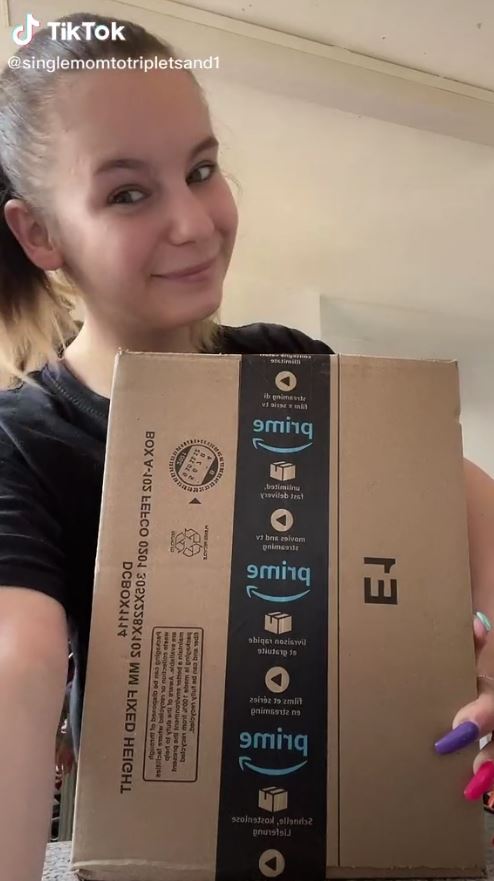 But she's also been bombarded with hate from trolls, who call her a "scummy mummy" and say awful things about her kids.

Speaking to Fabulous, Chloe says: "I set up the Amazon wishlist when I was pregnant, just for family and friends who I couldn’t see due to Covid.

"I added a link to my TikTok and Instagram, because someone asked me to. People just started messaging me saying ‘oh I bought you this, we bought you that’, which I wasn't expecting. 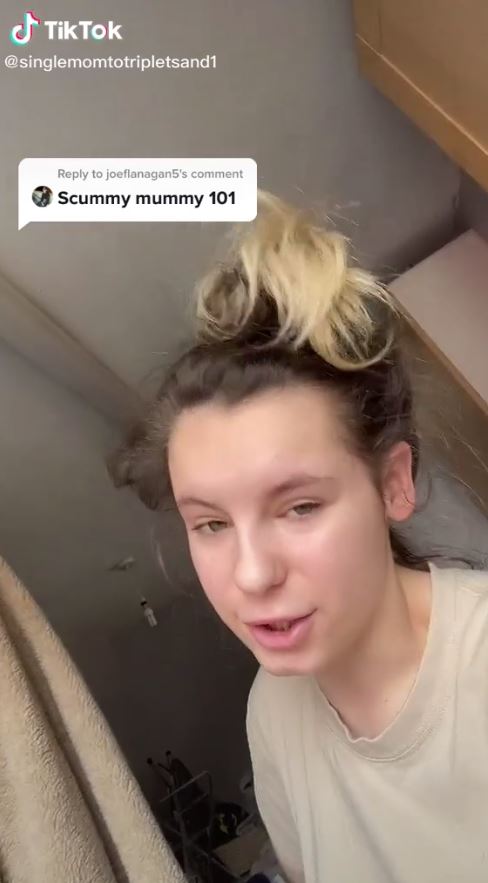 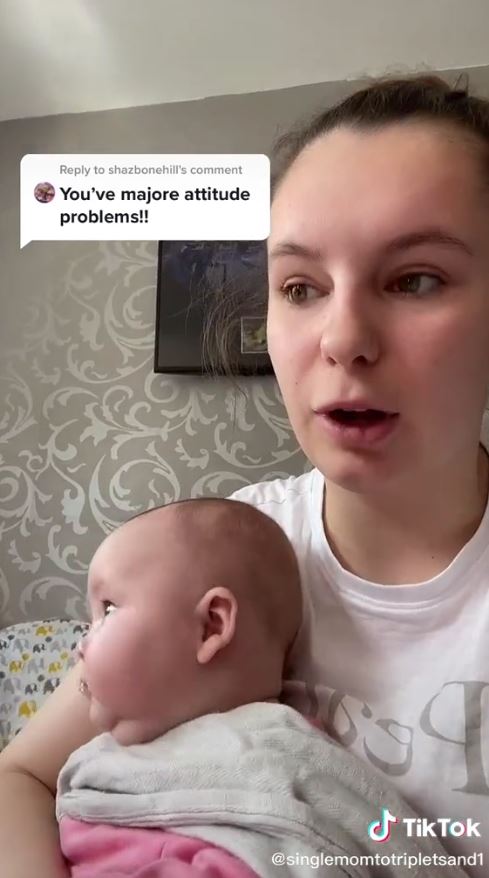 "I’d say ‘you genuinely didn’t have to’ but the next thing I knew, I was getting sent stuff left, right and centre.

"I’ve been bought 295 gifts, so many. It’s mainly stuff for the kids like toys, books or baby wipes, then loads of clothes.

"But people moaned at me because I never had anything on there for myself, so I added some cleaning stuff and make-up.

"I put some of my older child AJ’s favourite foods and chocolate on there too.

"Then my address got leaked so I asked my followers to buy security equipment to keep me safe, like a camera set costing £140."

People just started messaging me saying ‘oh I bought you this, we bought you that’, which I wasn't expecting. I've been bought so many things

Then in June last year, just days before Chloe's 20th birthday, she discovered she was pregnant again.

She had her scan a couple of weeks later, as doctors thought Chloe was further along than she really was, and realised she was carrying triplets. 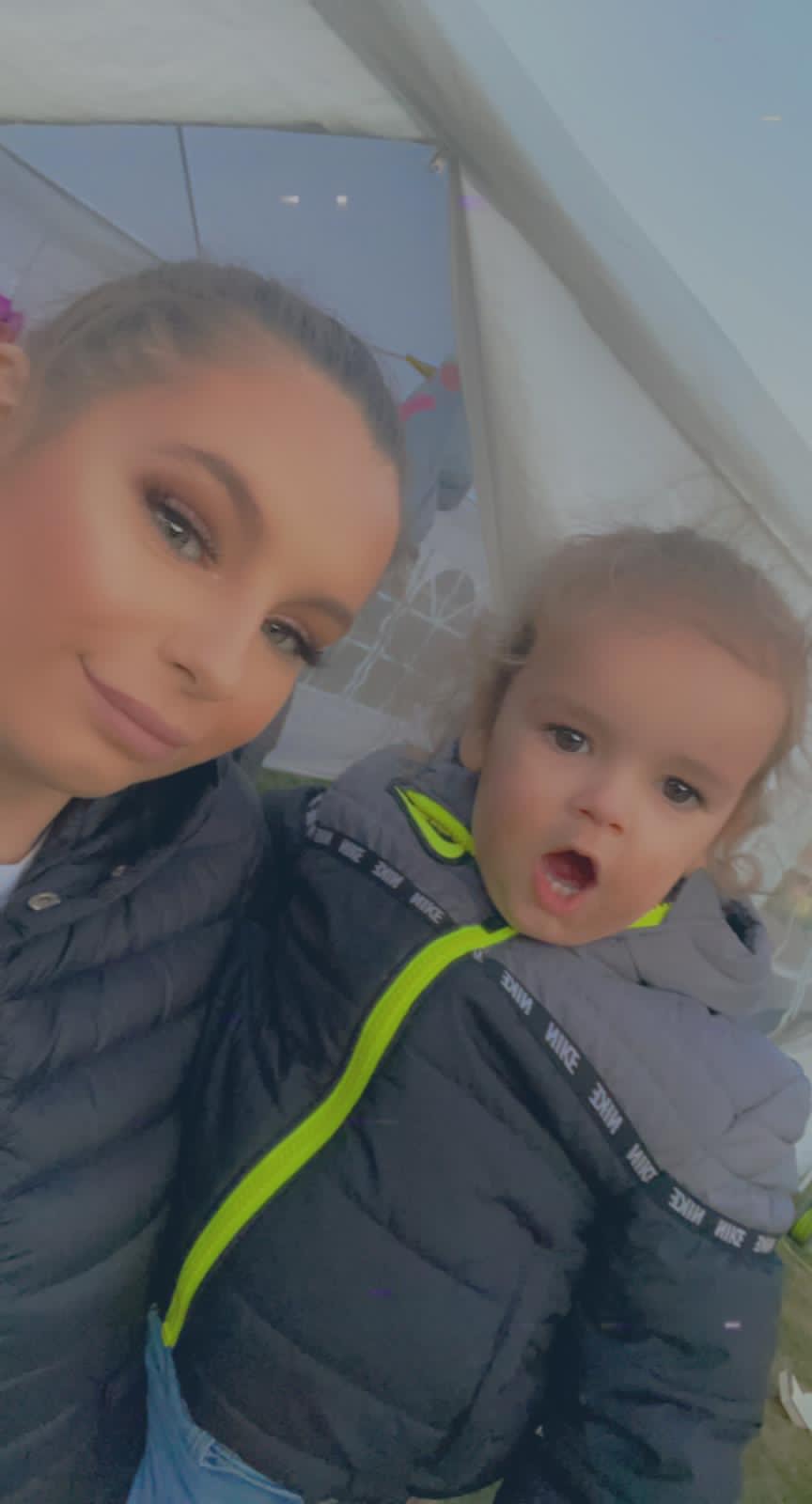 She says: "I was very scared and shocked, I don’t think anyone ever prepares themselves to go to a scan and find out it’s multiples. I was only actually five weeks pregnant when I had the scan.

"Multiples run in my side of the family but no-one normally makes it past 14 weeks.

"I’ve had relatives miscarry and I was a twin, but my twin passed at 14 weeks. So for me to make it to full term with triplets was a big thing.

"My pregnancy was perfect, no problems whatsoever, it was just like carrying a normal baby – except heavier. My bump was very big."

My life is definitely hectic. I use two whole jumbo packs of 74 nappies a week and six tubs of baby formula, the large 800g ones

When Chloe was four months pregnant, she split from Rosse – although he's still a big part of their children's lives.

At 34 weeks and five days, on January 21 this year, Chloe gave birth to her triplets via C-section after doctors realised one of her baby's cords was affecting their blood flow. 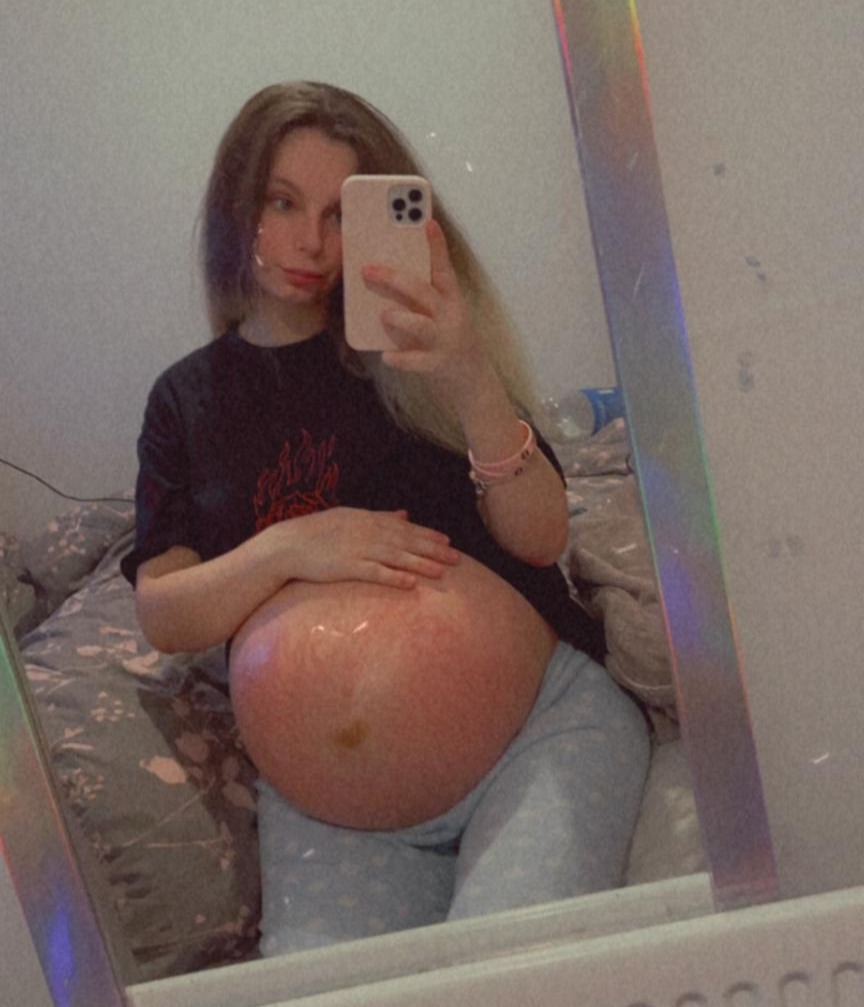 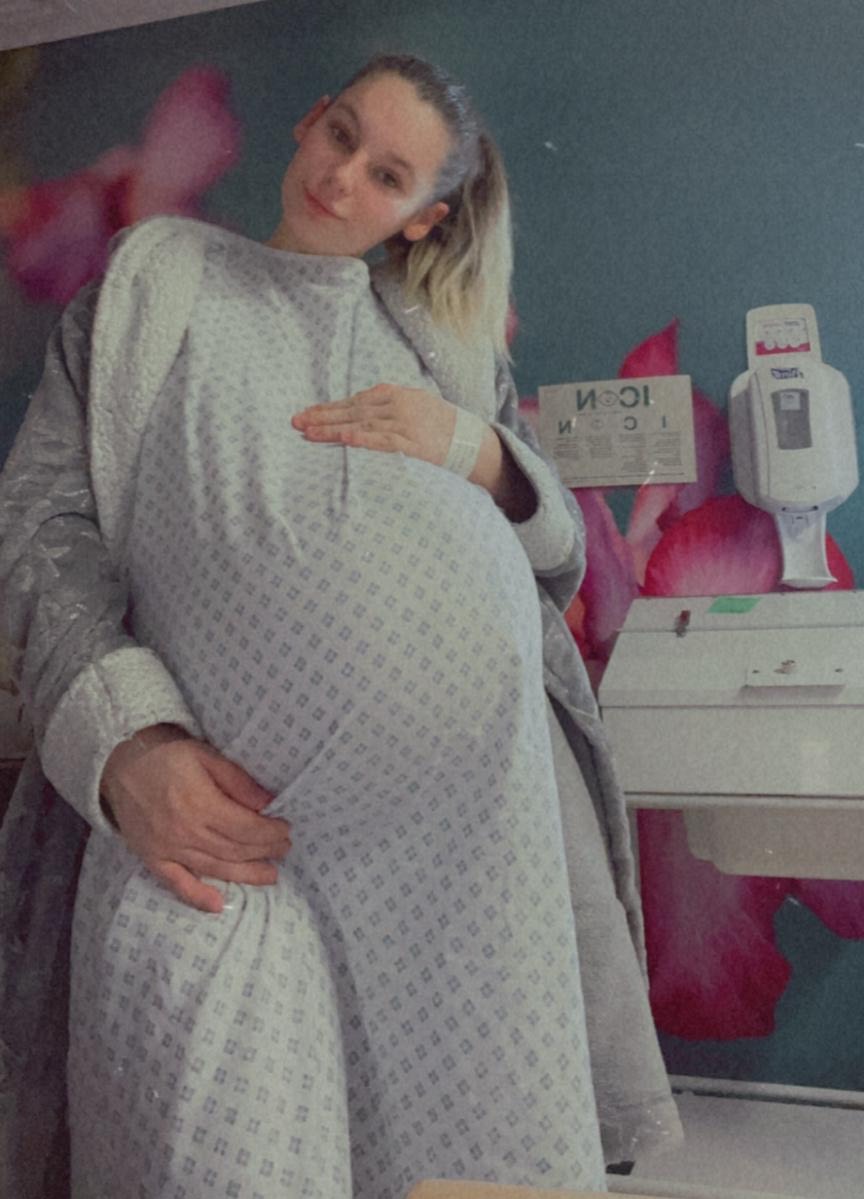 She says: "Doctors were scared if my pregnancy went on any further, the blood flow might completely stop and we might lose Wynter, so they booked me in for a C-section the next day.

"Sienna’s head was really low as well, which was causing pressure and sharp pains on my pelvis. I was told I couldn’t have gone into labour naturally.

"Their dad’s in the picture and was there for the C-section. He sees the kids every day and stays over quite a bit.

"With the babies being so small, it's hard looking after them all every day on my own. Rosse helps when he can, but we didn’t work as a couple."

Baby formula: Six tubs a week, the large 800g ones

Laundry: 4 loads each day on the weekend

After the birth, Wynter was taken to the neonatal intensive care unit (NICU)for 48 hours, where she was given oxygen.

A week later, the family came home from hospital and Chloe was reunited with her son, who had been staying with her parents.

She says: "It was weird, it didn’t feel real, it still doesn’t feel real now. It’s like a dream, I loved having all four of my kids together but I was also thinking ‘this just can’t be true’. I think my girls are a miracle.

"My life is definitely hectic. I use two whole jumbo packs of 74 nappies a week and six tubs of baby formula, the large 800g ones.

"I leave the laundry to build up during the week, then I’ll do four loads of washing each day on the weekend.

"Luckily all my kids sleep through so I do actually get quite a lot of sleep.

"I normally wake up between 7am and 9am with all four kids. I'll give my little man his tablet and juice while I feed the girls, then he’ll lay in his bedroom while I sort the girls out.

"When they’re all fed, changed and winded, I’ll change AJ and put him in fresh pyjamas.

"Then I’ll give him breakfast, pop the girls in their chairs, do some cleaning, then do lunch, give the girls their next bottle, do some more cleaning, watch some films with AJ, try and read a book with him.

"Then it's more cleaning, dinner and bath time. Then we’ll chill and watch some TV, try and read another book with AJ if he’ll let me, play Play Doh with him, feed the girls again and then it’s bedtime for AJ at 9, the girls will be in bed by 10pm and I go to bed at midnight." 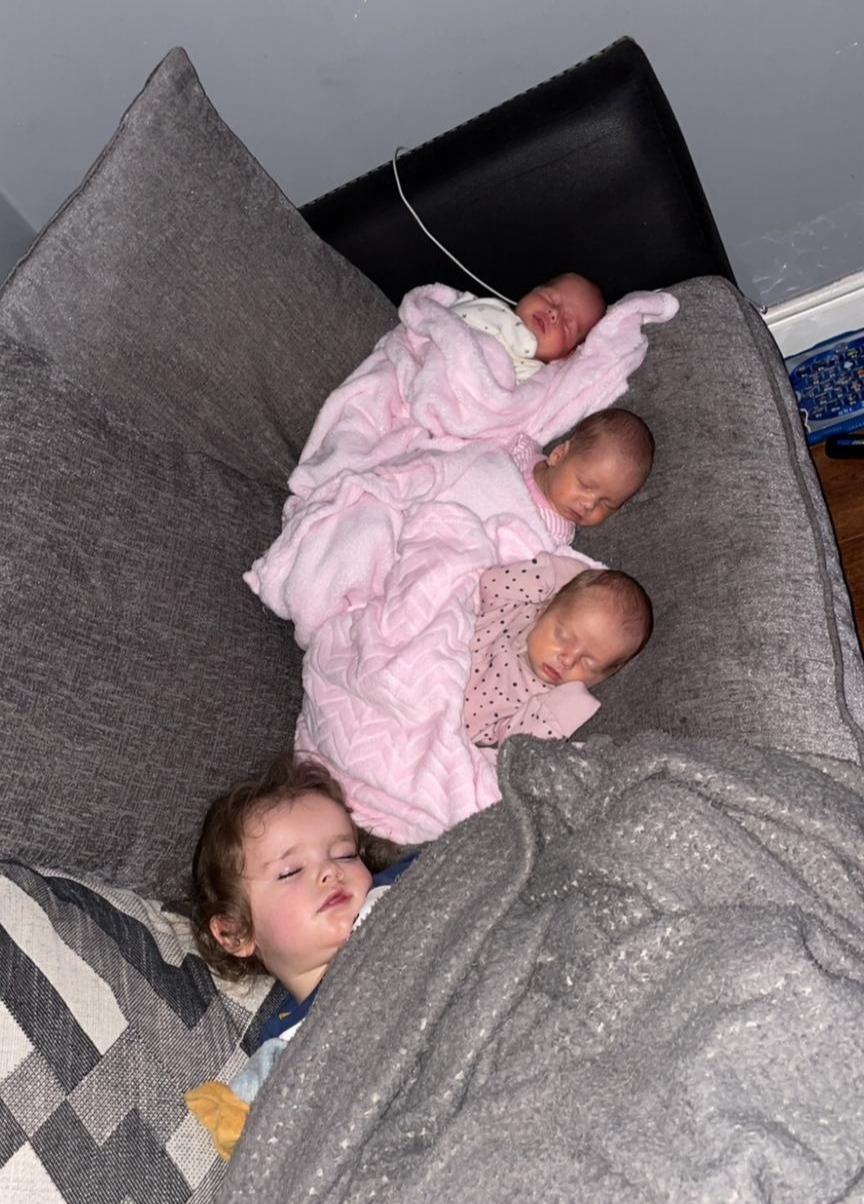 Chloe started her TikTok account when she was pregnant with AJ, initially just to watch other people's videos.

When she was 20 weeks pregnant with her triplets, she posted a video of her dancing and showing off her belly to announce her new arrivals, which went viral.

Chloe says: "I started doing cleaning videos and day-to-day life, showing me going to appointments and answering questions. I got a lot of followers but then my account got banned, so I had to make a new one.

"It was for stupid, untrue stuff. Someone reported me for ‘harassment and bullying’ on a video of me and my daughter dancing.

"They reported one of my cleaning videos for ‘child endangerment’. It just show, TikTok don’t watch the videos before they block the accounts.

"I think people were jealous of how popular my account was getting, I know other girls it’s happened to who had 690,000 followers. And I’ve had over a million hits on individual videos.

"I get loads of trolls and hate on TikTok. I get told I'm not parenting right, I’m not feeding the girls enough or I get hate because I split from my baby dad.

"The worst things are nasty stuff that gets said about the kids. I've been told I should have aborted my girls and I’ve had other nasty comments like ‘who would want to have kids with you? You’re rough’.

"I get told my kids should be killed. I’ve realised now to just rise above it and carry on, because it’s clear they come from a fake account.

"Sometimes I just laugh it off, but I do bite back if they’re really nasty. Normally people stick up for me in the comments anyway, the people who watch me on a daily and know I’m a good mum.

"I think people should get off my page and keep scrolling if they don’t like what they see. My life is amazing, I wouldn’t have it any other way."