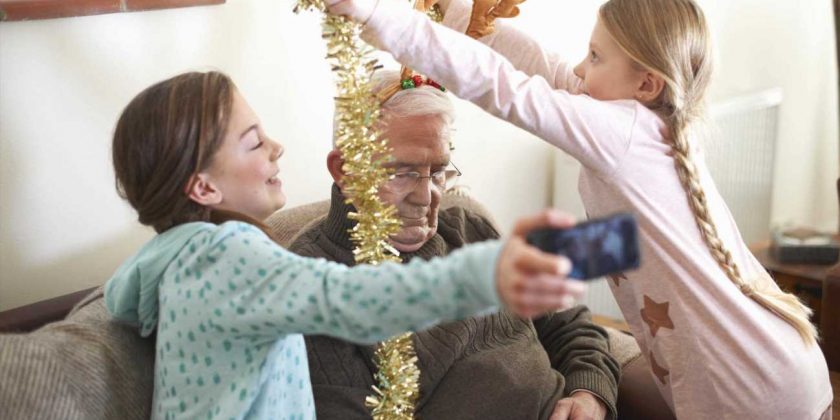 YOU'VE bought your gifts, you've dug out the stockings, the baubles are on the tree and you've even treated yourself to a second mince pie… you've just got one more thing to worry about this Christmas.

You can prep, plan and pre-order but you can't force your children to be the gorgeous little angels you know they can be, when the big day comes.

The combination of present excitement, fun Christmas telly and all the sugar known to man, mixed with stressed out parents trying to time Christmas dinner and fractious old folks who just want the Queen's speech and a quite sherry, can be a nightmare.

Aware of the potential pit falls, child behaviour expert Sophie Giles spoke exclusively to Fabulous about how you can ensure that this year's festivities are smooth sailing.

She said: "Christmas can be armageddon. Nursery or school has inevitably been hyping up your children very early on.

"Your little ones will have seen the decorations on every corner and the trees in everyone's windows since the end of November.

"All of the bright lights and fun just puts them on high alert way before Christmas has even started."

On top of all the yuletide glitz and sparkle, there's also the anticipation of presents.

It won't be long before your brood are marching round every shop explaining what they want, pointing at adverts on the telly and writing long lists for Santa.

All of this can be particularly stressful for parents.

Add to the load, the fact that elderly relatives may be coming to join the day, with their own ideas of whether children should be seen and/or heard, and you could be set for disaster.

Sophie, who founded Gentle Start Family Consultancy, said: "If children aren’t used to being around people, their behaviour can vary. So it's important to do a few things in the run up to manage the situation as best you can."

Leading up to Christmas

As Christmas fast approaches, Sophie suggests giving your kiddies a time table of what happens when.

She said: "I suggest starting with timetable for kids, this means they're not constantly asking what's going to happen and when.

"Young children respond quite well if you can measure things in the number of sleeps."

You could design your own picture calendar for this or even mark up their advent calendar with dates like their last day at school, the day they'll have visitors, the day they're hitting the shops for presents and other big milestones.

Sophie also suggested that older children, who are three years plus, practice gratitude in the lead up to the big day.

She said: "You can role play scenarios with them where they receive a gift that they didn't like and teach them to graciously say thank you to the person who gave it to them.

"If your child was hoping for a paw patrol toy but got socks from Auntie Jean instead, ideally you'll want them to give a kind thank you, and then they can come and complain to you about it later when they're away from the offending relative.

"You obviously don't want to harp on about this, but it doesn't hurt for children to realise that there are others who don't get presents at all or have very little.

"You can encourage them to take part in a shoe box Christmas challenge where they fill a shoe box with presents and give it to charity."

In another move to encourage gratitude, Sophie recommends bringing back the old art of letter writing.

You can role play scenarios with them where they receive a gift that they didn't like and teach them to graciously say thank you to the person who gave it to them.

She said: "Sending a thank you letter or a thank you picture is also a great way to let that person who gave them a gift know that they are in their thoughts and it was nice to see them."

If you're not keen on the daily chocolate intake of an advent calendar, Sophie also suggested an Elf on the Shelf as the perfect fun alternative to move around each day and allow the children to find.

Stack the odds in your favour for the big day but putting in some ground work a few days before.

Sophie said: "Make sure children are getting enough sleep in days directly before. They probably won’t sleep well on Christmas Eve and you don’t want a grouchy sleep deprived child at the table.

"Then make sure they've had a decent breakfast on Christmas morning so they don't have low blood sugar when it gets to time for lunch.

"Next up, you'll do best with a strict no screens at the table rule."

In order to minimise the risks Sophie suggests tailoring the meal to the children.

She said: "It is a long meal can get boring for young ones.

When children are dehydrated they'll find it hard to focus and the won't have the same emotional regulation.

"I would let them each bring one or two toys that they’ve been given. Make sure it's nothing loud or with bright lights, but maybe a couple of stocking fillers.

"Then while the adults are talking they can whip out their toys and play with them. They can even explain them to the adults.

"Wobble cushion are perfect for children with mild ADHD or who just can’t sit still as they act as the perfect sensory aid.

"Also don't forget to keep children hydrated, as when they're excited by everything that’s going on, they're likely to forget to drink water. This will mean they'll find it hard to focus and the won't have the same emotional regulation."

While sugar has a way of getting kids all hyped up, you wouldn't want to completely deprive them of all things sweet on the special day.

Sophie said: "If you have set times for sugar, they're not going to be constantly asking you for treats, because they'll know when they're next chocolate or pudding is coming.

"But be fair to them, if you have loads of chocolate in the house for guests or hanging on the tree, you can't expect them not to eat it.

"So if you are keen to restrict sugar on the day, make sure you remove temptation."

Keeping the noise down

It may be that the old folks are hoping for peace and quiet and you're stuck juggling a disgruntled great aunt and a manic four-year-old.

Sophie said: "It’s Christmas day so I would be worried if a child was incredibly quiet all day.

Every child will get cabin fever if they don't go outside once or twice.

"If you need to keep noise to a minimum, you could have set periods when they’re outside. That way they can burn off that energy and have a run around the garden or the park and play with some of their new toys.

"Every child will get cabin fever if they don't go outside once or twice."

Another great tool for getting a bit of peace is setting a Christmas movie time.

Sophie said: "You could also coincide some set screen time with when Great-Auntie Mildred wants her sherry-induced nap.

"If you do want to watch a Christmas movie, ideally you wouldn't do so too close to bed."

Managing the stress and excitement of present time comes with it's own unique challenges.

Sophie said: "Muddling up the presents is actually quite common so in my house, the elves use a different coloured wrapping paper for each child.

"When it comes to opening their gifts, create space around each child.

When anyone gets a nice new toy (even if they're an adult) they don’t want to share it straight away.

"Children tend to group together when opening presents. But if they're in a huddle they won't focus on what they have but will be comparing.

"Find a room with a bit of space – you could even enforce the covid 2m apart!

"If a child is particularly disappointed by a present you could say: 'Father Christmas chose these presents especially for you. So they must be pretty wonderful and he must have thought that you’d really like them'."

But what about sharing? Should children have to share their toys? Sophies not keen on forcing children to hand over their gifts.

She said: "Yes, we want to encourage children to learn how to share, but that doesn't have to be immediately.

"When anyone gets a nice new toy (even if they're an adult) they don’t want to hand it over straight away.

"You should make sure a child has had a reasonable amount of time with their own gift before insisting they give their brothers/sisters/cousins a turn.

"Also don't make your child hand over something to a younger sibling that they are too young to play with and may just break! There's nothing more disappointing.

You can find more information on parenting and behavioural consultant Sophie Giles and the consultancy she founded on their website: Gentle Start Family Consultancy.

For in other news, this how to get paint and play dough out of everything.

Plus here's what you can do to stop tantrums in their tracks.

And ever wondered how to get crease free uniforms with no ironing? We've got you covered with this and so much more in our parenting section.