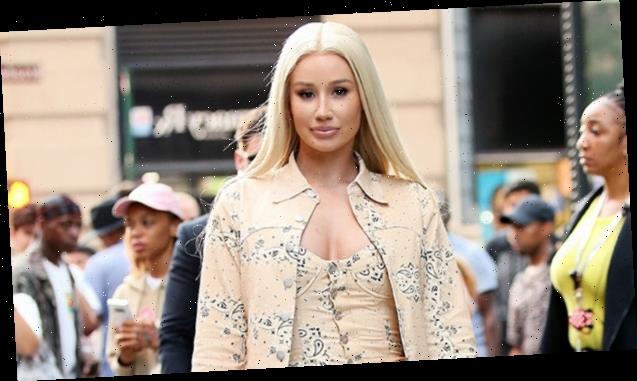 Special delivery! Iggy Azalea shared photos of herself wearing one of the new SKIMs velour sets, which she received as a surprise on her doorstep.

Iggy Azalea is showing off her post-baby body in a new set of sexy Instagram photos. On Oct. 18, she shared two pictures of herself wearing one of the new velour looks from Kim Kardashian’s SKIMs line. The outfit featured a crop top and matching pants, which put a sliver of her slim stomach on display as she struck a pose on the bed.

so surprised to see a box waiting at my door today – when I opened it up, it was this outfit! thanks @skims 💖

It appears that Iggy received the SKIMs look as part of a special surprise package, too. She captioned her photo, “So surprised to see a box waiting at my door today – when I opened it up it was this outfit! Thanks @Skims.” The rapper also included a pink heart emoji to show her love. Kim is often sending other celebrities her products, and it looks like Iggy made the cut this time around!

It’s hard to believe that it was less than six months ago that Iggy secretly welcomed her first child. The 30-year-old kept her pregnancy a complete secret, and didn’t even confirm her son, Onyx’s, birth until almost two months after he was born. She has made a point to keep her little one out of the public eye, and has yet to share photos of him on social media. Iggy also has not confirmed who the baby’s father is, but she has been romantically linked to rapper Playboi Carti since 2018.

In another recent pic, Iggy wore a skintight bodysuit from Fashion Nova. She posed for a photo with her backside to the camera, which truly showed off how the look hugged every inch of her figure. In the comments section, fans raved over how amazing she looked, which has been a common theme amongst all of her pictures of late.