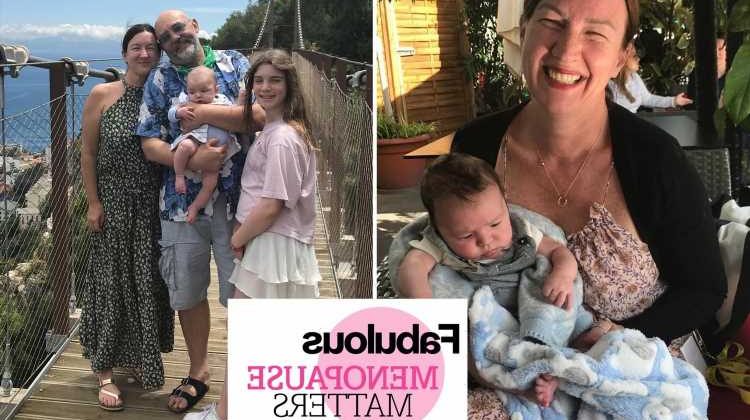 CLUTCHING a pregnancy test in my trembling hand, I crouched over the toilet in our bathroom and the faintest of blue lines appeared.

Staring at it in disbelief, I couldn’t believe the result was positive. It was a cheap test that I had bought from Poundland. “It must be wrong,” I told myself. 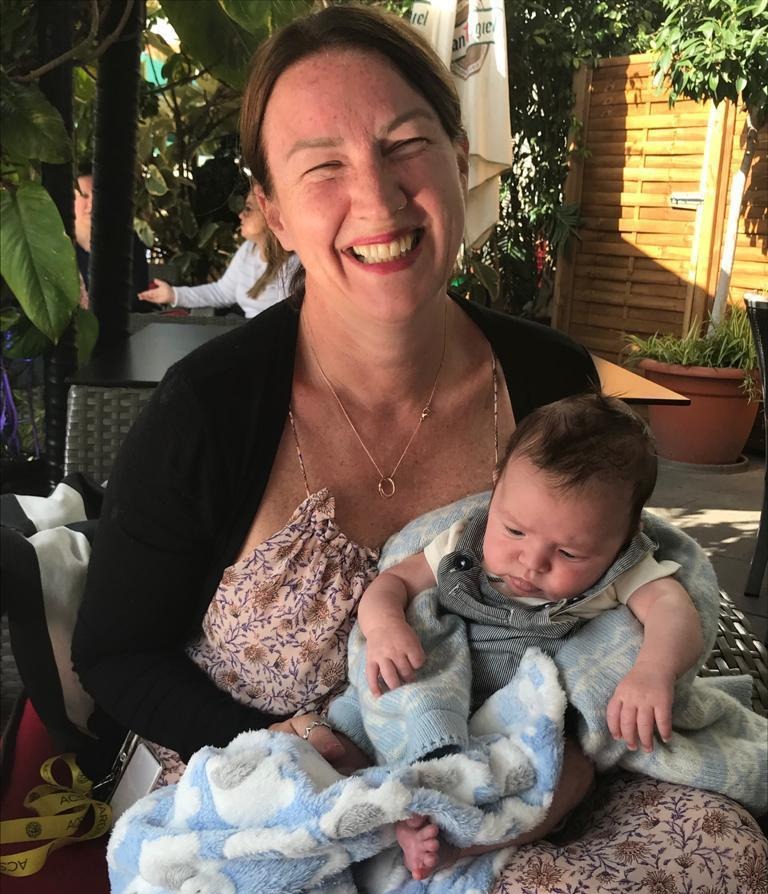 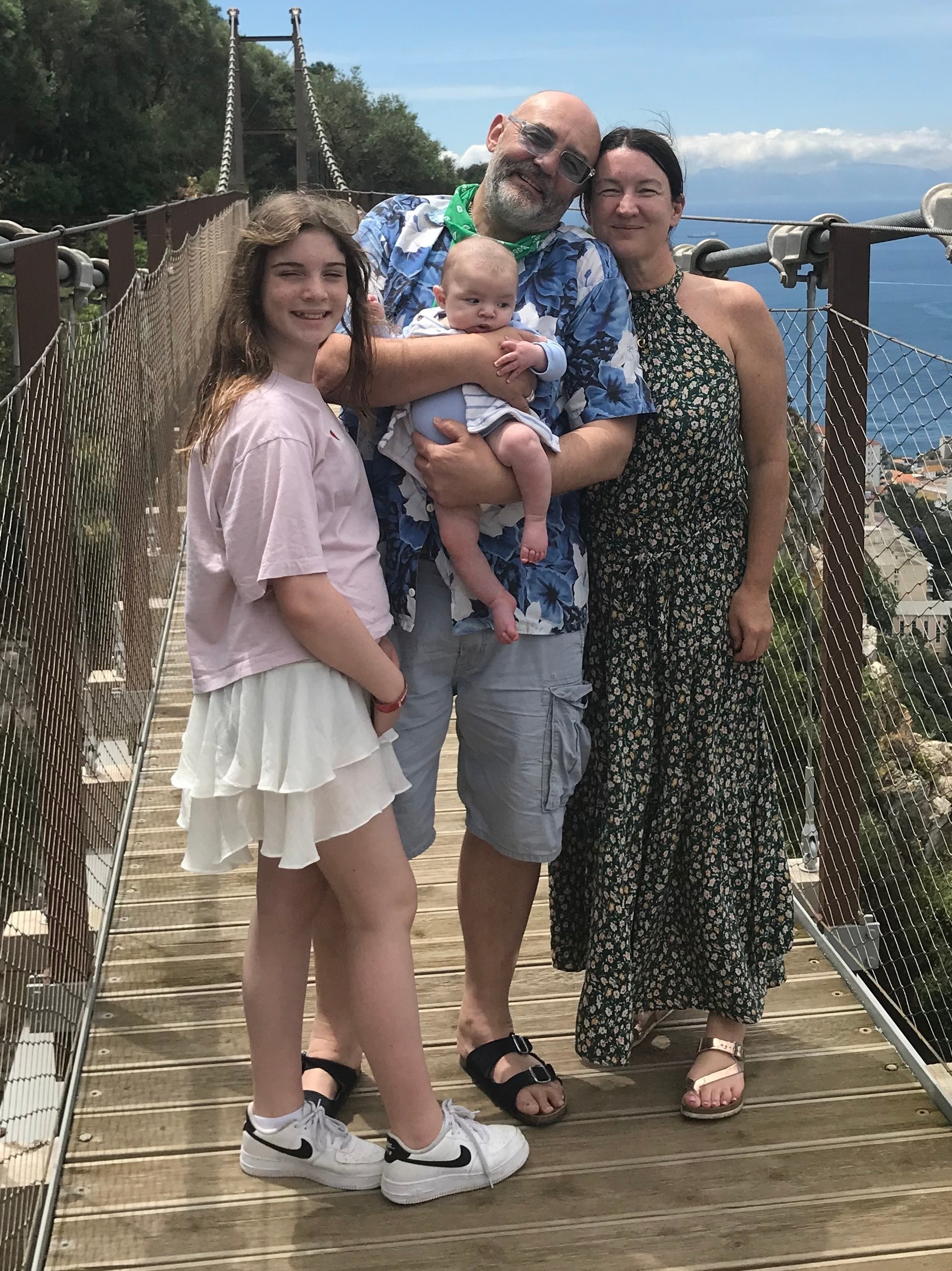 How could I be pregnant at the age of 47? Surely it wasn’t possible to naturally conceive a baby at my age.

Naively, I thought that I didn’t need to worry much about contraception in my mid-40s.

Having previously taken the Pill and hearing horror stories from friends about the Mirena coil, I decided not to have one fitted and we were using condoms most of the time.

For the past two years, I had been experiencing irregular periods, hot flushes, night sweats, insomnia and mood swings; all classic symptoms that I was about to enter the menopause.

I had been to the doctor to tell them about the crippling anxiety that was affecting me, mainly at night. They said it was most likely a classic sign of entering ‘that phase’ in my life and diagnosed amitriptyline, which helps to reduce worry and anxiety.

I had a blood test, which showed that I had high FSH (follicle‑stimulating hormone) levels, another sign that I was heading towards the menopause. This was at the beginning of 2020.

However, one thing that wasn’t affected was my sex drive. In fact, I felt like having sex even more and we generally managed it twice a week.

Even when lockdown happened, two months later in March, we were still enjoying an active sex life and using protection.

Last May, I started to experience what I thought was ‘lockdown fatigue.’ With all structure, regular exercise and normal sleep patterns out the window, I assumed that I was feeling shattered because of the upheaval in our household.

My period was nearly two weeks late but I thought this was either down to stress or being peri-menopausal.

But, in the back of my mind, there was a nagging thought that I might be pregnant.

After performing the first test, I decided to repeat one the following day; only for a much stronger line to appear.

I was definitely pregnant and now I had to break the news to Perry, on his 59th birthday!

I was nervous about telling him because we’d both agreed that we never wanted to go through the heartache that a previous pregnancy with down-syndrome twins had caused. Sadly, due to complications, it had ended in a termination in March 2019.

Prior to that, I had fallen pregnant in October 2017 and it was a complete shock. Perry and I only had been dating since April 2016.  But at eight weeks, I experienced a ‘missed miscarriage'.

Having both previously been married and, with five daughters between us, adding to our brood was not high on our agenda.

I was 34 when I gave birth naturally to Ella and 37 by the time that Amalie came along. Furthermore, the last time Perry had been a dad was twenty-one years ago, when his third daughter Poppy was born.

Some friends and family had told us we were too old to be parents again. But I never really believed at my age that I would ever fall pregnant naturally.

But on a sunny evening after a few glasses of wine to celebrate VE Day, and not being as careful as we should have been, Jude was conceived.

At the end of May, I found myself uttering the words to Perry: ”I’ve got something to tell you.”

He beamed and said: “You’re pregnant. But I already knew that.” He had already registered that my period was late.

My next step was to go to the early pregnancy unit at Kingston hospital for a seven-week scan and my heart was in my mouth.

Would there be a heartbeat? I couldn’t believe it when the screen showed a tiny dot flashing away and I let out the biggest sigh of relief. I was told the baby was due on January 29th 2021. It was hard to believe I would be 48 by the time I gave birth.

As the reality really began to sink in, I realised that it was nothing short of a miracle when I learned that the chances of conceiving naturally at my age are less than five per cent each month.

It’s highly unusual for a woman to get pregnant on her own after age 45 and with an older partner too.

Naturally, I was concerned as I had read that there's a higher risk of developing high blood pressure and diabetes for older mothers but blood tests and regular check-ups showed that I was fine.

We have calculated that by the time I turn 60, Jude will be leaving junior school, and Perry will be over 70.

Apart from a few bouts of morning sickness, my pregnancy was trouble-free until I reached 37 weeks and I contracted Covid at Christmas.

For the first week of January, I had mild symptoms of the virus including a splitting headache and persistent cough but the second week, I took a sudden down-turn and I found it difficult to catch my breath.

I went into hospital where I was admitted to a self-isolation room and monitored for 48 hours before I was taken for a chest X-ray. Worryingly it showed I had pneumonia. I was given antibiotics and kept in for another two days of observation.

Naturally I was petrified about the health of our unborn son but tests showed that his heartbeat was regular and all was fine.

Still, I couldn’t wait to see my consultant and, within a few days, I was back at the hospital to discuss what kind of birth I wanted. I asked for a scan which they were reluctant to perform at 38 weeks because they were so busy but I insisted.

They say a mother’s instinct is always right because the sonographer detected that very low amniotic fluid around the baby and that he hadn’t grown for nearly two weeks.

An estimated one in five of the UK’s population are currently experiencing it.

Yet the menopause is still whispered in hush tones like it’s something to be embarrassed about.

The stigma attached to the transition means women have been suffering in silence for centuries.

The Sun are determined to change that, launching the Fabulous Menopause Matters campaign to give the taboo a long-awaited kick, and get women the support they need.

The campaign has three aims:

50% of respondents said there is not enough support out there for menopausal women, which is simply not good enough. It’s time to change that.

A 37-week scan had predicted a birth weight of 9lbs but the baby was measuring around 7lbs.

I was immediately admitted back to Kingston hospital to talk about an induction with my consultant, who had to admit that I was right to be cautious.

On Friday 22 January, I was admitted to the labour ward and I was finally given a delivery suite on Saturday morning.  After several attempts to break my waters by a midwife, a senior consultant was called and a few more attempts proved successful.

Although I still had trouble catching my breath, the labour proved to be straightforward and, after about six hours of steady pushing Jude was born although he had difficulty breathing on his own and needed respiratory support.

He was taken to neonatal intensive care ward where they performed a Covid test, which came back negative and diagnosed with "wet lungs" – a respiratory disorder in a new-born caused by extra amniotic fluid in the lungs and prescribed antibiotics in case of any potential infection.

Finally, seven hours after the birth we were reunited with our son and I was transferred to a transitional ward for babies who have some kind of illness, where we remained for the next three days.

After five whole days in hospital, I was finally allowed home; and I have revelled in being an older mum ever since.

Some friends and family had told us we were too old to be parents again.

Before he arrived, some friends and family had told us we were too old to be parents again. And there is no denying that we are old.

We have calculated that by the time I turn 60, Jude will be leaving junior school, and Perry will be over 70.

Plenty of people think that’s too old, of course, and some have told us so to our faces.

I do get the sense that people feel they are entitled to an opinion on our business just because I am an older mum.

One friend raised the issue about how as older parents we will die when our child is still young. But my response was: “anybody can die at any age.” Other friends are concerned that I won't have enough energy in my late 40s and early 50s to raise a baby.

But I’ve always survived on less than six hours of sleep a night, so I’m not too worried about lack of sleep. To have the energy to be a new mother at any age is tough.

Older parents I guess may not be as energetic but Perry and I will be a lot more attentive and a lot more worldly-wise. Nothing's all good or bad. There's a positive and a negative for everything.

Then I have other friends who personally just can't relate to the desire to be a mother at my age. Some can’t wait for their teenage children to flee the nest so they can travel the world with their husband.

The thing is that I have never let having children stopped me from doing anything.

But on the whole, so many other friends have said they are delighted for us and couldn’t be happier.

The other night I was chatting to a record producer and his wife and they both said what a blessing it was to have had a baby at my age and an “exceptional gift" to have at this time.

I thought I was hurtling towards the menopause but mother nature it seems certainly had other ideas for me.

Ultimately I am living proof that being in your late 40s doesn't necessarily mean you are too late to have a baby. 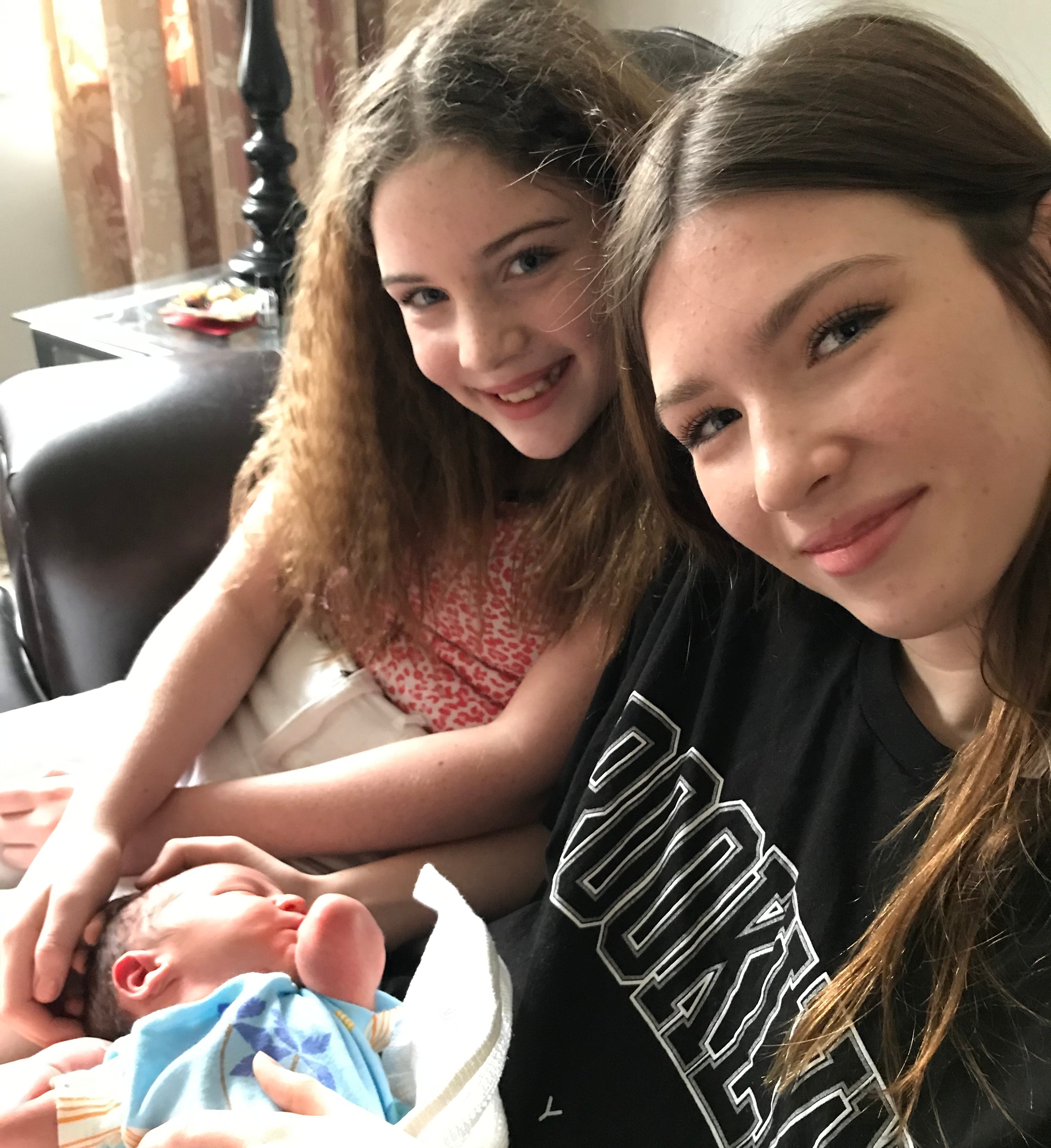 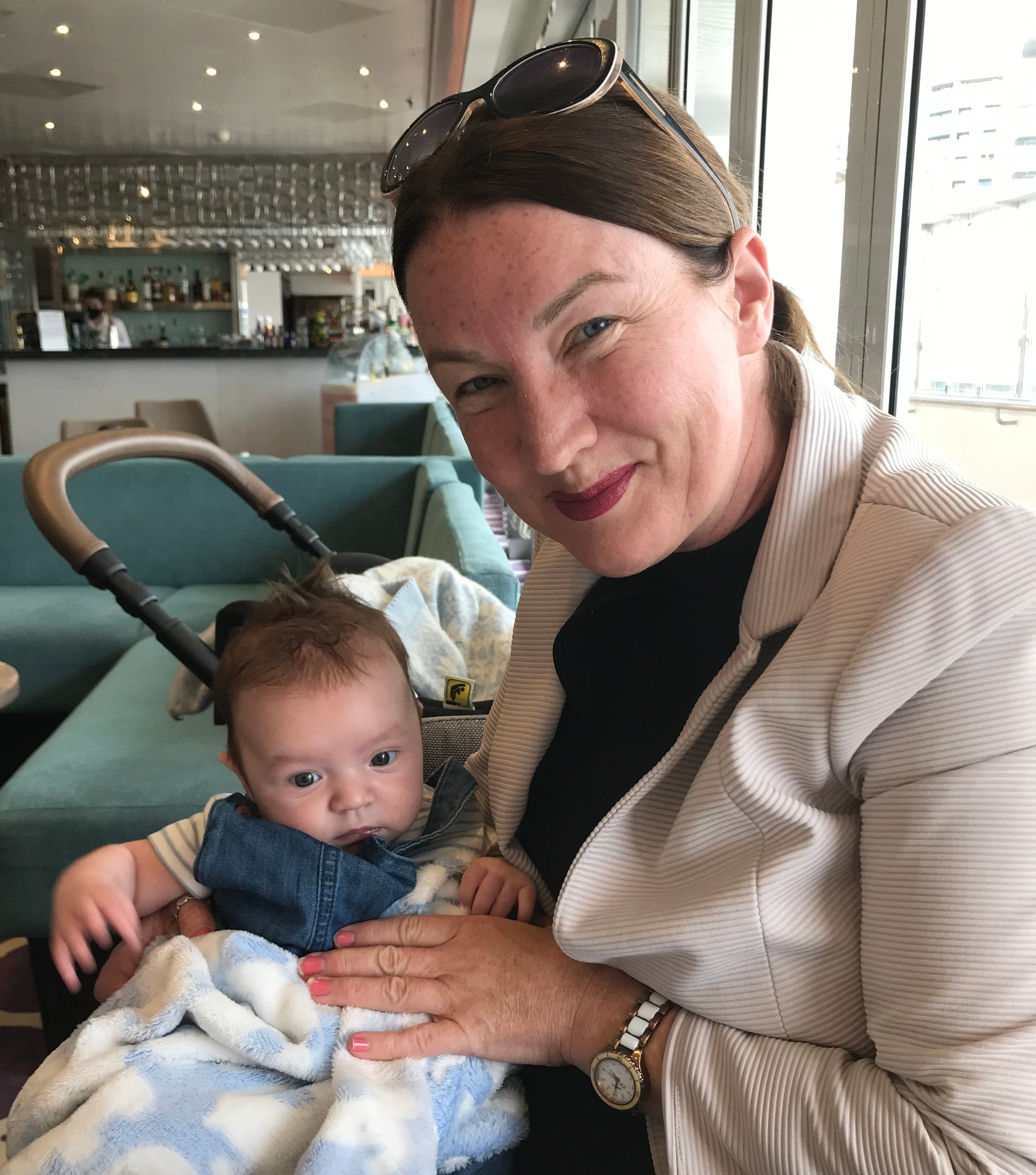 What is the menopause and what age does it usually start?

Menopause is a natural part of ageing, which usually happens when a woman is between the age of 45 and 55.

In the UK, the average age for a woman to go through menopause is 51.

It occurs when oestrogen levels in the body start to decline.

During this time periods become less frequent or they can suddenly stop, and after menopause occurs women will be unable to become pregnant naturally.

Around one in 100 women experience menopause before the age of 40, and this is known as premature ovarian insufficiency or premature menopause.

Many celebrities have spoken out about their own experiences, including Lisa Snowdon, Davina McCall, Michelle Heaton and Zoe Hardman.

What are the symptoms?

Menopausal symptoms can start months or years before your periods stop, and can last until four years or longer after your last period.

Elsewhere on Fabulous, I’m a child expert and this is why you should never use the word ‘willy’ or ‘foo-foo’ for your kids’ private parts.

Meanwhile, I’m a shopping addict who’s spent £200k on designer clothes – half still have tags on but I refuse to shop high street.

And I’m a charity shop worker & I’m fed up of sifting through skid-marked pants and dirty-crotched tights – it’s disgusting.