A MUM whose bump was so big that people thought she was having twins has naturally given birth to one of Britain's biggest babies – weighing 11lbs 5.5oz.

Ronny-Jay Fewtrell arrived into the world weighing the same as a bowling ball or a small dog when he was delivered at Worcestershire Royal Hospital. 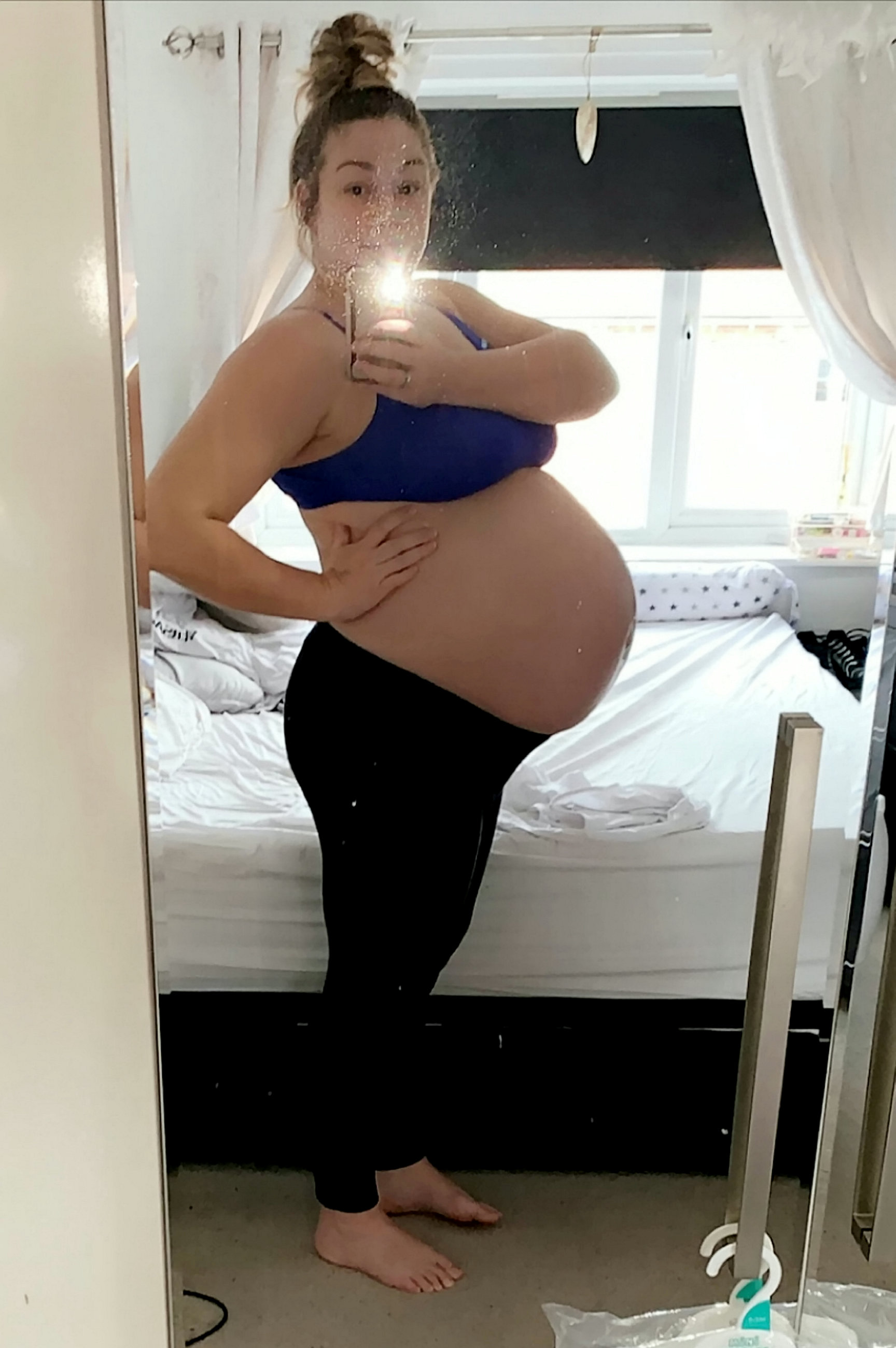 Stunned midwives revealed the super-size tot was the largest they'd ever had on their scales and even had to double-check his weight.

Jade Bayer, 33, said her son was so chunky he couldn't fit into newborn baby clothes and went straight into clobber for three to six month olds.

The mum-of-four gave birth naturally to Ronny-Jay at 5.49am on April 5, despite almost opting for a C-section during the lengthy 16-hour labour.

Throughout her pregnancy, Jade said her baby bump was bigger with her latest arrival than when she gave birth to twins. 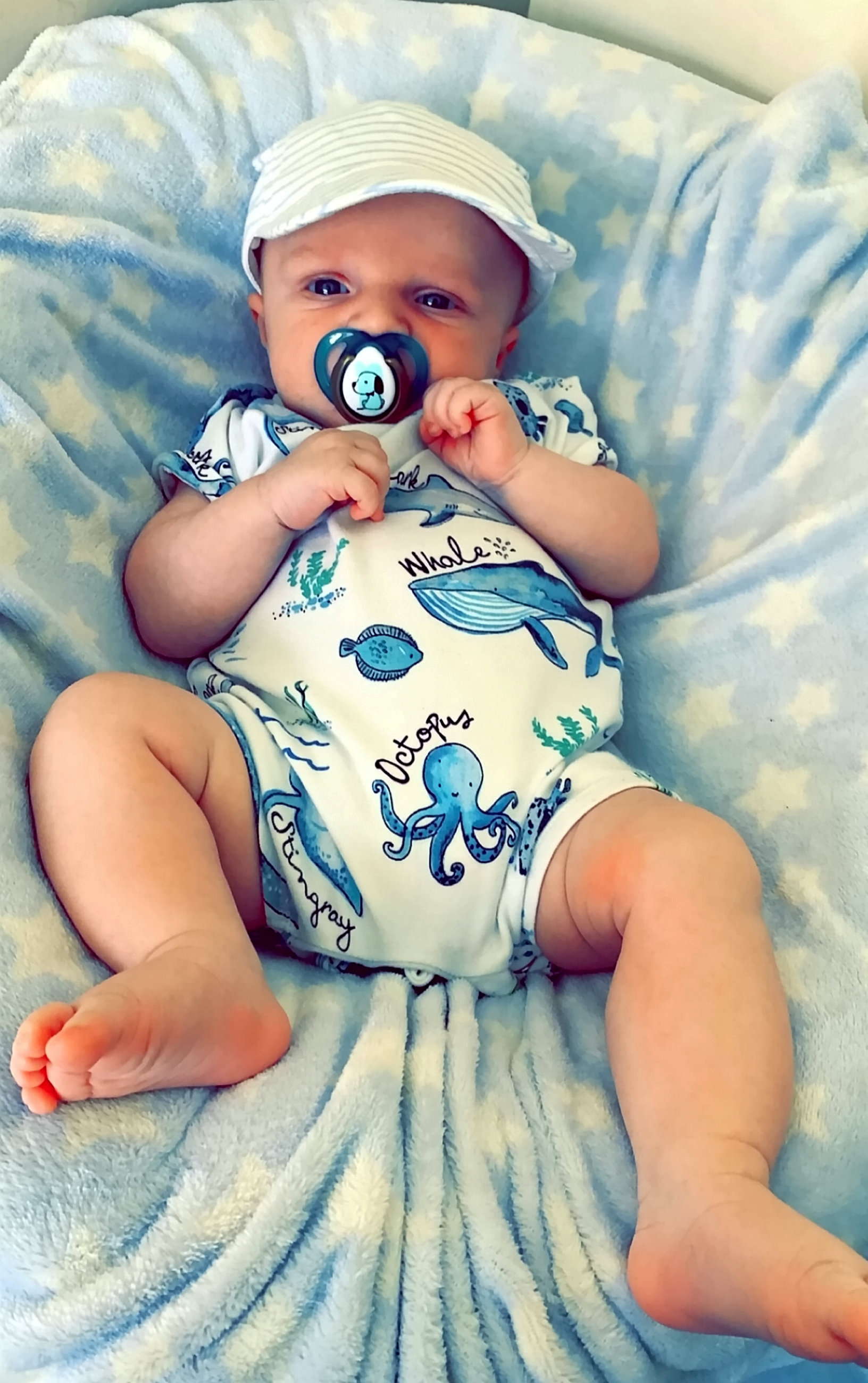 Jade, from Worcester, has already had to give up breast feeding due to being unable to keep up with the demands of her thirsty jumbo tot, who is now aged 12 weeks.

She said: "We had an inkling at the very beginning Ronny was going to be big.

"I was big straight away, there was no hiding my pregnancy from the beginning.

"A lot of people were joking it was twins again because I carried bigger with Ronny than with the twins. 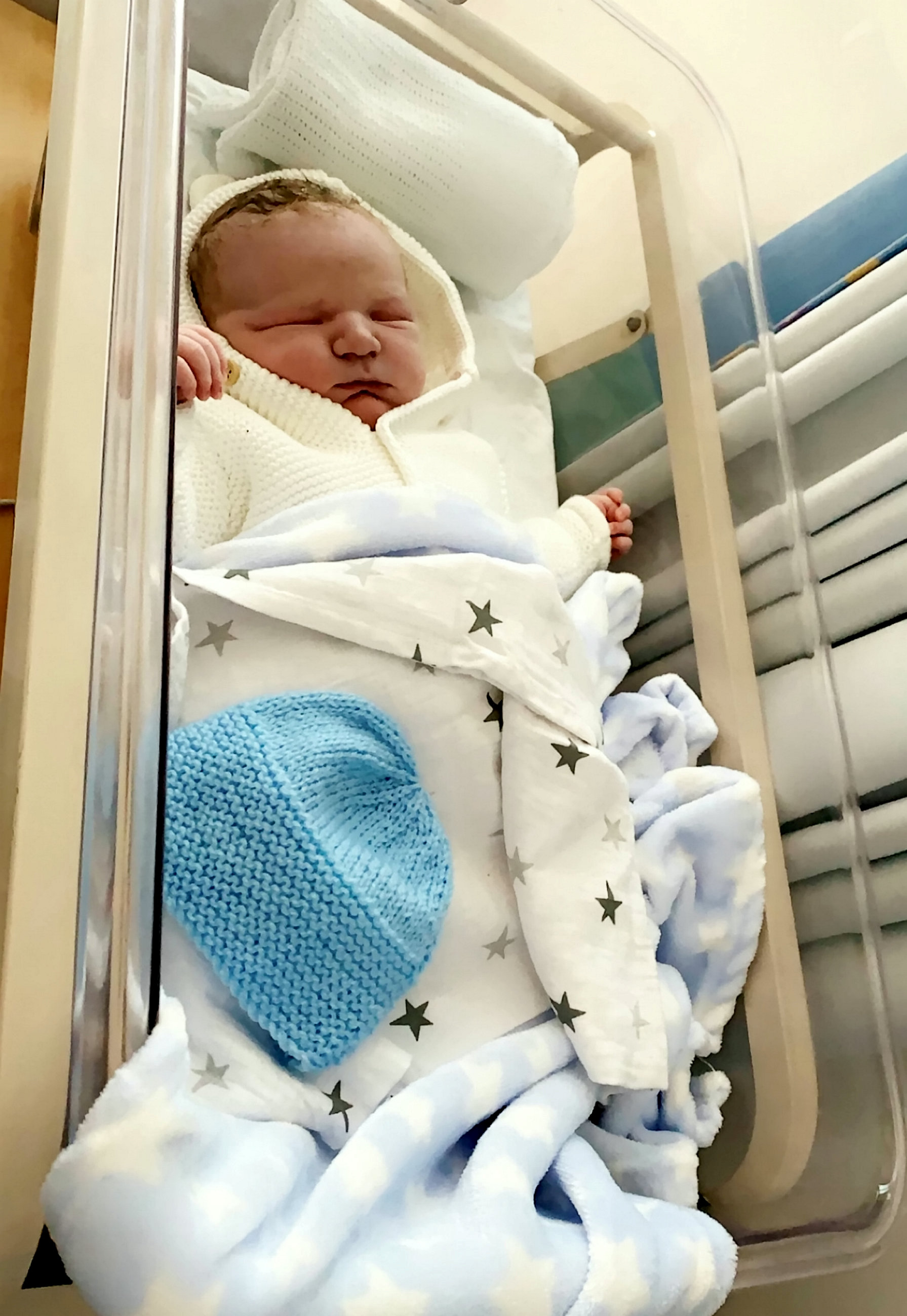 "When he was born we had to ask to double check the weight because it was 5,000 grams and we didn't know how much that was.

"By the time they'd converted it even the midwives were shocked and checked it again on the chart they had.

"One of them said he is the biggest baby that has been on the scales. The midwives were laughing saying his umbilical cord was like a tow rope.

"He went completely off the growth charts where they put the estimated weight and length – I think he was about the size of a four month old baby. 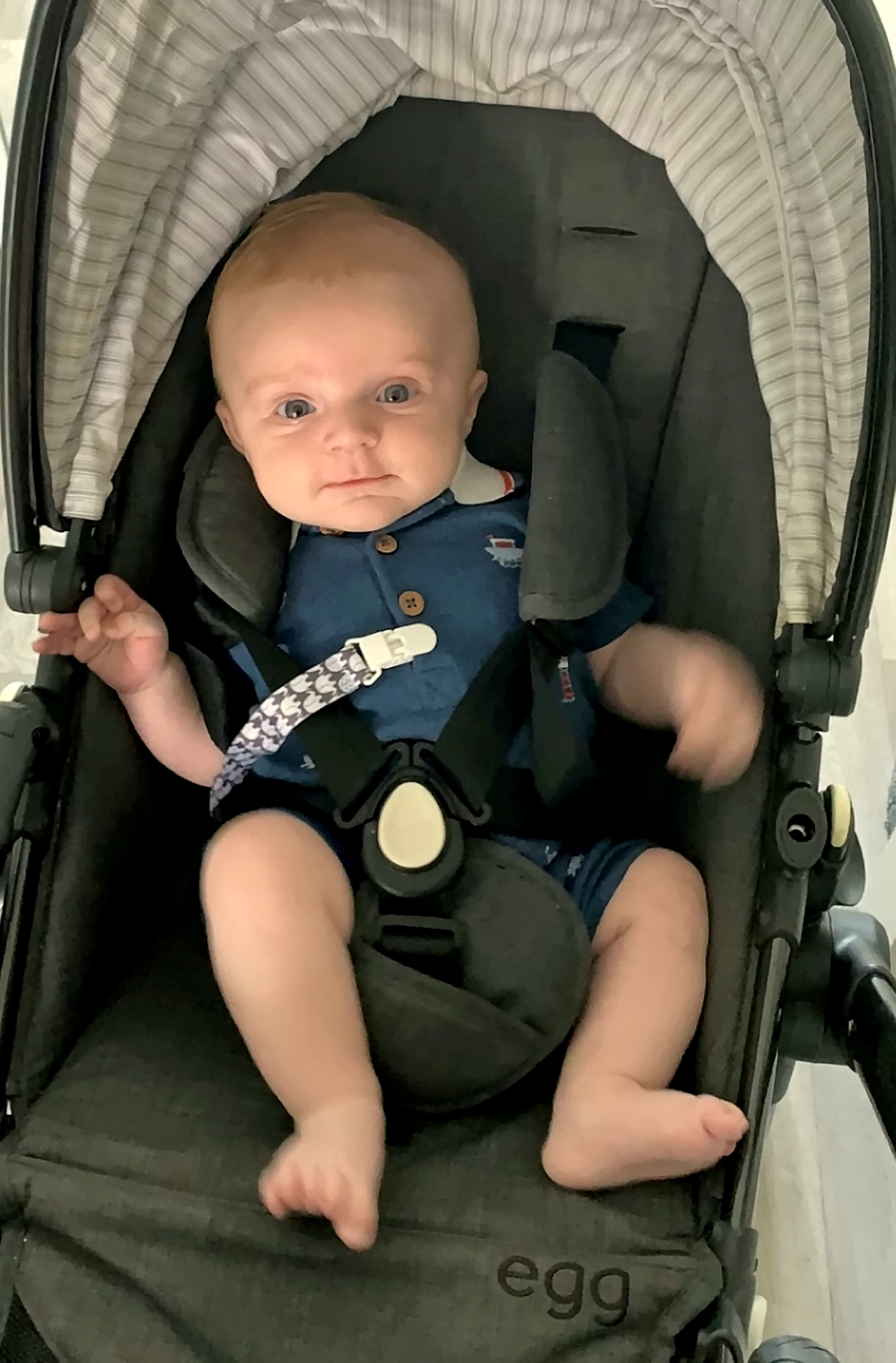 "He didn't fit in any of the newborn or 0-3 month baby clothes, he went straight into three to six months."

Ronny-Jay was originally due on April 9 and Jade was booked in to be induced on April 1 because of his size.

She added: "The hospital was too full and they couldn't induce me on that day so they told me to come back on the 2nd.

"Then nothing happened so they tried to induce me for a second time and at that point 20 women were in front of me. 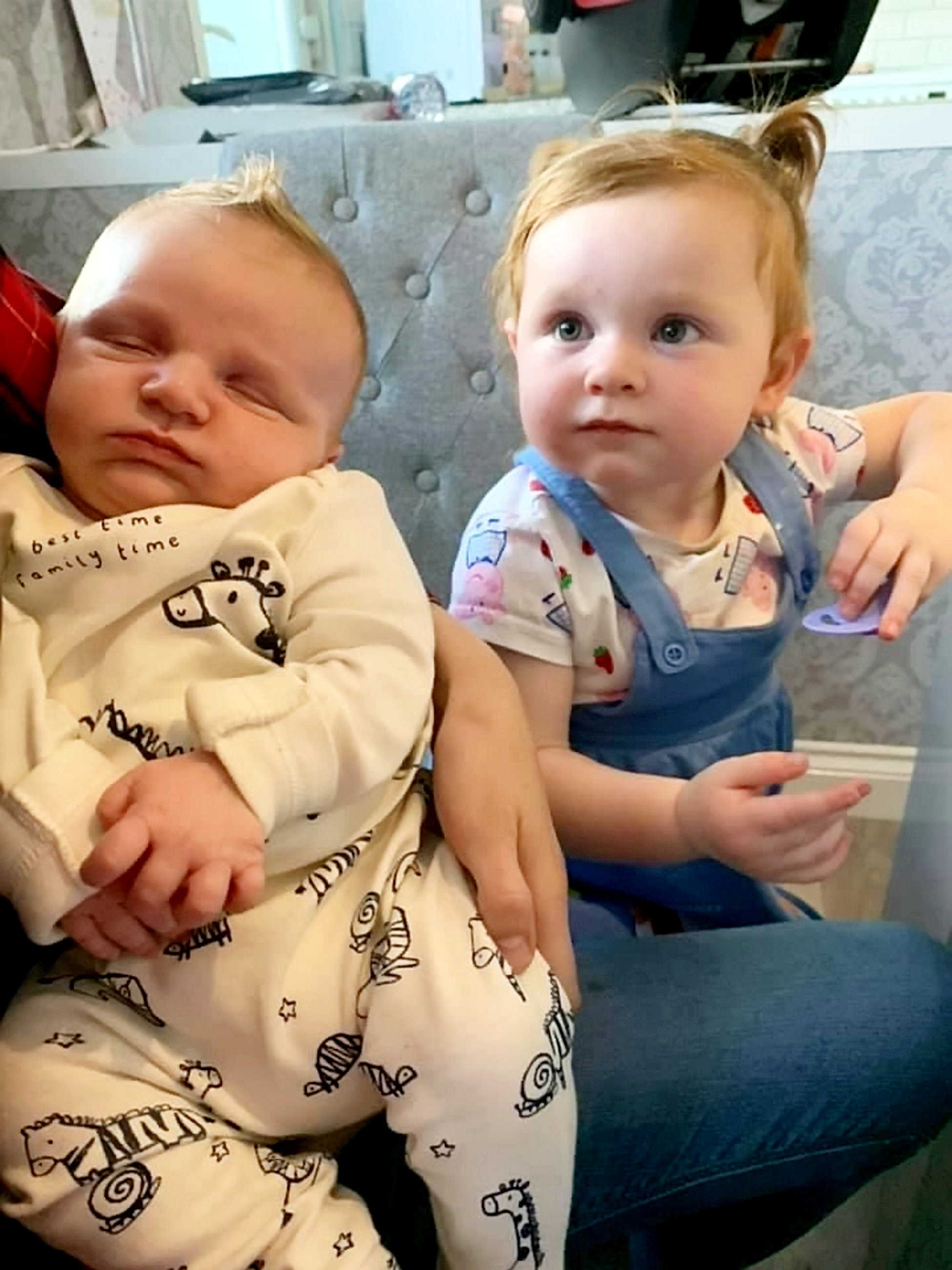 "But then my waters broke and I was rushed to delivery so he was born four days before his due date.

"I was in labour all together 16 hours and he actually got stuck as you can imagine due to his size.

"They had to increase the hormones in the drip but I wanted a C-section because I had been in labour so long and was tired.

"We were within minutes of going for one when the midwife said 'before you do that, you've been through a lot, would you try an epidural?'.

Next week, we'll be throwing our first ever Fabulous Girls Night In – and who else would we get to co-host the event than Vicky Pattison herself?!

Our beauty editor Tara Ledden will be chatting to the Queen of the Jungle all about her makeup regime and the products she just couldn't live without.

As they talk all things beauty, Tara and Vicky will also be trying out 2021's top products – as voted by YOU in this year's Fabulous Beauty Awards.

Better still, the event is completely FREE to attend – and as it's virtual, tuning in while you're mid-pamper and in your PJs is actively encouraged.

And if that wasn't enough, all attendants will be in with a chance of winning one of 10 beauty goodie bags worth an eye-watering £500.

So what are you waiting for? Sign up to this completely free girly pamper evening here.

"So I did that and he came about half an hour after they gave me the increased hormone, it was quite a relief.

"Then when they weighed him I realised what had been holding it all up.

"I had pethidine, gas and air and then the epidural, so I was awake and we went for a natural delivery.

"They estimated him at 10lbs 6oz so they knew he was going to be big but his dad weighed 10lbs 4oz and I had twins before which were also a good weight." 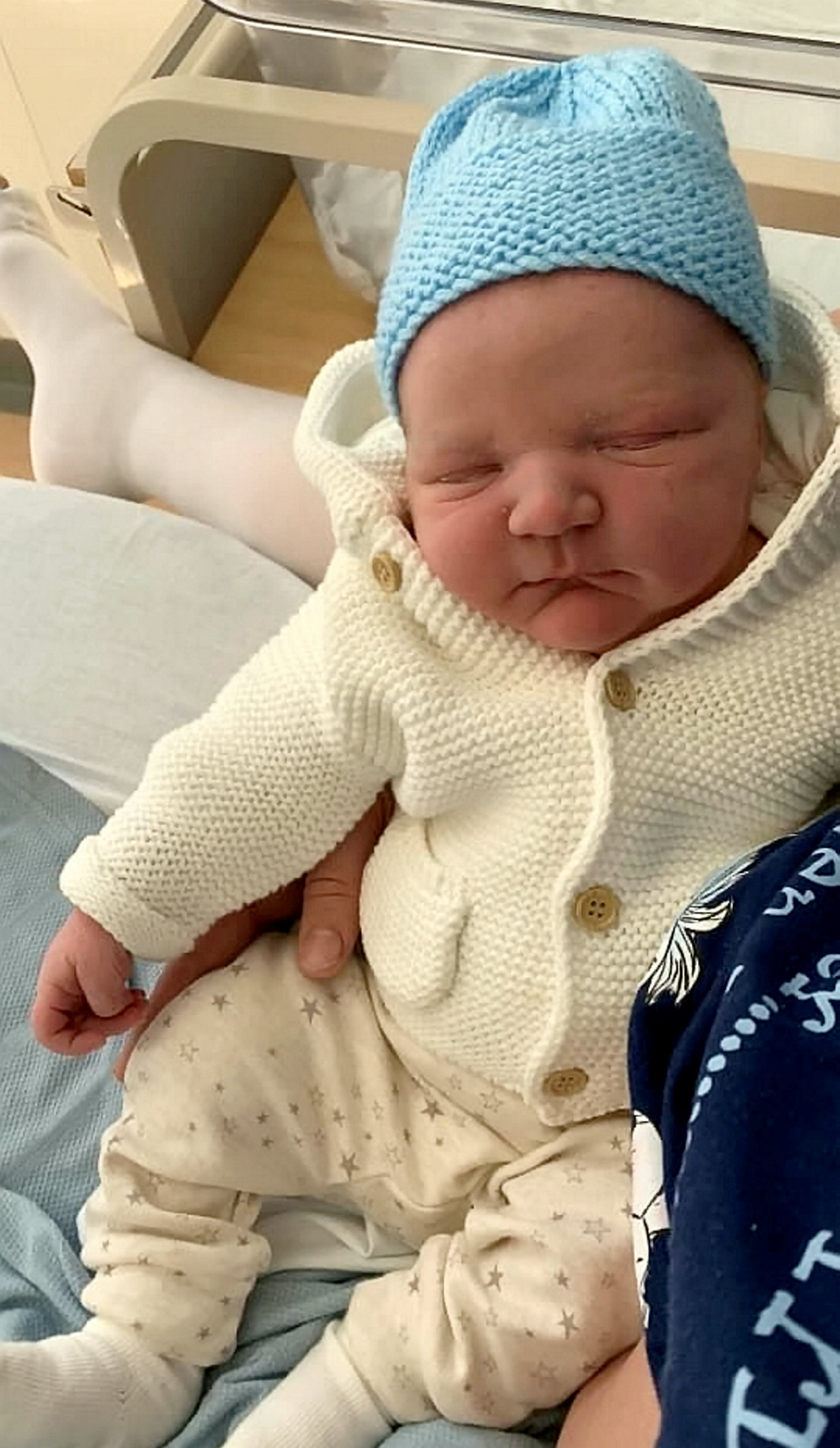 Jade added: "I was in that much pain towards the end of the pregnancy I kind of had to beg the consultant to be induced because I couldn't physically move or breathe.

"I've had big babies before but I could tell Ronny was different."

The mum, who lives with partner Scott Fewtrell, 29, a labourer, said Ronny would probably be their final child.

She added: "By the looks of it, they keep getting bigger and four is enough for anyone.

"I've done my fair share for the population and if they get any bigger then you are looking at a stone baby.

"He's doing really well now, I haven't been able to weigh him recently because it's tricky getting a space in the clinics.

"Now people can see him though and a lot of them say he's big and really heavy baby.

"But he is so chilled out, so happy, very content and I get good sleep with him.

"Milk formula-wise I had to put him straight onto the hungry baby formula because he was constantly hungry and wasn't satisfied enough.

"I did breast feed at the beginning but I wasn't able to produce as much as he was demanding.

"Then we combined and I could only breast feed for three weeks, it was just too much strain.

"He wanted to feed constantly so the midwives did recommend I switch entirely to formula feed because I just couldn't produce what he needed."

Scott was allowed to visit in certain hours, then once her waters broke he could stay by her side for the birth.

Jade said: "He was very shocked and taken back by the whole thing, although we expected a big baby but neither of us expected this.

"I was quite shocked to learn he could be one of Britain's biggest babies but the midwife did say he was the biggest ever on her scales.

"He's absolutely fine now and gets on great with his siblings, they dote on him.

"I can't thank the midwives enough for their continued support and work with me and the baby through my traumatic labour."

In other real life news, we told you about the sex addict who has now been "sober" ten years.

We also revealed the women whose real boobs are often mistaken for fake ones.

And a woman is a mum-of-three at 19 after falling pregnant for the first time at 14.