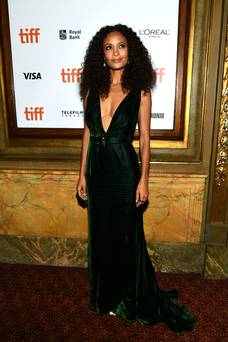 For a few years there, velvet fell out of favour with fashion folk, reappearing during winter as a tired festive cliche. Perhaps it seemed too retro-70s, or maybe we all had a little too much of the crushed-velvet that reigned during the 90s – it came across as old-fashioned while fashion was looking to the minimalist future.

But now, after years left out in the cold, the plush fabric has found new relevance. Maximalism has been firmly embraced, and velvet is enjoying a renaissance in the last few seasons. No crushed velvet here, thank you, only luxurious finishes, and preferably for evening.

Velvet is back on the agenda for partywear, as you’ve probably noticed in the shops over the past couple of months. While velvet gowns are always popular on the red carpet, we’re starting to see more accessible pieces for mere mortals to flaunt on a night out, from velvet suiting to pleated midi skirts to the sumptuous party dress.

Balenciaga’s deep pink mini was a standout on the catwalks, with its high neck, long sleeves and draping across the body to define the figure. Saint Laurent contrasted a short hemline with flowing fluted sleeves and knee boots, while Gucci offered up a sweeping gown in festive ruby red. At Prabal Gurung, velvet gowns came in gleaming gold and blue with cape detailing, drawstring ties and asymmetric hems, while Oscar de la Renta favoured sultry black with intricate embroidery. Patterns were sparse, and best avoided – instead, experiment with draping, a daring side slit or a vibrant hue, such as & Other Stories’ ochre mini.

During the press tour for her hit film A Star is Born, Lady Gaga took a break from her signature outré style to deliver some Old Hollywood glamour in a one-shouldered Ralph & Russo design, finished off with pointed courts and a sleek updo. The look was still dramatic, but quietly so, and one we’d like to be wearing this New Year’s Eve.

The velvet dress is fuss-free and, in the right cut, very flattering. In a poorly-designed dress, velvet can appear bulky, heavy or shapeless, so opt for a figure-skimming (yet not hugging) silhouette, like Thandie Newton in belted Oscar de la Renta.

A wrap style or one with draped detailing along the side, such as Warehouse’s glittering dress or Monsoon’s green number, will help to subdue a tummy, and the long sleeves add an elegant polish. When accessorising, we advocate a no-holds-barred approach for bidding adieu to 2018: shoulder-duster earrings and jewel-embellished clutch bags are just the ticket for a sparkly New Year’s party.

Lean into the 70s mood and style your dress with disco platforms for full Studio 54 glamour, and try a pair of pearly loveheart earrings for an optimistic start to the new year. If you prefer something a little less flashy, take your cue from Erdem’s combination of decadent velvet gown and heritage checked coat for a touch of regal allure.

In the midst of sale season, some of these prices may have changed since time of print, but there will be plenty of velvet pieces on the rails to choose from. And if you’re feeling the pinch post-Christmas, you may even be able to shop in your own wardrobe – while velvet has made a comeback, it’s not been a complete overhaul, so you might find ‘that old thing’ is ready for an outing once more.