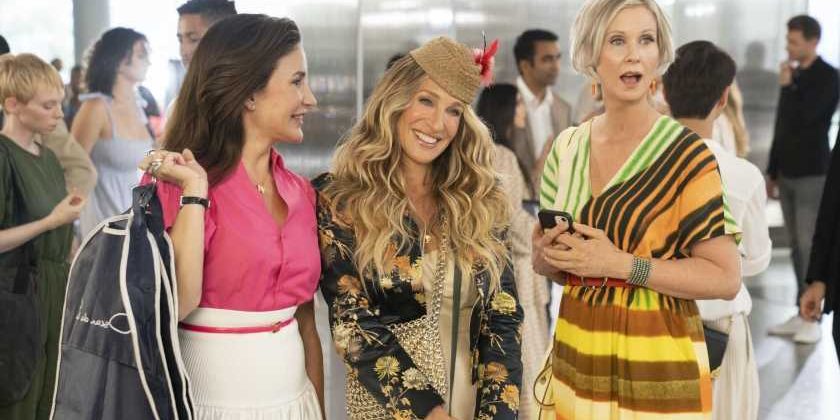 And Just Like That’s costume designers tell Naomi May about tricking the paparazzi, pandemic styling and picking out Carrie Bradshaw’s iconic wardrobe once again.

In a characteristically warm March, in a very un-Covid restricted Palm Beach, costume designer Molly Rogers and her co-designer Danny Santiago began shopping for what was about to become one of the cultural juggernauts of 2021: the Sex And The City reboot, And Just Like That.

“The producers were smart enough to realise that Palm Beach County and outlet malls in Florida would be a great place to hit,” Rogers explains over Zoom from her office in New York, as she sips a Vietnamese coffee. “It’s a totally different vibe than here in New York. And we were starting the series in summer, so it was good to start looking around in Florida for tropical clothes.”

Rogers found out she’d got the job just months before when she received a call while on holiday in Miami. “John Melfi [Sex And The City’s producer] called me and told me it was happening,” she says. “He told me there would be 10 episodes and he said “What do you think?” Pat had called me a week before to say you’re really the only person who should do it; she said “I’m passing the baton to you.”

Pat, of course, refers to Patricia Field, the legendary costume designer whom Rogers first encountered in 1984 and who is responsible for the fashion in the Sex And The City TV series and is revered throughout the industry. Rogers cut her teeth working for Field, who has now turned her attentions to Emily In Paris.

“Nobody had to twist my arm,” Rogers explains in a soft Southern drawl. “I wanted to be a part of this reunion. I really wanted to see everyone again, and there was no other person that would’ve made a better partner than Danny, who worked on both of the movies.”

After analysing the script for And Just Like That, Rogers and Santiago began creating moodboards for each character and what they’d be wearing 13 years on from the last time viewers saw them in the derided second film.

“Once we saw the girls, and met the new characters, and we got to see what they were thinking and feeling, we just had so much fun putting the looks together,” Santiago explains, before Rogers adds: “Carrie’s the statement maker, Charlotte’s the polished romantic and Miranda’s the relaxed power dresser.”

The show’s fashions are an amalgam of the fashion exposition for which the show is beloved and also an entirely appropriate evolution of a trio of women’s styles that are the same as they always were, simply older. Perhaps unsurprisingly, the misogynistic discourse surrounding the “youthful” styling of the stars who, much like the characters they depict, are in their early to mid-50s hasn’t gone unnoticed by Rogers.

“I’m not in the fitting room with Danny looking at Mr. Big thinking, ‘Oh, wow. We need to put some long sleeves on him because he’s older now.’,” she explains. “I don’t look at numbers when I get dressed, or when we dress the stars. That’s something Pat left us with is that when you put a piece of clothing on, it should make you feel confident as a woman. That’s what’s important.”

In the first two episodes alone, which launched to rapturous applause from devoted fans of the series, there are nods to the pandemic during which the series was filmed, including one memorable scene which features Carrie wearing a pair of custom Gucci diamante opera-style gloves to push an elevator button.

The character’s styles might not have changed much over the years, but when the show first started filming earlier in the year, paparazzi shots were leaked, a problem which wasn’t introduced to the crew and cast when the original show first began filming in 1998. Eagled-eyed fans began poring over each photograph, dissecting what each sartorial decision could indicate about the show’s script.

“It was bittersweet. It was great to have that much exposure, but it was also over exposure; could we not have anything sacred?” Santiago muses.

Rogers adds: “So many things got shot that we would have loved for people to have seen on the show rather than seeing it as someone’s coming out of their trailer because the outfit’s not complete, you don’t know what the scene is. But we threw a couple of curveballs every once in a while, to maybe try to throw people off the scent of the plotline. And I think, you know, it was pretty successful.” She smirks in a way that suggests that viewers have no idea of what’s about to occur in the show’s remaining octet of episodes.

Sex And The City And Just Like That: Carrie Bradshaw wearing custom Gucci gloves

Despite the obstacles posed by the pandemic – Rogers’ favourite New York discount clothing store Century 21 has shuttered its doors, which she bemoans – the style in the show is as delectable as it’s always been. Whether it’s the periwinkle blue Vivienne Westwood cardigan Carrie wears to sip cosmopolitans with Stanford and Miranda or new character Lisa Todd Wexley’s Issey Miyake jumpsuit and oversized jewellery from Monies, Rianna + Nina and Ana Srdic, Rogers and Santiago were meticulous in weaving modernity and practicality into the wardrobes of some of the most established in the fictional fashion world.

Including, of course, Carrie’s Manolo Blahnik Hangisi pumps, which she famously debuted at her wedding to Big in the first film. “Pat always said ‘There’s nobody that moves in clothes like Sarah Jessica,’” Rogers says. “The way she goes up and down stairs and heels, it’s the dancer in her. It’s beautiful to watch.”

The show’s wardrobe, similarly to the original series, features a lot of vintage, which is something that’s close to Santiago’s chest. He has an archive of vintage pieces, which live in Miami. In the opening scene of the series, Bradshaw sets the sartorial bar at a vertiginous height by weaving a vintage Claude Montana linen jumpsuit into her ensemble with a vintage mixed metal chain bag.

“That’s something that Pat’s done right since the beginning, I’m a huge lover of vintage, so it was very natural to incorporate it,” Santiago adds, but he is clear: “It’s very Carrie to wear something that you just love. Carrie dresses for herself; she loves fashion, she loves design, she loves things, and not necessarily because it’s a label or that it’s of a certain time or place. It’s just something that she’s drawn to.”

Despite the absence of one well-missed character (Kim Cattrall didn’t reprise her role as PR supremo Samantha Jones), was the work of costume designing for And Just Like That better this time around?

“We had a blast. It was the most wild, happy ride and I really had a great time,” Rogers concedes as she logs off Zoom to return to her sequin-strewn, fashion-filled office once again.

And Just Like That is available to watch now on Sky Comedy and NOW TV.