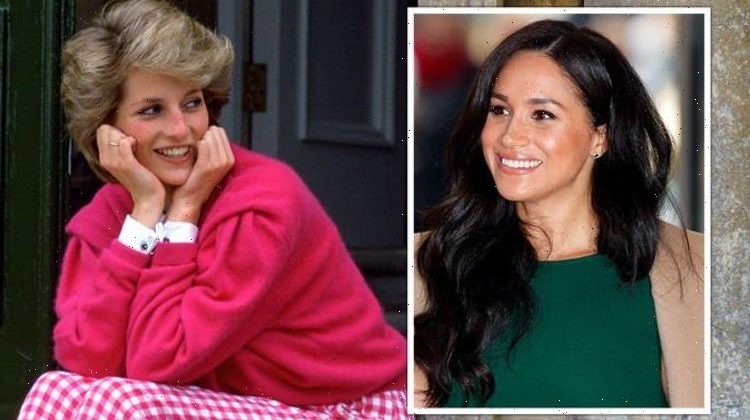 Harry and Meghan the 'influencers of the 21st century' says expert

Meghan Markle and Prince Harry have appeared on the front cover of TIME Magazine as part of the top 100 most influential people issue. For the cover, Meghan donned a crisp shirt and high-waisted trousers and was dressed top-to-toe in white. Prince Harry wore an all-black outfit and was pictured sitting behind her.

Pari Dukovic took the pictures of the Duke and Duchess, and Meghan was styled by sisters Nina and Clare Hallworth.

Her choice of jewellery for the TIME cover really stood out as it paid special tribute to her late mother-in-law, Princess Diana.

Meghan’s engagement ring alone pays homage to Diana, as the central diamond from Botswana is flanked by two diamonds from the late Princess’ collection.

But Meghan also opted to wear the gold Cartier Tank Francaise watch which once belonged to Princess Diana.

Founder of Prestige Pawnbrokers, James Constantinou, told the Daily Star: “Diana’s Cartier small Tank Francaise in 18-carat yellow gold, on matching bracelet, is a classic and timeless watch, as well as a functional piece of jewellery.

“Diana also owned a rounder Tank Louis, but stopped wearing it in the early 80s.”

The watch was thought to be a gift to Diana from her father, Earl Spencer, on her 21st birthday.

Diana stipulated in her will that she wished for her jewellery to be divided between her two sons when she died so that their wives could use it.

Meghan has been seen wearing several items from Diana’s collection over the years, including pairs of her earrings.

She also wore Diana’s aquamarine ring for her wedding to Prince Harry in 2018.

Meghan also used the TIME cover to make a bold statement with her style for the shoot, and her outfit held many symbolic meanings.

On several occasions, women wearing white outfits have been seen as symbolic of women’s rights and the struggle for gender equality.

US Vice-President Kamala Harris opted to wear white when she was elected as the US’ first female VP last year.

The accessories Meghan is wearing can also be seen to hold special symbolism.

Meghan is thought to be wearing the “Duet” pinky ring from Shiffon, which she wore on her left hand alongside her engagement ring.

The ring is priced at $525, with the brand stating the ring “represents one woman supporting another through a ‘pinky promise.'”

Women’s rights issues are hugely important to Meghan, with her 40×40 initiative earlier this year being a key example of her philanthropy in this area.

For her 40th birthday, Meghan encouraged people to give 40 minutes of their time to help empower women to return to the workplace.