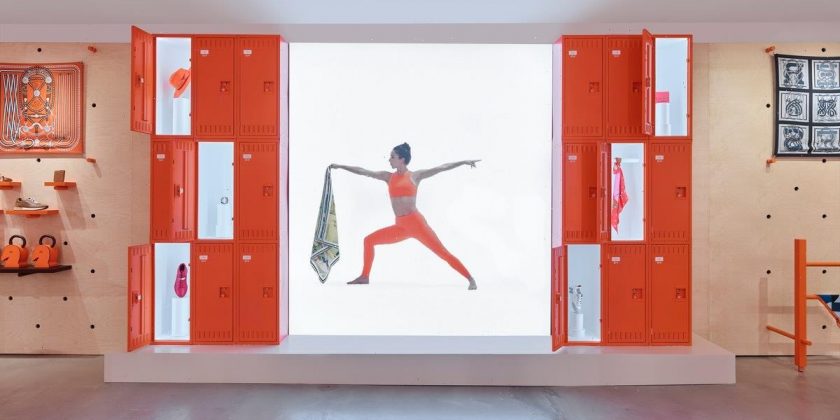 We paid a visit to the French maison’s playful new pop-up, where leather goods and silk scarves stand in for kettlebells and yoga straps. On Wednesday, November 3, I stepped into a brightly lit exercise studio with orange walls, artful archways, and shelves filled with fashionable sneakers. But this wasn’t any old barre class—this was #HermèsFit, a pop-up shop in Brooklyn’s Williamsburg neighborhood that mixes the worlds of fitness with luxury goods. If that combination seems like a strange one, somehow, the French house managed to put the two together in an intriguing manner—offering workout classes inside the two-story space that incorporate Hermès wares. From November 4 to 7, guests can sign up to participate in sessions whose names run the gamut of fabulous absurdity: “Kickboxing With Bracelets” is one option, while “Carre Yoga” is another—a nod to their iconic scarves.

I scanned the day’s offerings, searching for the most out-there-sounding class options, and settled upon something called “Mirror Mirror With Small Leather Goods,” and a 30-minute “Voguing With Hats” session. I had no idea what I was getting into, nor was I sure what any of it meant. While I am generally uncoordinated, I am nothing if not curious.

I trooped upstairs, where the classes took place; Hermès associates decked out in all-orange outfits (with orange masks to match!) were surrounded by displays of Hermès lipsticks and silk scarves hung like paintings. I was handed a grey leather wallet with the brand’s signature gold “H” buckle and ushered into the class, where a cheerful aerobics instructor was leaping and jumping in circles, holding his own wallet with both hands all the while.

Inside the Hermès Fit space in Brooklyn

The movements, which were part-dance-part-light-cardio, were, by all accounts, simple. But just five minutes in, I was already drenched in sweat, trying to keep up with instructions while clutching my wallet for dear life. Luckily, the entire class was caught on camera, so now, Hermès has plenty of photographs of me out of step with the other participants, grimacing and flailing around. Although I’m sure I looked foolish, it felt good to stretch my body out after a long morning slumped over my laptop—plus, my fellow members of the press in attendance were good-natured and positive, even emitting a “woo!” here and there. At the end of the class, an Hermès associate collected our wallets onto a bright orange tray. I reluctantly handed mine back to him, now significantly more clammy than it was when I received it.

Voguing With Hats was up next, and entailed exactly what the name suggested. Four of us chose hats to serve as accessories to a series of Fosse-esque dance moves (I opted for a navy blue felt bucket). Saying that I had a hard time executing the moves is an understatement—rather than looking like a glamorous ballroom star, I resembled an 80-year-old woman doing a stiff round of Saturday morning Tai Chi. The instructor, a kind man named Josh, took a liking to (or pity on?) me, and made eye contact throughout the entire class, as though he were silently pleading with me to just do one of the moves correctly.

Despite my own physical shortcomings, I left my workout session feeling hopeful, positive and full of endorphins. Even if you don’t attend an aerobics session, the space is worth a visit, if only to get a glimpse of the cheerful interior design (don’t miss the rock climbing wall, and punching bags hung all throughout the downstairs area, plus kettlebell weights modeled to look like horse head-shaped boxes). If you do muster up the bravery to let loose in a class, it’s an undeniably fun way to get off your couch and get moving. And unlike a standard fitness studio, you might get to do bicep curls with a luxurious leather wallet.