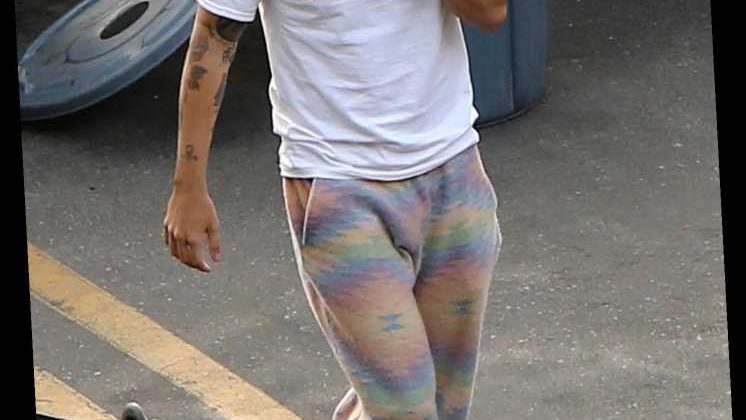 Less than a month after he was spotted out and about with a new ‘do reminiscent of the choppy, short-on-the-sides, longer-on-top haircut he rocked in the 2017 war film Dunkirk, the 26-year-old singer was photographed sporting a dapper slicked-back look on the set of his upcoming thriller Don't Worry Darling in Los Angeles on Monday.

Styles’ new gelled look is already sending fans into a frenzy on social media, with one Twitter user calling the singer a “shapeshifter” because of his ability to pull off just about anything, while another joked that “the entire world revolves around Harry and his hair.”

Seemingly in between takes of the Olivia Wilde-directed film (in which Styles will star opposite Florence Pugh and Chris Pine), the “Watermelon Sugar” singer looked incredibly cool in patterned sweatpants and a white T-shirt with the words “Don’t Trip” on the front and “Vote” on the back. Styles accessorized with comfy New Balance sneakers and a white N95 mask as he walked back to his trailer on set. "HIS HAIR AND THE VOTE SHIRT??!! HARRY STYLES ITS A YES FROM ME," one Twitter user wrote. Someone else added, "How can you look so good while wearing a mask?"

In October, the singer was seen in L.A. with noticeably shorter hair after sporting long curly locks (and a much-talked-about mustache) during quarantine amid the coronavirus pandemic.

Several people posted photos with Styles on social media, and his fans were quick to compare the new 'do to his Dunkirk era haircut.

"all the dunkirk harry stans are freaking out right now i just know it," one person tweeted alongside a recent photo of Styles and two throwback pics of him in the Oscar-winning film and at the red carpet premiere in France.

"SO WE WENT FROM FRAT BOY HARRY TO DUNKIRK HARRY IN LIKE A WEEK- OKAY," a Twitter user captioned a fan selfie with Styles, who was seen wearing a graphic tee (which is the same style worn by Jennifer Aniston on an episode of Friends) and '70s-inspired plaid pants while throwing up a peace sign in the background.

"this is dunkirk harry but UPGRADED bc of the curls in top… im living," another social media user replied.

The fan reaction to Styles' short hair seems mostly positive, but the musician caused some division among fans when he was photographed with a scruffy mustache earlier this year during a visit to Modena, Italy.

The picture quickly went viral and, unsurprisingly, the Internet had some thoughts about his new look.

“Harry i swear imma get u a razor,” one social media user wrote.