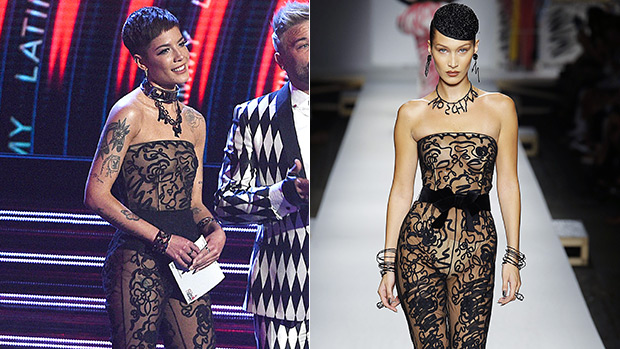 Bella Hadid slayed on the runway when she was the first celeb to sport Moschino’s sheer jumpsuit, and now, Halsey has worn the look too! Which star rocked it better?

Halsey, 24, and runway model Bella Hadid, 22, showed that they are the best of pals at the 2018 Victoria’s Secret Fashion Show, but they’ve also got a little friendly fashion competition underway! The two have both sported the same exact jumpsuit, from Moschino’s Spring-Summer ’19 collection. While Bella was the one to wear it first, Halsey looked drop dead gorgeous when she slipped into the number on Nov. 15 ! It’s honestly hard to decide who wore this look better, but take a look at the pictures and decide for yourself!

Bella put in work (literally) when she wore the sheer Moschino ensemble. The model was tapped to sport the jumpsuit on the runway, as the world got a first look at the SS 2019 collection from the famed designer. As she strut her stuff on the catwalk, Bella looked incredible in the black one-piece, which she cinched at the waist with a bow belt. Unlike Halsey, who sported her sleek haircut, Bella rocked a glittering hat with her outfit.

Halsey wore the high-fashion outfit out in real life, so she dressed it down a tad more than Bella did. The “Bad at Love” singer wore the chic ensemble for her appearance at the 2018 Latin GRAMMY Awards in Las Vegas, and looked stunning! Halsey’s signature tattoos were on full-display in the revealing outfit, and she wore a number of eye-catching accessories as well. Halsey rocked an oversized statement necklace to offset her strapless look, and elevated it with a pair of sky-high stilettos.

One thing’s for sure: both Halsey and Bella were in tip-top shape when they attended the 2018 Victoria’s Secret Fashion Show. Halsey spoke on the experience of getting to sing on-stage alongside the biggest models in the world. “I gotta be honest,” she said. “Going into it I thought I would be kind of nervous because I kind of expected a tense and competitive environment, you know? Opposite. All the girls are so compassionate, and so supportive of each other. Everyone’s having fun all day, they’re not all serious. Everyone’s laughing and joking around. They’re so happy to be there. You can just tell that they’re living their dream. And the energy is contagious.”