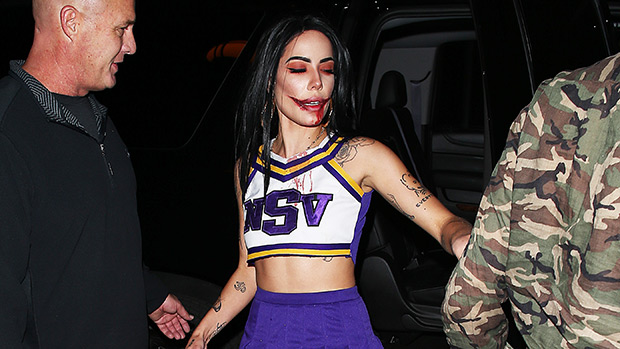 Halsey did Halloween right. Her portrayal of Jennifer from ‘Jennifer’s Body’ was unbelievably perfect! Watch as she creepily gets into character.

Well hello, Halsey! The “Without Me” singer celebrated Halloween in the best way this year, with a creepy tribute to the 2009 film, Jennifer’s body. Just like Megan Fox did in the movie, 24-year-old Halsey donned a sexy cheerleader outfit, but with bloody makeup dripping down her face, we can’t tell if this look was more sexy or scary! Halsey proved just how committed she was to her costume, with a video of herself acting the part. In a clip posted to her Instagram, Halsey can be seen creepily smiling at the camera, before quite literally setting fire to her tongue. While the video ends directly after, let’s hope Hals didn’t get burned too bad with this crazy stunt! “You’re lime green jello and you can’t even admit it to yourself,” Halsey captioned the post, quoting the famous line from the flick.

Don’t think for a second the blood-sucking ensemble was the only costume Halsey whipped out this year. Five days before, the songstress SLAYED in a Poison Ivy costume for her Gotham themed party. She called the outfit her favorite Halloween costume “of all time ever” — and we might have to agree! Hals looked incredibly sexy in her red wig, with vines running up her legs and head-to-toe green body paint. Plus, her bra top and thong were fashioned out of leaves. Once again, Halsey displayed her “go big or go home” Halloween mentality!

Of course, Halsey didn’t participate in a couples costume this year following her split with G-Eazy, but the rapper’s costume might have been an ode to his ex-flame. Just one day after Halsey dressed up as Poison Ivy at her Oct. 26 bash, G suited up as the iconic Batman villain, Two-Face. The breakup is still super fresh, so it’s possible these two planned these costumes together all along!

“You’re lime green jello and you can’t even admit it to yourself.”

We love how serious Halsey took Halloween this year! Somehow, she managed to perfectly embody Jennifer’s spooky character, and looked sexy while doing it!