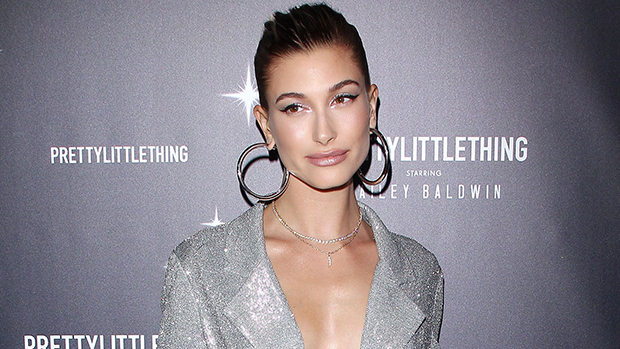 Hailey Baldwin stepped out in sequins for the launch of her new holiday collection with Pretty Little Thing! She went braless in a sexy, silver blazer and pants while on the red carpet solo! Where was JB for her big night?

Hailey Baldwin, 21, shined bright like a diamond at the launch of her Pretty Little Thing holiday collection at Catch in West Hollywood, CA on November 5! The model — who hit the red carpet solo and Justin Bieber-less — stunned in a silver-sequined blazer and pants set. She opted to go braless in the sultry blazer, showing her bare chest and ample cleavage! Check out her full look below!

Hailey stepped out for the launch with her hair in a slicked-back up do’ and oversized hoop earrings. Her glam certainly fit the night’s glittery holiday-esque theme, with Hailey wearing white, sparkling eye shadow and a light, frosted pink lip. She also matched her pointed stilettos to her silver suit. Hailey announced that she is the face of the UK-based clothing brand’s new Diamond holiday collection a week before it dropped on November 6.

Hailey helped curate a line of glittery, sequined pieces with the celebrity-obsessed brand. “Let Hailey Baldwin take you to party season where dripping in diamantes is the dress code and the party goes on all night long,” PrettyLittleThing writes on its website. The pieces in the collection, featuring two-piece sets, dress, skirts, pants and more, consist of heavy metal, crystal-embellished ensembles and “diamante-detailed party hardware.”

Hailey Baldwin attends the launch of her holiday collection with PrettyLittleThing at Catch in West Hollywood, California on Monday, November 5, 2018.

Hailey’s solo night out came on the same day a report claimed her fiance, Justin Bieber, 24, is unhappy, despite all of the blessings in his life. The singer is reportedly struggling with a “missing feeling of happiness” in his life, although he’s grateful for Hailey. This is something JB’s apparently struggled with in the past. The emotional report also came just a few weeks after Bieber’s ex, Selena Gomez, 26, suffered an alleged “emotional breakdown” and entered treatment for mental health. Gomez has also been suffering complications due to her lupus diagnosis, according to reports.

Nonetheless, Hailey and Bieber seem to be going strong still. The pair, who may have tied the knot in secret, became engaged on July 7. JB popped the question with an oval-cut diamond ring while they were on vacation in the Bahamas. The surprise engagement came after Justin and Hailey, who previously dated in 2015 and 2016, rekindled their romance in June 2018. The two have yet to confirm if they are married or not.