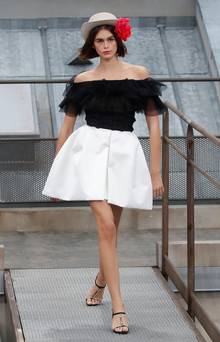 Fashion month drew to a close in Paris yesterday, and it went out with a bang. There were the typically striking collections from Miu Miu and Louis Vuitton in the evening, yet the most memorable moment came earlier in the day at the Chanel show, in which models paraded along Parisian rooftops in a dramatic recreation of the city skyline.

There were all of the French fashion house’s signatures – tweed suits, ballet pumps and accessories emblazoned with the interlocking-C logo – but there was also one interloper: a catwalk crasher, who has since been named as comedian Marie S’Infiltre. Dressed in a tweed skirt suit, she weaved her way around the chimneys and skylights in the finale walk, looking so comfortable amongst the other models that security guards struggled to identify her, until Gigi Hadid played bouncer and escorted her off the catwalk, while Chanel president Bruno Pavlosky laughed it off.

It wasn’t the only incident this month that had fashion fans buzzing – here, we take stock of the most talked-about moments from New York, London, Milan and Paris.

For her second blockbuster Savage X Fenty lingerie show, the popstar-turned-fashion mogul reinvented the runway extravaganza with a cast of all shapes, sizes, skin tones and abilities, fierce choreography from a vast team of dancers, and performances from Migos and Halsey, among others. Smartphones were banned, as the show was filmed exclusively for Amazon Prime, and Rihanna herself opened the spectacle, dancing atop a podium in a sheer black catsuit. With the Victoria’s Secret show cancelled this year and the brand facing pressure to offer something more modern than the same stale old teenage boy’s fantasy, Rihanna has offered up a worthy – and very fun – replacement.

Prabal Gurung hasn’t been shy about bringing politics to the catwalk, and for his 10th anniversary show in New York, he went beyond slogan T-shirts by enlisting Jose Antonio Vargas, the author of Dear America: Notes of an Undocumented Citizen, as a consultant. The designer, who is originally from Nepal, played with symbols of Americana from the rose to blue jeans, and sent every model out during the finale wearing pageant sashes that read, “Who Gets to Be an American?”, in a dig at President Trump’s immigration policy. In London, meanwhile, brands preferred an “escape” from the Brexit turmoil – with the notable exception of Wexford-born designer Richard Malone, who stepped out for his finale bow in a T-shirt reading “F*** Boris”.

Protests play out on and off the catwalk

With the climate crisis raging on, Extinction Rebellion targeted London Fashion Week in a series of protests, from a fake blood-soaked “die-in” outside the main British Fashion Council venue on day one to a funeral procession on the final day, attempting to draw attention to the industry’s poor environmental record. At Gucci, meanwhile, the showspace was set up like a clinical waiting room through which a group of 60 models, wearing beige and white shirts that looked a lot like straitjackets, passed on a travelator. Only one model, Ayesha Tan Jones, objected, writing the words “mental health is not fashion” on their hands and raising them high. Jones later said they were donating the catwalk fee to mental health charities, while Gucci confirmed the jackets will not be made available for sale, explaining that they had been included as “the most extreme version of a uniform dictated by society and those who control it”.

JLo reminds us who to thank for Google Images

When Jennifer Lopez appeared at the Grammys in February 2000 in a plunging green Versace gown, so many people turned to Google in search of photos that the tech company decided to expand from text to images, and Google Images was born. It was a viral moment in a pre-viral era, and in Versace’s latest collection, the designer collaborated with Google to create the most show-stopping moment in all of fashion month. She teased variations on the iconic dress with jungle-print minis, jackets and suits, until the end, when Donatella’s voice came over the sound system: “Okay Google, now show me the real jungle dress.” Cue JLo herself, striding out in an updated version of the very piece to wild applause, and immediately going viral once again.

Influencers fly into a frenzy over #NewBottega

The most ubiquitous piece on the front rows this season has been Bottega Veneta’s It bag, The Pouch. The oversized clutch is the must-have arm candy for any fashion insider, ideally paired with the brand’s square-toed sandals or quilted stilettos. Last year, Bottega Veneta tapped a largely unknown British designer, Daniel Lee, in a bid to rejuvenate the Italian label, and the sudden pervasiveness of these accessories had critics wondering if the brand had implemented a major marketing strategy, gifting the products to prominent stylists and editors. A Fashionista report suggested social media influencers wanted in on the act, too, but not being on the brand’s radar, some were even splashing out up to €2,400 of their own money to “fake it”.

Brands wise up to mature models

Of course, the majority of models on the catwalks were still in their teens and early 20s, but the shift that has been taking place over the past few seasons saw more brands casting models in their 40s and above. Two designers leading the charge were Irish: Antrim-born Nicola Glass, who brought a diverse range of models to Kate Spade, including Lyn Slater, Giannie Couji and Debi Mazar; and Simone Rocha, who continued her tradition of ageless casting with Irish actress Olwen Fouéré alongside Lesley Manville and supermodel Karen Elson. Seems like brands are finally copping on the idea that customers might like to see themselves in the models walking so they can see themselves in the product…