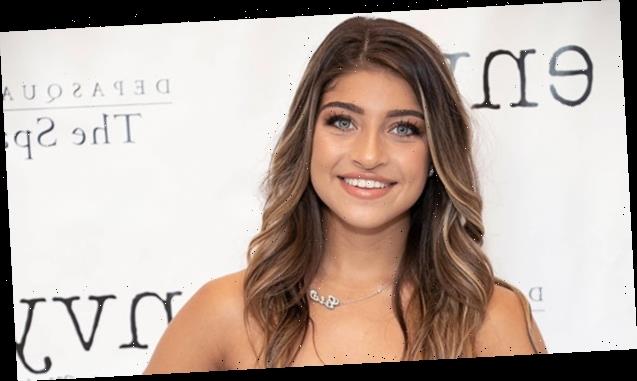 Gia Giudice looks stunning in a pair of new bikini photos! On March 25, the ‘RHONJ’ star, 20, modeled a black and white Balenciaga two-piece at the beach!

Gia Giudice is living it up in the Bahamas, where she’s vacationing with dad Joe Giudice, and sisters, Gabriella, 16, Milania, 15, and Audriana, 11. On Thursday, the Real Housewives of New Jersey star, who turned 20 in January, shared a pair of beach snaps to Instagram with caption: “Bahama Mama”. Gia, who was pictured sitting on a swing that dangled over white sand, rocked a black and white Balenciaga logo bikini.

Joe and Teresa Giudice‘s oldest daughter held a pair of sunglasses in one hand while she balanced on the swing. The sunny snaps also displayed Gia’s rib tattoo, on her right side. The reality star, who’s a college student at Rutgers University in New Jersey, shared a third photo to Instagram Stories that showed her sitting on another swing beach swing. She had her brown and blonde high-lighted hair pulled back in a bun and accessorized with circular sunnies and a black, sheer skirt.

“Absolutely beautiful breathtaking!!!”, Teresa wrote in the comments, adding, “I Lovvve U”. Gia’s aunt, Melissa Gorga also took to the comments to share, “So purttyyyyy,” with a red heart emoji. In a separate post on her feed, Gia uploaded a selfie with her dad and sisters, along with other scenic shots, while the family was “exploring” the Bahamas.

The Giudice family is enjoying the sand and sun in the Bahamas while Teresa is back in New Jersey, where she made a virtual appearance on Watch What Happens Live with Andy Cohen on March 24 — following the latest episode of RHONJ. While gushing over her new boyfriend, Luis Ruelas, who she called her soulmate, Teresa revealed that things are more than amicable between Luis and her ex-husband.

“Louie wanted to go to the Bahamas and meet [Joe] — which I thought was the most amazing thing ever,” she told Andy Cohen. “He said he just wanted to talk to him and let him know he’s not trying to take his place or anything. But he just wanted to meet him, ’cause I have daughters.” Teresa and Joe finalized their divorce in September after 20 years of marriage — something that was discussed on Wednesday’s all-new RHONJ.