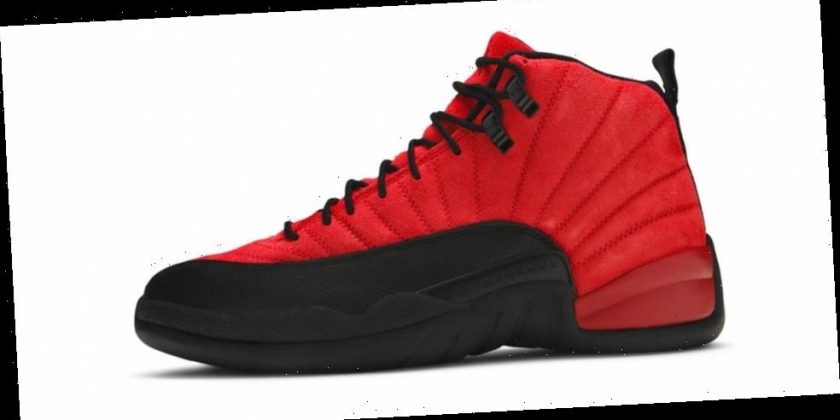 To celebrate the release of the Air Jordan 12 in a new “Reverse Flu Game” colorway, GOAT has created a list of the top pairs of Jordan’s worn by the prolific player during his career. Inspired by Michael Jordan’s performance while he suffered from flu-like symptoms during Game 5 of the 1997 NBA Finals, this new model with a “Reverse Flu Game” colorway will be sure to thrill any basketball fan. Before this new pair releases on December 26, learn about the key details that define each of the most memorable shoes worn during Jordan’s legacy. The new Air Jordan 12’s and other pairs worn in Jordan’s most important games are available now on GOAT’s website and app. 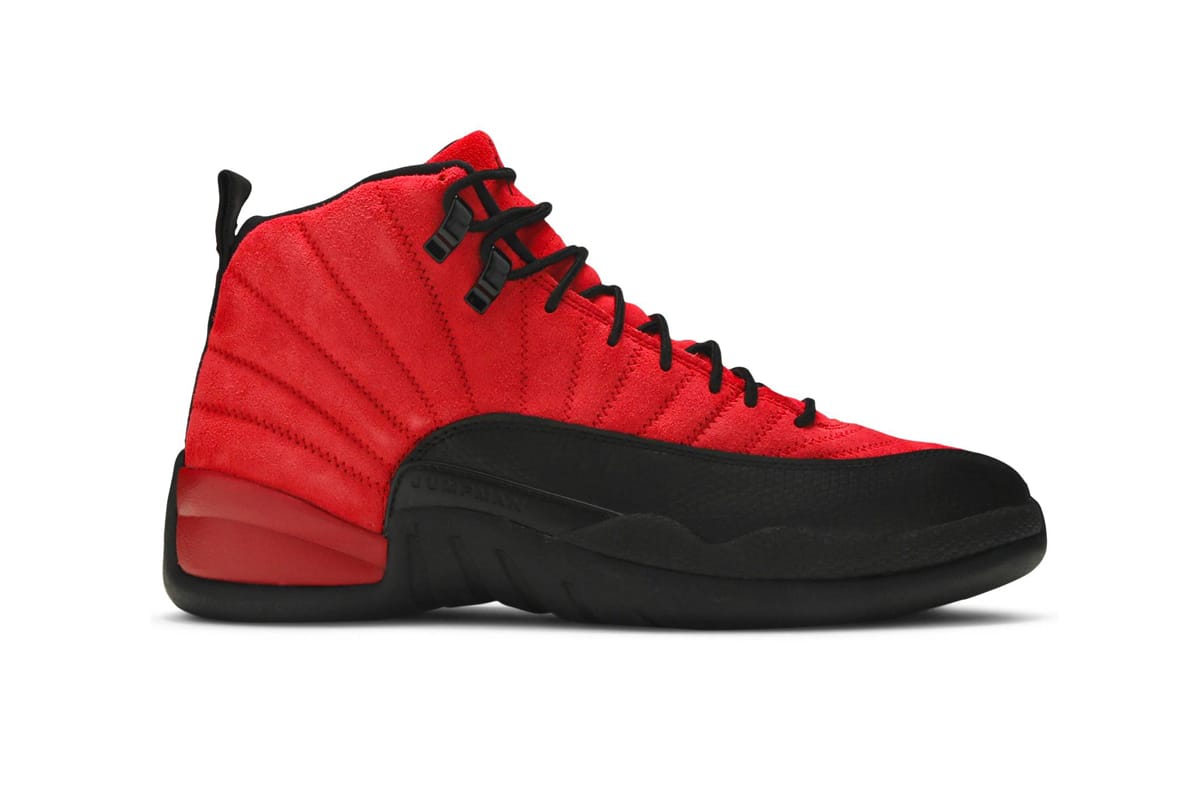 Release Date: December 26, 2020
Lowest Price: $272 USD
The new Air Jordan 12 in the “Reverse Flu Game” colorway was designed as a flip on the colorway that Jordan wore during Game 5 of the 1997 NBA Finals. With a two-tone color scheme that has a stitched suede upper in a bold Varsity Red, this sneaker is a great way to show off some team spirit for the Bulls. A contrasting black finish can also be found on the faux reptile overlay and foam midsole on the rest of this model. 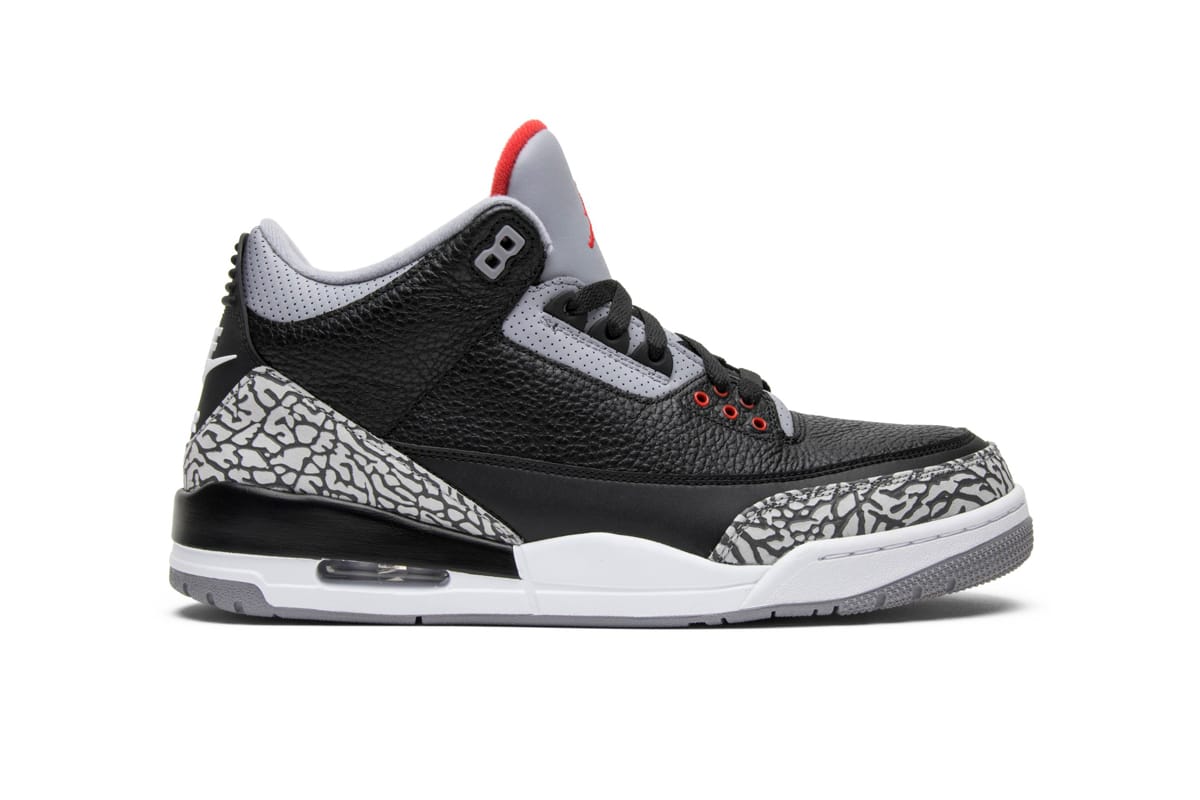 Release Date: February 2, 2018
Lowest Price: $350 USD
Born from a collaboration between Michael Jordan and Tinker Hatfield, the Air Jordan 3 is now one of the most essential Jordan models. Key details of Jordans originated with this shoe: it was the first time the elephant print was used on the shoe and the first time the “Jumpman” logo was used on the tongue with the classic “NIKE AIR” stamped on the heel. With black tumbled and smooth leather uppers, this Air Jordan in “Black Cement” is a timeless classic. 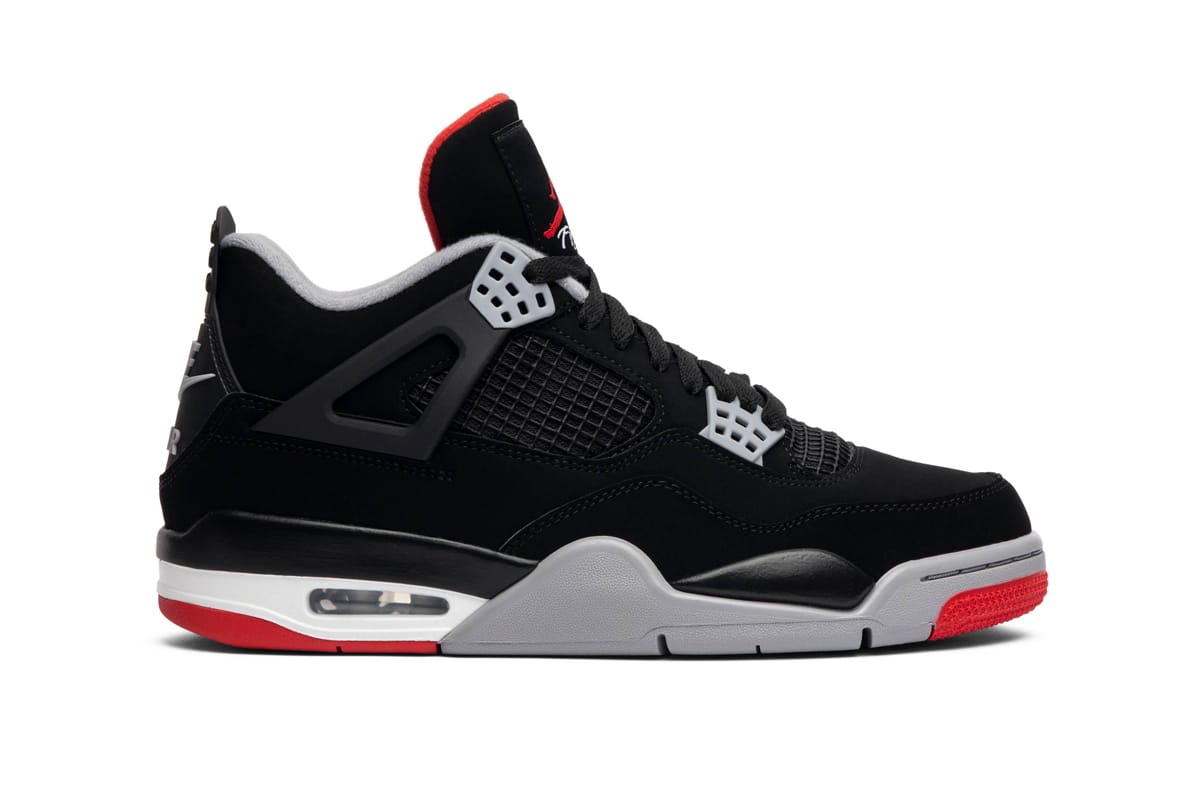 Release Date: May 4, 2019
Lowest Price: $302 USD
The 2019 edition of the Air Jordan 4 in the “Bred” colorway commemorates the 30th anniversary of the model’s classic silhouette. This black, grey and red shoe is the same colorway that Jordan wore when he sank ‘The Shot’ during the first round of the 1989 NBA playoffs. This updated model has an exterior designed very closely to the original with a black nubuck upper, visible Air Sole cushioning underfoot and Nike Air branding on the heel. 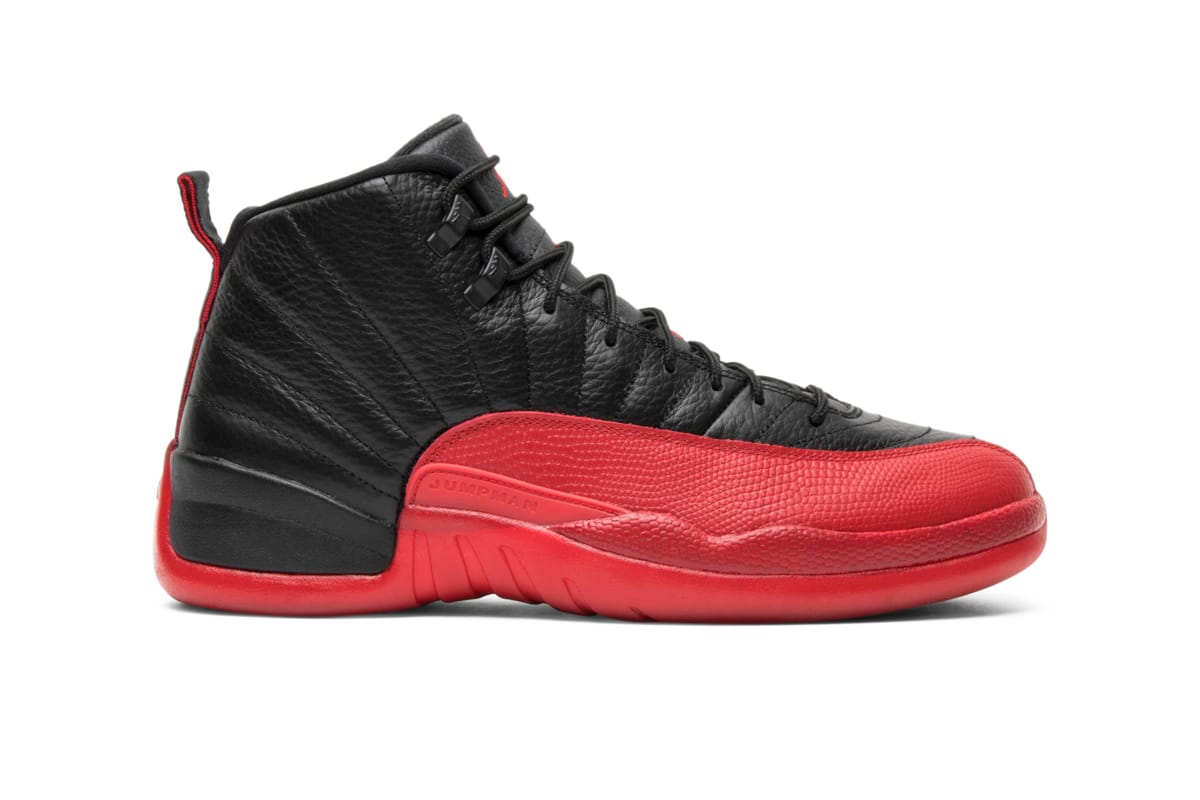 Release Date: May 28, 2016
Lowest Price: $280 USD
Released in 2016, the Air Jordan 12 Retro in the “Flu Game” colorway was the original model that celebrated Jordan’s legendary performance in Game 5 of the 1997 NBA Finals. Battling flu-like symptoms, Jordan still managed to lead the Bulls to a 3-2 series against the Utah Jazz. This shoe features a black tumbled leather upper and varsity red on the mudguard and outsole. 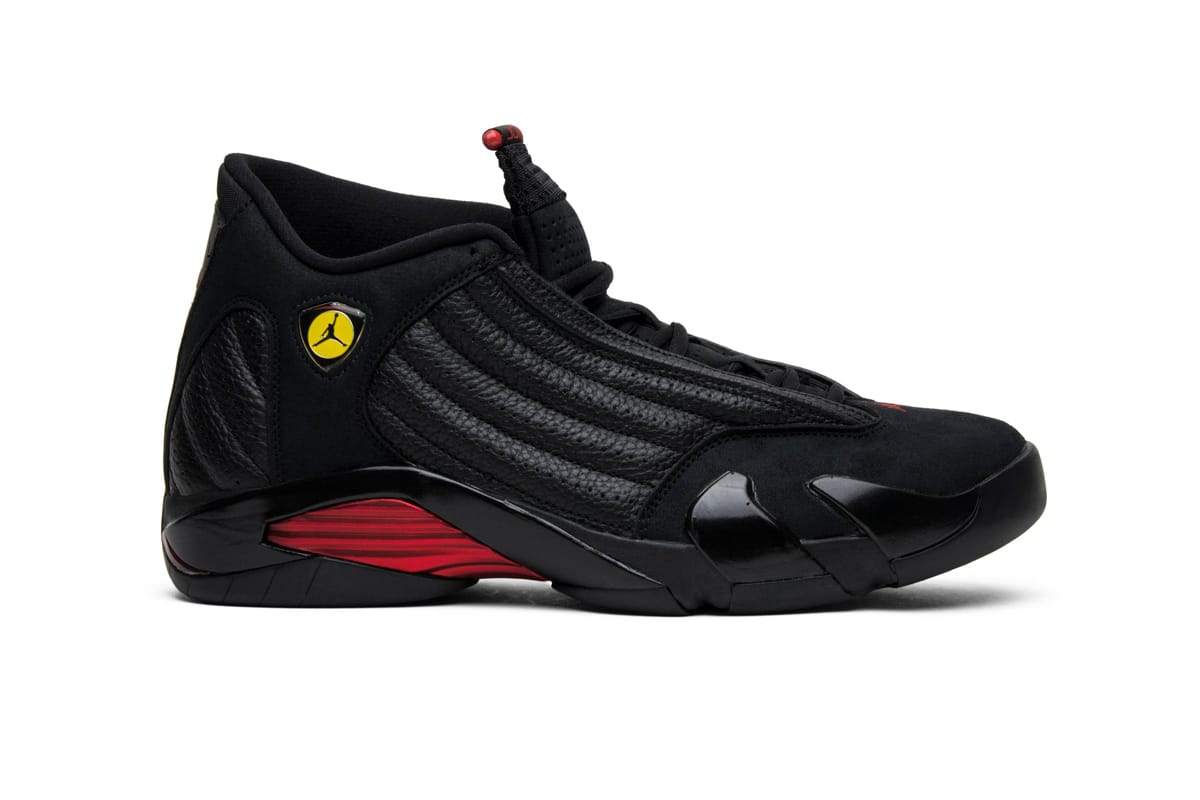 Release Date: June 14, 2018
Lowest Price: $160 USD
Fans of Michael Jordan will recognize this Air Jordan 14 model as the same shoe that he wore when he hit the winning jumper in Game 6 of the 1998 NBA Finals. This legendary sneaker was reissued in June 2018, but all of the model’s original elements remain for this “Last Shot” colorway. The Ferrari-style medallion on the midfoot helps this iconic silhouette stand out against the other models worn by Jordan. 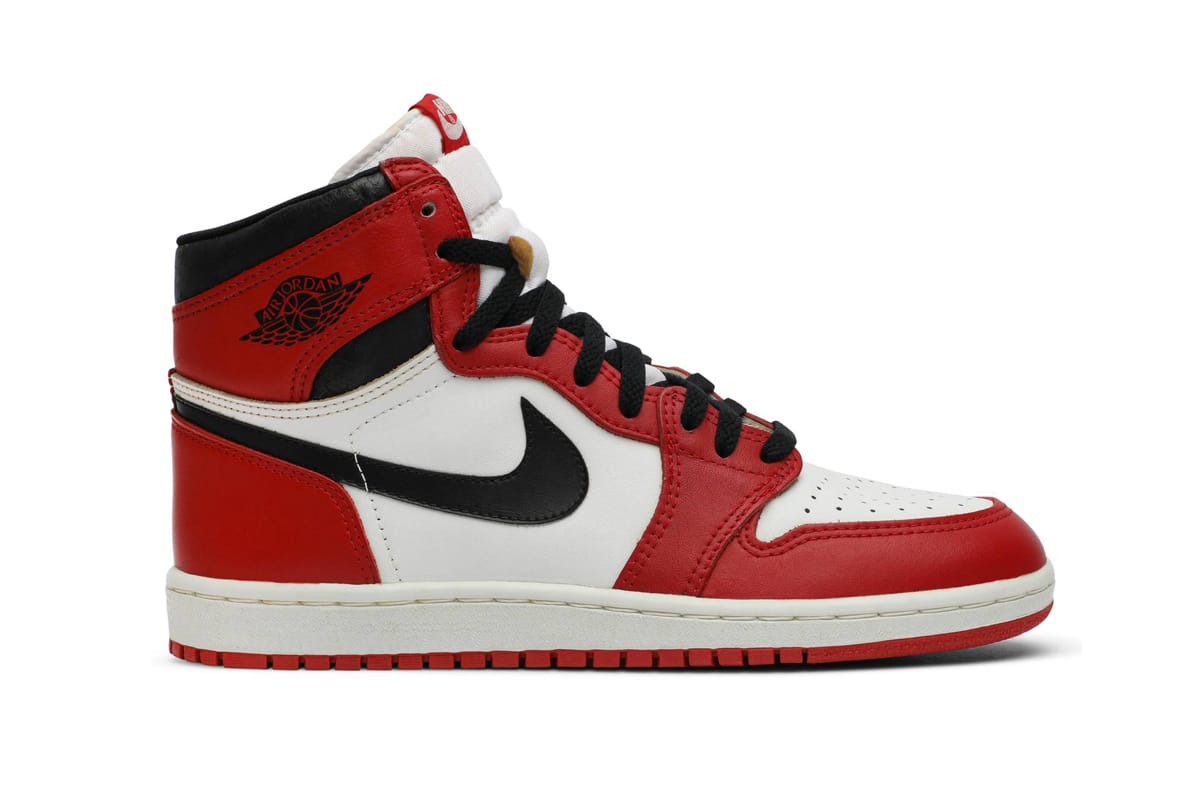 Release Date: September 14, 1985
Lowest Price: $9,500 USD
Conceptualized by Peter Moore, the famous Air Jordan 1 High changed the sneaker game after it was released in 1985. This first edition has a “Chicago” inspired colorway that honors the colors of the Chicago Bulls in full-grain leather. The original Air Jordan 1 was worn by Michael Jordan in 1984 and 1985. 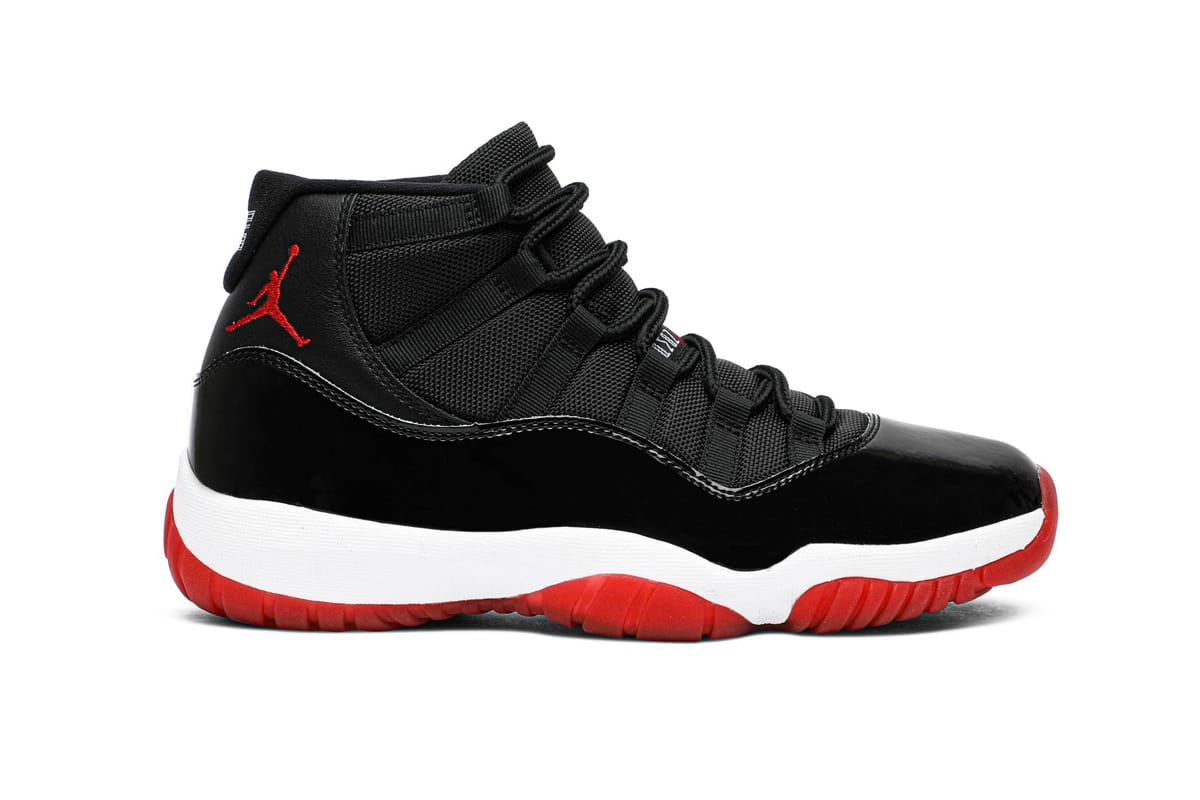 Release Date: December 14, 2019
Lowest Price: $260 USD
Inspired by the original colorway that debuted in 1995, this Air Jordan 11 Retro in the “Bred” colorway features the Chicago Bulls colors. With black mesh on the upper and shiny patent leather, the Varsity Red outsole pops on this shoe. Jordan first wore this model during a 1996 NBA championship playoff run, but this edition was distributed in December 2019 with original details like signature Jumpman branding and Jordan’s number 23 stamped on the heel.
Source: Read Full Article