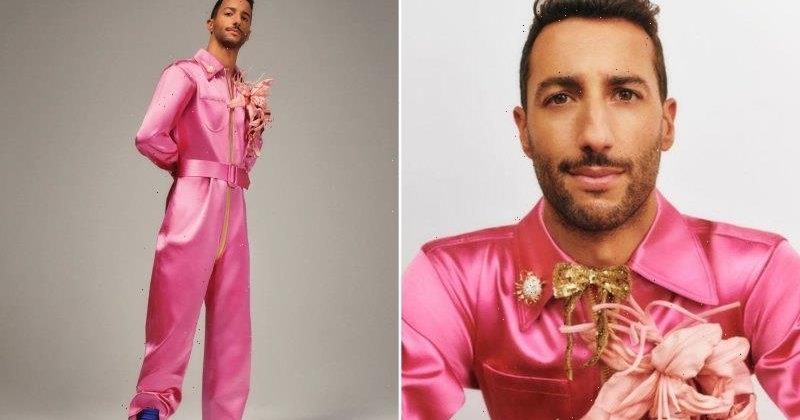 Just when you thought nothing could be louder than the roar of a Formula One race car, take a look at McLaren driver Daniel Ricciardo in a shocking pink Gucci jumpsuit with a gold zipper and Tiffany & Co. diamond brooch on the collar. The arresting portrait in Vanity Fair magazine by Nick Riley Bentham is something that you rarely hear used to describe a photograph of an Australian sportsman – FAAAABULOUS. 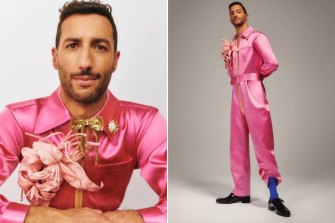 In the pages of GQ, Men’s Health and advertisements male sports stars have been relegated to stiff portraits in sportswear, tuxedos or tight white underpants, staring at five-figure watches or clutching fragrances destined for the crowded shelves of Chemist Warehouse. French driver Gasly in a jaunty striped Saint Laurent top, silk Hermes scarf and rose cherry blossom brooch breaks outdated taboos faster than a lap around the Albert Park track for the Melbourne Grand Prix.

A high-kicking Russell in a dandy polka dot scarf from Turnbull & Asser, Louis Vuitton monogrammed jacket and pink socks as bright as Ricciardo’s jumpsuit, is not camp, effeminate nor androgynous. It’s simply fashion, which is a new frontier for sport – soccer star David Beckham’s more adventurous looks and five-time NBA champion Dennis Rodman’s sequined crop tops in the ’90s aside.

The Vanity Fair article is prompted by the success of the Netflix documentary series Drive To Survive, now airing its fourth season, which could explain this cataclysmic collision of sport and fashion. The gripping reality soap opera has attracted a greater female audience to F1, removing misplaced fears that male athletes must purely appeal to manly men drowning in a sea of Lynx body spray, Pringle crumbs and stubbie twist tops on a condemned sofa.

At a Melbourne Fashion Festival dinner on International Women’s Day hosted by Viktoria + Woods, the main topic of conversation among the mostly female crowd, fresh from the front row, was the personalities in Drive To Survive and plans for the upcoming Melbourne Grand Prix. Wage parity and gender fluid jackets were a distant second and third.

Fingers crossed that at this year’s Brownlow and Dally M awards the focus can shift from WAGs in Jason Grech and J’Aton to the actual players in printed Prada jumpsuits, Cerrone brooches and the occasional Carla Zampatti skirt.