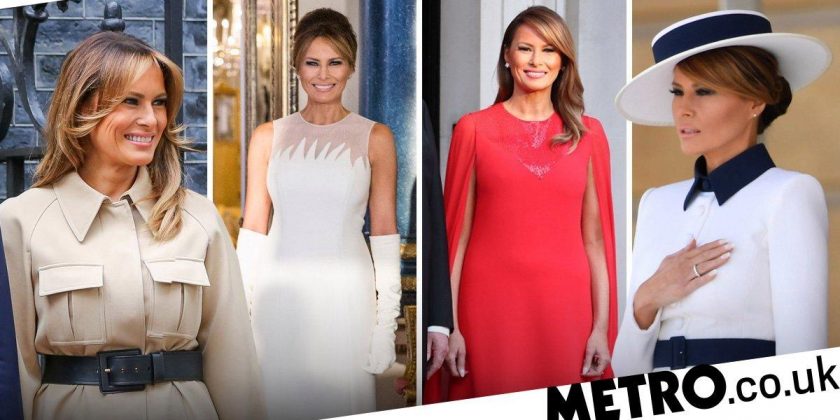 Melania Trump is known for her love of designer brands.

That’s not to say she doesn’t wear high street clothing; in 2018, the First Lady wore a green military-style jacket from Zara that costs just £39.99.

The jacket had the words ‘I really don’t care, do u?’ written across the back and was a controversial choice, given Melania was on her way to Texas to visit immigrant children.

More often than not however, she opts for luxury fashion and is rarely seen in the same outfit twice.

For her visit to the UK this week with husband Donald Trump, the president of the US, she stuck to her expensive tastes.

And the show started before she boarded the plane.

On her way to board Air Force One, Melania wore a Gucci shirt dress, which featured images of London, such as Big Ben and the Houses of Parliament – a nod to their pending visit.

Meanwhile the US president, Donald Trump, opted for a dark navy suit, white shirt and blue tie, along with a small pin of the United States flag.

Make of that what you will.

Melania chose a subtle yet colourful outfit for her arrival at Stansted Airport.

The 49-year-old disembarked the plane wearing a navy blue pencil skirt from Michael Kors and a red, white and blue printed pussy bow blouse from Burberry. She paired the ensemble with a a navy jacket, thrown over her shoulders.

Later in the day, Melania changed into a white pencil dress with a navy trim and belt from Dolce & Gabbana, which featured button detailing on the top half of the dress.

As we all know, the Queen loves a nice hat – so it comes as no surprise that the First Lady perfected her look with a matching hat by Hervé Pierre for the ceremonial welcome and garden party.

The outfit, which some said paid homage to British style, was compared to classic looks worn by the fictional characters Mary Poppins and Eliza Doolittle.

On Monday night, at the state banquet, it was time for glamour.

Melania went for an understated look in a sleeveless Dior gown in dove grey, paired with long white gloves.

The Queen wore a gown in a similar colour.

Melania chose a Celine trench coat for her meeting with Prime Minister Theresa May and her husband Philip May.

It was a rare fashion moment for her, as the First Lady rarely recycles outfits and wore this one a year ago.

She paired the look with a thick black belt, cinched at the waist, black leather gloves and an Hermès bag.

For the second state banquet, Melania pulled out all the stops.

Accessories were kept to a minimum with a pair of pearl earrings.