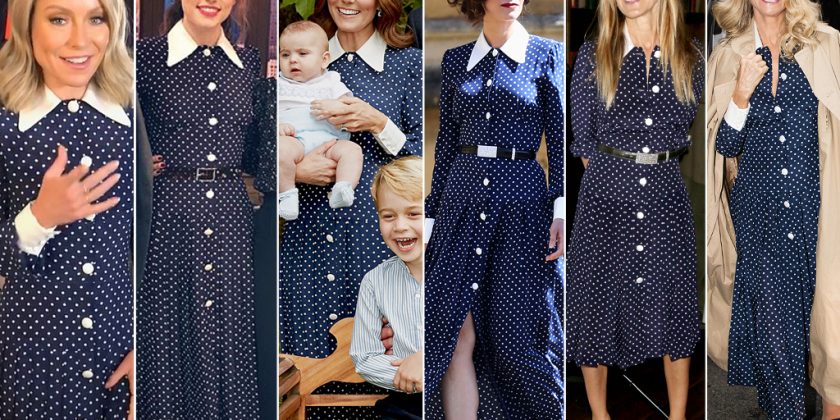 On Tuesday, Kate Middleton was pictured wearing a navy blue polka dot dress that gave us a serious shock of style déjà vu.

Kate posed in a new royal family portrait taken in honor of Prince Charles’ 70th birthday wearing a button-down midi dress with white pointed collar that you may have noticed on a few other high-profile celebs. Everyone from Sarah Jessica Parker to Christie Brinkley owns the dotted Alessandra Rich dress, so we decided to track down every single star sighting. See which celebs love this look — then shop the dress for way less.

When Kate posed in the cute and candid photo with her family (which included a rare new sighting of Prince Louis!) in the polka dot dress, we had to do a double take. Just a few months ago, a guest at her brother-in-law Prince Harry‘s royal wedding wore the exact same midi-length frock.

Meghan Markle’s Suits co-star, Abigail Spencer, arrived at the royal wedding in May wearing the same polka dot piece as Kate. Spencer styled it with a matching blue fascinator for the occasion.

Another double-take duo: Kelly Ripa and Daisy Ridley. Last September the Star Wars actress stopped by Live with Kelly and Ryan in the playful number and posed for a pic with Ripa to show off the full look.

Fast forward to May 2018 and Ripa took the dress for a spin during another episode of Live with Kelly and Ryan, then filmed a behind-the-scenes video afterward explaining the origin of her purchase. “I would like it noted, for the record, that when Daisy Ridley was on our show, many moons ago — see how I said ‘many moons’, a Star Wars reference —  I ordered this dress then,” she explained. “Then Abigail [Spencer] wore it to the [royal] wedding and I was like, ‘Ugh, now I can’t wear it at all because people are going to say I’m copying off of the royal wedding when it’s been hanging here in my closet.’”

Two other style stars, Sarah Jessica Parker and Christie Brinkley, gave the polka dot dress their own stylish spin on the streets of N.Y.C. in the prim and proper outfit – though unlike the other four, they unbuttoned the collar a bit for a more relaxed look.

So now that you see that it can be worn everywhere, from church services to your annual family holiday card portrait, you need a version for yourself to wear this year. Shop these looks for less and be the best-dressed guests all season long.