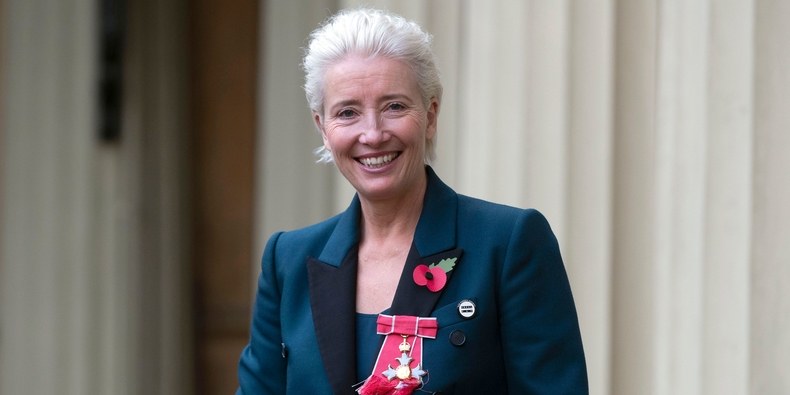 In her time as an Academy Award-winning actor, Emma Thompson has repeatedly made the case that high heels are not mandatory for walking red carpets. Now, in her new role as Dame Commander of the Most Excellent Order of the British Empire, she can outlaw those pesky stilettos once and for all. (Maybe? Probably not.) Still, on Wednesday, as she received her damehood at Buckingham Palace, Thompson proved yet again that the heels do not make the woman, namely, by wearing regular old sneakers to the royal event.

Prince William was tasked with bestowing the prestigious title upon Thompson, who was accompanied by her husband, Greg Wise, and their two children, daughter Gaia and son Tindyebwa Agaba. The Beauty and the Beast star attended the auspicious occasion in a navy blue pantsuit that served as the perfect canvas for her new assortment of dame-worthy pins and other decorations. Peeking out under the wide-legged pants of her suit were a pair of what appear to be crisp white Adidas Stan Smith lace-up sneakers, because when you're a dame, you can wear whatever you want to the Queen of England's personal residence.

While receiving her new title, Dame Thompson came close to making a royal faux pas: She told the Associated Press afterward that, while face-to-face with Prince William as he named her a dame, she'd almost gone in for an unsanctioned kiss. "I love Prince William. I've known him since he was little, and we just sniggered at each other," she recalled. "I said, 'I can't kiss you, can I?' And he said, 'No don't!"

Thompson previously spoke about receiving the honor in an interview on Late Night With Seth Meyers shortly after she was invited to the damehood in June. "I've become much more commanding since it happened," she joked. "I've also had every seat I sit on just made slightly taller. It's subtle, so people are lifting their heads slightly more toward me than they did before, but they're not quite sure why." She continued, "They send you a letter saying, 'Will you accept it?' You can choose not to. You can choose to say, 'Well, of course we don't have an empire anymore, thank God, because it was a ghastly, colonial, racist, dreadful undertaking on every level,' and actually have some moral principle about it. Or, you can be like me and think, 'Hmm, it's gonna be a really nice badge.'"

Wednesday's ceremony was far from the first time Thompson has disparaged a pair of achingly high heels. At the National Board of Review awards gala in 2014, she accepted her Best Actress award barefoot. "I've taken my heels off as a feminist statement really, because why do we wear them? They're so painful. And pointless, really," she explained at the time. "You know, I really would like to urge everyone to stop it. Just stop it. Don't wear them anymore. You just can't walk in them, and I'm so comfortable now."

Perhaps most memorably, while taking the stage to present an award only a few days later, at the 2014 Golden Globes, Thompson carried her red-soled Christian Louboutin heels in one hand and a martini in the other. "I just want you to know, this red, it's my blood," she quipped, before throwing the stilettos over her shoulder. So that's where Cardi B got "These is red bottoms, these is bloody shoes"!