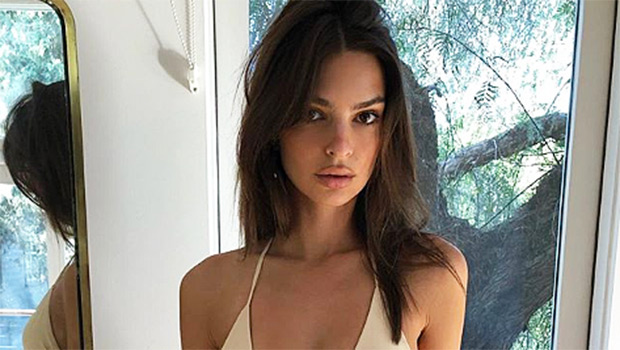 Emily Ratajkowski has no shortage of sexy swimsuits! She shared a photo of her wearing the teeniest bikini bottom ever.

Emily Ratajkowski has her own swimsuit line and for good reason – she practically lives in them! The model, 27, took to her Instagram account on Dec. 20 to share “details” from an intimate photoshoot for her swimwear line, Inamorataswim. The first photo showed her upper back as she wore a string bikini top and oversized earrings, but the second image was extra sexy. Ratajkowski donned a black high-waisted thong bikini bottom that made her butt essentially look just like the peach emoji.

While the Gone Girl star is known to show a ton of skin, she isn’t here for anyone telling her she can’t be sexy and a feminist. “The only argument that I think is sort of interesting is the conversation that somehow I’m playing into a patriarchal society by looking the way I look and capitalizing on my sexiness,” she told Vogue Australia. “But I don’t really care if me wearing a crop top is somehow playing into some patriarchy, because it makes me feel good about myself, and I shouldn’t be limited on that.”

She added, “Making rules as to what a feminist should look like or wear is insane to me.” Amen, sister!

She also elaborated on why she thinks people tend to criticize women for their appearances (and obviously never hold men to the same level of scrutiny.)

“I think it’s sexism,” Ratajkowski said. “I think in general people don’t really want to hear women talk about these kinds of things, and especially women who make money on how they look: they especially resent them using their voice.”