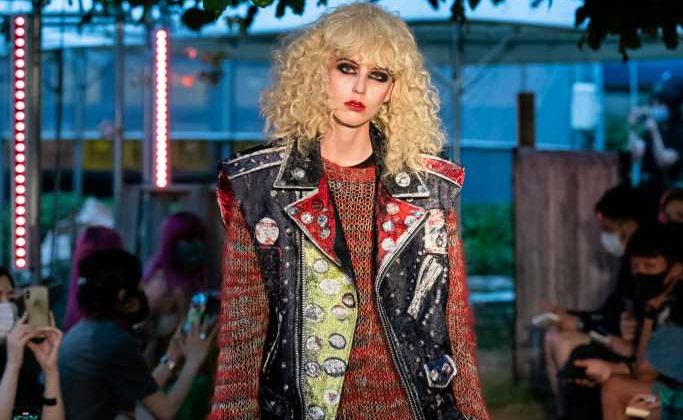 Masayuki Ino was inspired by nature for spring, choosing a variety of sustainable materials for his collection. But as usual, he also ensured he would not be pigeonholed.

“I was working with sustainable fabrics and I was thinking about the idea that something is good because it’s eco-friendly. So then I decided to also do things that are considered bad for the environment, like adding a print to the back of a jacket made from mushroom leather. In the end, it’s not good and it’s not bad. It’s clothes,” Ino said after the show.

Including the vegan leather made from mushrooms, the designer worked with several materials that originate from plants, which also inspired his choice of location for his show. Staged at an organic farm on the outskirts of Tokyo, guests were seated on crates under a canopy of grapevines. Models emerged from a greenhouse to walk the grass-covered runway, and a trio of goats grazed off to the side.

Ino’s pieces included punk-inspired motorcycle vests and metallic vinyl shorts, as well as crocheted tank tops reminiscent of your grandmother’s afghan. He showed silhouettes that ran the gamut from relaxed and roomy to almost comically outsized. Padded bomber jackets and loose trousers were turned out in earth tones, contrasted by shiny silver, blue and pink metallics. Ino closed the show with two looks made from deconstructed suits, which he remade into a giant patchwork jacket, paper bag pants, and a long vest.