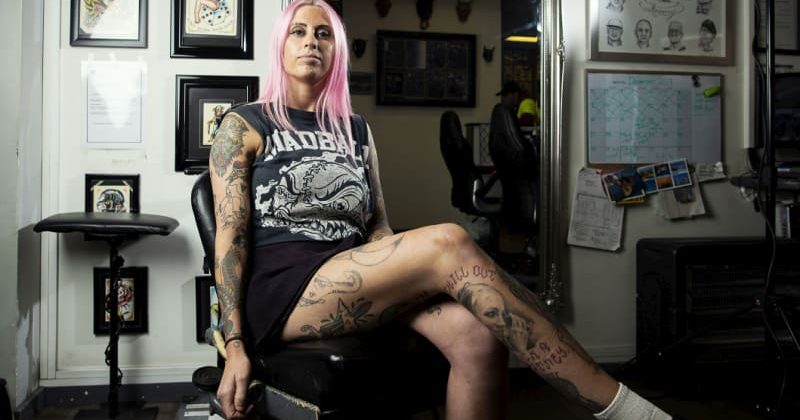 Ever since Jess Buxton was a little kid, she's wanted to be tattooed.

She saw herself in adulthood sporting a butterfly and an "electric blue motorcycle" – the latter, she gave a miss, but the butterfly is inked on her ribcage surrounded by a flurry of other designs. 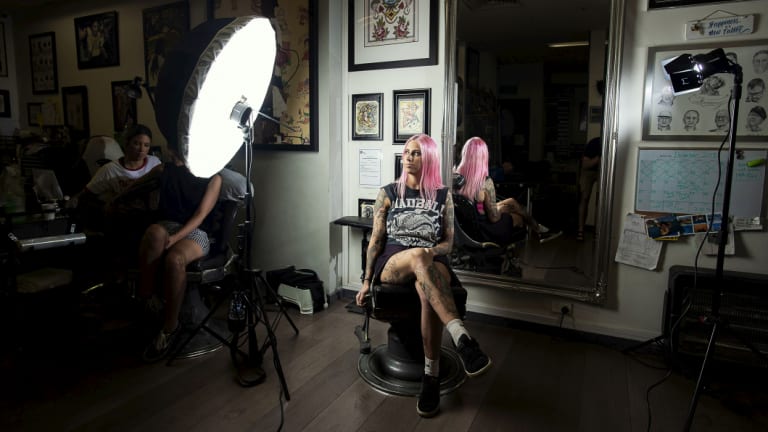 Jess Buxton, who works at The Illustrated Man tattoo parlour, sees a lot of customers with tattoo regret.Credit:Christopher Pearce

"My whole left arm is all the dogs I've had, which is special to me … [but] I've got all different kinds on my body. I've got realism, traditional, neo-traditional, and cartoony stuff," she said.

"As a kid, I always loved them, which is weird because I was never around them. My parents hated them.

"They thought I was going to be an unemployed, tattooed bum because they thought nobody would ever hire me." 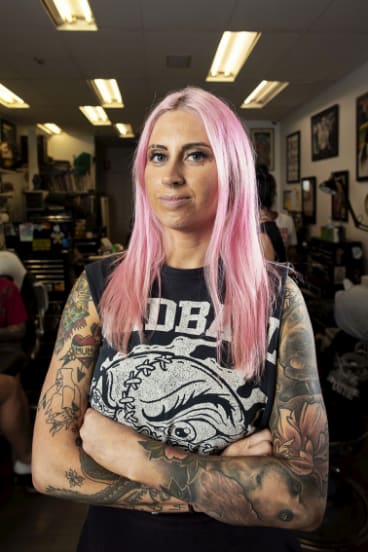 Jess Buxton says an increase in the number of Australians who are getting tattoos is likely because of changing social norms.Credit:Christopher Pearce

These days, the 28-year-old does piercings and works on the reception desk at The Illustrated Man tattooist in Surry Hills. She's learning to tattoo, but is grateful to just be in the industry.

Her family are more accepting of her love for the art – her mother yells, "are you 'right?", to people who give her disapproving looks in the streets – and it appears the masses have followed in her stead towards embracement.

New research by McCrindle, based on a survey of 1013 Australians, shows the number of people getting tattooed has hit a record high. One in five – or 20 per cent – of individuals across the country have one or more design.

But it seems that along with the increase in ink has come a whole lot of regret.

Three in 10 Australians with tattoos say they regret getting a tattoo to some extent, and almost one in 10 have commenced or looked into costly tattoo removal procedures.

Even Ms Buxton has chosen to part ways with one of her pieces, enlisting the help of a friend in the industry to do laser tattoo removal on her thigh.

"[The design is] a big elephant on a ball and I just never really liked it … I like tattoos that go with the flow of my body and it just doesn't," she said.

"I remember thinking, the day he put the stencil on, 'I don't know if I like it'. But I just went along with it because I was young. It was just before my 21st birthday."

Ms Buxton says it's not just the young and "rebellious" who are seeking a return to bare skin, and the statistics appear to back her up.

"If anything, older people [who come into The Illustrated Man] are wanting the cover-ups," she said.

"A lot of them were adults and they've gotten their partner's name on them in their 30s. They've broken up five years later and they just don't want to look at it anymore."

Ms Buxton says the other type of tattoo frequently covered up are small, immature designs that sometimes look odd with age – "but they're never big deals".

"I would just say don't get your partner's name tattooed!"

McCrindle's research, too, found that Australian women with tattoos slightly outnumber men – 21 per cent, versus 19 per cent respectively.

Ms Buxton puts this down to the fact that women "have more guts" and a higher pain tolerance when it comes to facing the needle, as well as shifting social norms.

"Back in the day, when girls got tattooed they were labelled as tramps … now it's considered kind of sexy if a girl has tattoos," she said.

"I think feminism might have something to do with it. It's a bit more equal – we can do what we want now."

Although, she says, disapproval in older generations hasn't been fully depleted. On one recent occasion, she was walking down the street when a young boy smiled at her and approached her.

She smiled back and went to greet him, before a man – appearing to be the boy's grandfather – pulled him back.

"He gave me this filthy look … but I know it's not a reflection of me," she said.

"I don't get offended because I know it's just other people's ignorance. I don't let it get to me. I know I'm a good person and if somebody wants to judge me like that, they're the bad person."