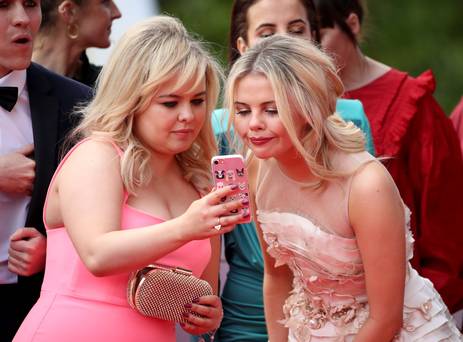 The 25-year-old actress was one the A-lister in attendance at Sunday night’s TV BAFTAs wearing a tulle embellished mini-dress by Helen Cody, a Dublin-based designer whose work often graces the red carpet on Amy Huberman, Sarah Greene and Saoirse Ronan. The Channel 4 star was one of the recent guests at the Peter Mark VIP Style Awards last month where she met a number of talented Irish couturiers, including Cody, who was nominated in the Best Irish Designer category.

She shared some behind the scenes footage of Saoirse Monica’s dress on Instagram which took 150 hours to put together. She finished off her look with a pair of nude Christian Louboutin heels and jewellery from Loulerie, the Dublin boutique which specialises in stocking exclusive, high-end brands.

Derry Girls was nominated in the Best Scripted Comedy category and while they didn’t take home a statue, Cork native Fiona Shaw did win Best Supporting Actress on the night. Her red carpet choices are reflective of a self-described “passion for fashion” as she tells the new issue of Stellar magazine that she spends much of her downtime shopping.

“I’m mostly working and going to meetings, meeting up with my friends and probably doing too much shopping…other than that, I’m mainly into cooking. I find that quite therapeutic. It’s something I do to relax me.

“Luckily my passions is my job so that just involves in some sense being an actor all of the time, whether that involves reading books or going to plays. I also unfortunately have a passion for fashion. I probably shop way more than I should.”