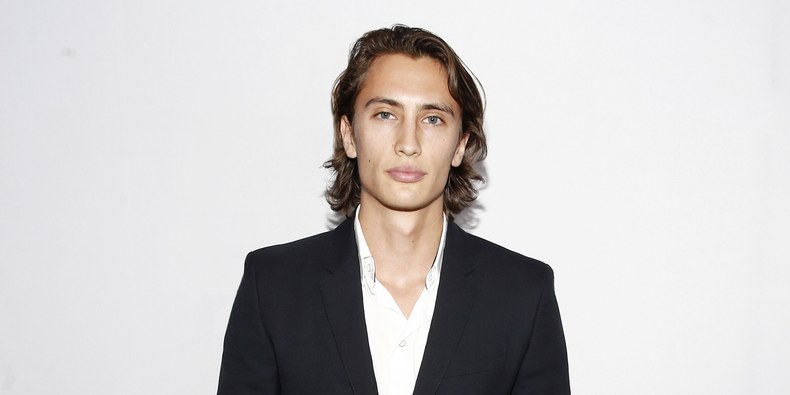 For a handful of years now, it's become common knowledge that any 20-something or under remotely related a supermodel—or even just simply someone famous—moonlights as a model. And yet, that almost wasn't the case for James Turlington, whose aunt, along with Naomi Campbell and Linda Evangelista, is a member of the legendary '90s trio known as the Trinity.

And yet, just a few months ago, you'd never know that Turlington was even related to Christy Turlington, his supermodel aunt (his mom is Turlington's sister Kelly). The 6'3" 25-year-old has spent the bulk of his adult life as a professional baseball player, bouncing around between minor league teams after studying sociology at UC Santa Barbara, until he was eventually drafted by the Los Angeles Dodgers in 2016.

But this summer, Turlington—who apparently also goes by "Mr. Carter"—suddenly switched gears, as he announced to his now 11,000 Instagram followers with a quote from the movie Moneyball, about how there comes a time when "we can no longer play the children's game." And for Turlington, of course, that game—"the greatest game"—was baseball: "As a kid who dreamt of playing in the big leagues I look back on my career and am so thankful to have accomplished the goals I set out to achieve. From playing Division 1, going to the College World Series, to being drafted and having the opportunity to play professionally. I wouldn’t change a thing!," he wrote. "But as one chapter ends, another begins. Excited to start this new chapter and continue to grow and evolve as a person."

That chapter, of course, turned out to be modeling. Within a week, Turlington had made the news official by posting a portrait from his first-ever photo shoot, in which he took care to thank his supermodel aunt for "showing [him] the way." He also happens to bear a striking resemblance to Christy in the photo—at least to Donna Karan and a significant number of the super's followers, who jumped into the comments section of her repost and helped it rack up more than 41,000 likes.

Turlington, as an increasing number of talents before him, signed to IMG last month. But unlike some of the rest, it only took a few months for him to resurface, for the first time in the latest stage of his career—on the runway of Rag & Bone, no less. Since then, Turlington has continued to put in appearances at this season of New York Fashion Week, from the the Daily Front Row Fashion Media Awards, which he attended with his aunt, to the runway of Brandon Maxwell, where he walked alongside Bella Hadid. (Not to mention a who's who of male models including Lucky Blue Smith, Garrett Neff, and Sean O'Pry.)

From the look of it, life as a model might not be too different from life as an athlete for Turlington. He spent a good chunk of his Tuesday, aka the tail end of New York Fashion Week, lifting weights at the Dogpound, models' (and a few Olympic-level athletes') unofficial gym. Only time will tell if he—and (or his aunt)—will also be going on to London, Milan, or Paris in the coming weeks.

Related: Christy Turlington's Style Evolution, From the '90s to Today