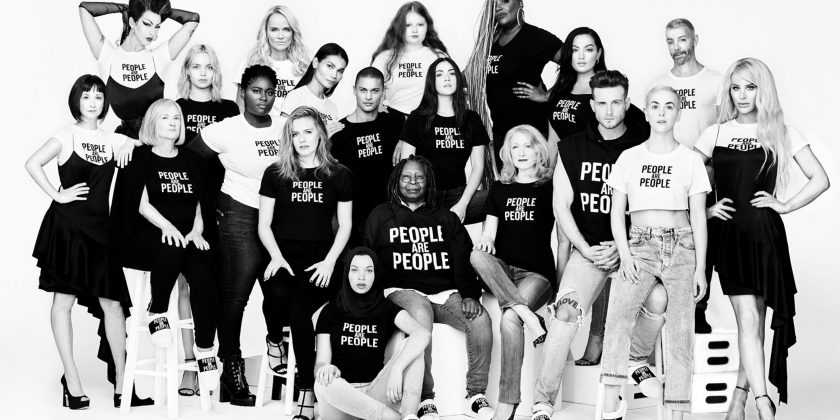 For over a decade, Christian Siriano has made it his mission to make the fashion industry a more inclusive place, whether it’s on the runway or the red carpet. Now, he’s spreading that message even further — to the beauty industry! — with the release of his newest perfume, People Are People.

“With the name of this fragrance, I wanted to show that I don’t care who you are, you can still be a part of fashion,” Siriano told PEOPLE exclusively. “You shouldn’t feel alienated by fashion. You should feel like you can be celebrated.”

The name People Are People first appeared on Siriano’s Fall 2017 runway, when he put the slogan on a black tee and paired it with an evening magenta maxi skirt with a thigh-high slit. “Now, I’ve been trying to make it an even bigger thing,” he says. “Until you put things in front of people’s face, they don’t understand or don’t get the art behind it.”

“It’s scary times out there,” says Siriano. “Acceptance is such a huge topic. It is. It’s not enough to just make pretty clothes anymore. As designers, we have a responsibility to put [ideas] out there, to get people to understand them. We have this voice, and I want to use mine to celebrate people.”

To toast to the fragrance’s release, he gathered his family, friends and a few of his famous supporters together for a series of portraits. The main image includes a range of people of all ages and backgrounds, from stars like Whoopi Goldberg, Nico Tortorella, Patricia Clarkson to his mom Joye and sister Shannon.

“I wanted it to be a diverse group of people to show that I don’t care who you are or what walk of life you come from, you can wear this fragrance, you can buy our clothes—you should feel celebrated in some way,” he says.

Other portraits feature individual stars, like Alicia Silverstone and Danielle Brooks, in the slogan tees.

The images are simply to set an example, he says: “This is not for advertising. It’s not to make money off anything, we’re not doing billboards, we’re not doing ads in magazines. This is really just to bring a little awareness of what I think a fashion editorial should look like.”

“It’s a call to action to show that this is what is beautiful in our fashion world, or just in our world in general,” he says. “It’s about seeing all these beautiful people celebrating one another together, which I think is really a great thing.”

The bottle itself, which is filled with a bergamot, pink pepper and jasmine-noted juice, also carries the message of inclusivity – quite literally, as People Are People is written on the outside. It’s a black-and-white version of his first fragrance bottle’s shape, Silhouette IN BLOOM, which launched in February.

“This was more about being graphic and clean, almost like a blank slate,” Siriano explains. “You’re looking at this white bottle that literally just says People Are People, so people don’t think about anything else but that idea.”

Of course, he wants everyone to try it.

“If you want to wear the fragrance and you’re a boy, a girl or you don’t identify with anything, then you should feel comfortable going in a store and buying this fragrance,” he says. “I think alienation is a big part of why people don’t shop Prada. They think, ‘Oh, that store doesn’t have anything for me.’ But why? That’s what I’m starting to do.”

Being inclusive is also about being affordable, he says, which is why this 3.4 fl oz. bottle is available at Payless stores and payless.com for $34.99.

“Every walk of life shops at Payless,” says the designer. “You can literally be a 15-year-old girl who just loves shoes and bags and fashion or you can be a 75-year-old woman who has five kids is trying to get her family dressed. I wanted that range. I actually think there’s no other retailer like that that would have made sense for me, so it was a good fit.”