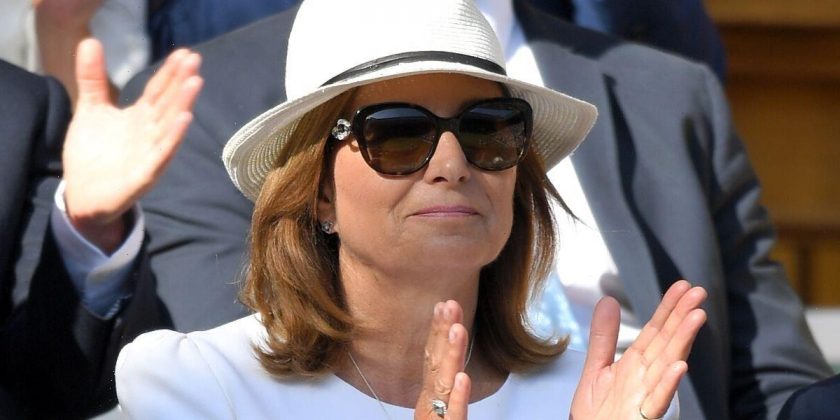 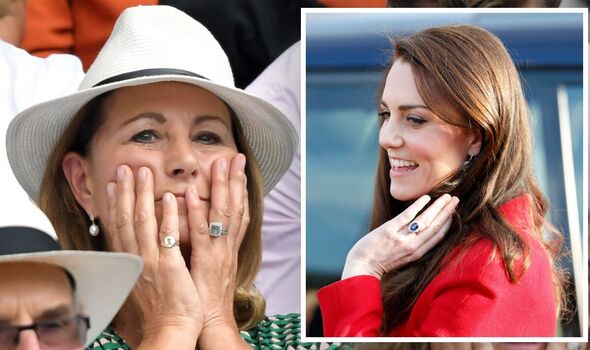 Kate Middleton’s parents Carole and Michael have been married for over 42 years. The couple tied the knot on June 21, 1980, at the Church of St James in Dorney, Buckinghamshire. But what did Carole’s engagement ring look like?

The Princess of Wales’s mother has been spotted many times wearing her stunning engagement ring.

The jewellery piece is not dissimilar to her daughter, Pippa Middleton’s ring from her husband James Matthews, whom she married back in 2017.

Photos of Carole at the Wimbledon Tennis Championship back in 2017 and 2019 gave a close-up look at her stunning rock. It features a square blue stone in the centre surrounded by diamonds.

Although it doesn’t have the same coloured stone in the middle, Pippa’s ring is also an art deco design.

He said: “Carole’s ring is inspired by the art deco style of the 1920s and 30s. Featuring what looks to be a four-carat Asscher cut diamond, it is surrounded by an octagonal surround of round brilliant diamonds to give it that feel of yesteryear.”

According to the expert, this type of diamond is “unique” for a special reason, making it quite an expensive piece of jewellery.

Mr Allen explained: “Asscher cuts are uniquely clear and require a high clarity. So if this were of top quality, this would fetch in excess of £200,000.”

Kate Middleton’s ring on the other hand is widely reported to be worth double the price at £400,000 after belonging to the late Princess Diana.

Asscher cut diamonds were invented in 1902 by Joseph Asscher, who formed what is now known as the Royal Asscher Diamond Company.

This is a prestigious diamond cutter who provided jewels for Queen Juliana of the Netherlands.

Not only must Asscher-cut diamonds be very high-quality, since they can’t hide blemishes, but antique ones are very rare.

Carole has been pictured wearing the beautiful jewel on her ring finger on numerous occasions over the past few years.

However, it may not actually be the original one Michael gave her when he popped the question.

Michael and Carole visited Kate and Prince William at the Lindo Wing at St Mary’s Hospital shortly after Prince George was born in 2013.

Pictures at the time showed Carole wearing her gold wedding band next to a solitaire diamond.

Carole’s switch to a coloured stone may have been inspired by Kate’s beautiful ring, which features a stunning 12-carat oval cut sapphire that reportedly steadily goes up in value each year.

Carole met flight dispatcher Michael while she was working as a flight attendant for British Airways.

They raised the children in a Victorian house in Bradfield Southend near Reading, Berkshire.