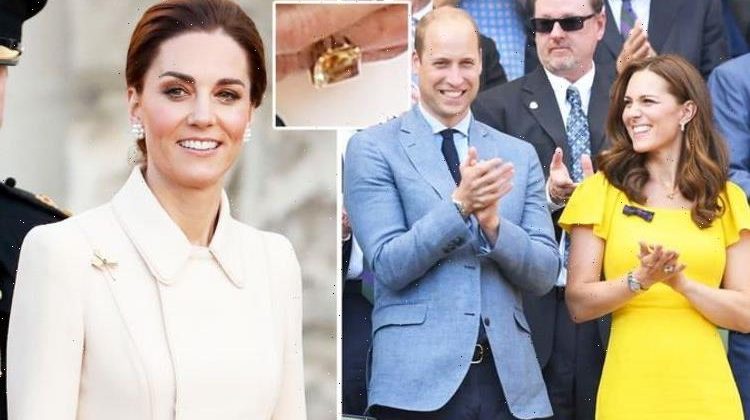 Kate Middleton has worn all types of jewels ranging from royal tiaras to simple necklaces. The wife of Prince William has been seen wearing a pricey gold ring that is not part of the Royal Family collection.

Prince William proposed to Kate in 2010 and she was given a sapphire and diamond engagement ring which once belonged to Princess Diana.

On her wedding day, the royal was also gifted a Welsh gold wedding band which is similar to rings worn by others in the Royal Family.

Kate regularly wears the items with a rose gold ring on her wedding finger.

The simple third band was believed to be a gift from Prince William following the birth of Prince George.

Aside from the jewels with a lot of royal significance, the Duchess has other rings which appear to be from her private collection.

This includes a citrine stone ring which could cost a huge sum of money, Ben Johnson Managing Director at Miltons Diamonds claimed.

“The ring looks like a very large citrine stone to me,” he said.

The mother-of-three has donned the ring for a number of events in recent years.

However, it may have been in her rotation well before she married Prince William.

Ben continued: “Media reports have suggested that this ring is a new addition to the Duchess of Cambridge’s collection, but there is proof she owned it already, as she was photographed wearing it on a night out with Pippa in 2008.

“If the Duchess did own this prior to her marriage, perhaps she has rekindled a love for her own pieces.

“It could be of sentimental value as a piece of jewellery that is hers alone and not borrowed from the Royal Family’s collection.”

The expert explained the stunning ring could have “sentimental” value to the Duchess.

It also may give some strong symbolism due to the hidden meanings of the citrine rock, he continued.

Ben added: “The citrine rock could also be making a reappearance because of what the stone is said to represent.

“It is widely claimed that the citrine crystal emanates optimism and can be used to direct personal will and decisiveness.

“This would explain the motivation behind Kate’s decision to wear it on occasions when she is not accompanied by the Duke of Cambridge, attending events on her own terms.

“She is an experienced royal now, capable and independent.”