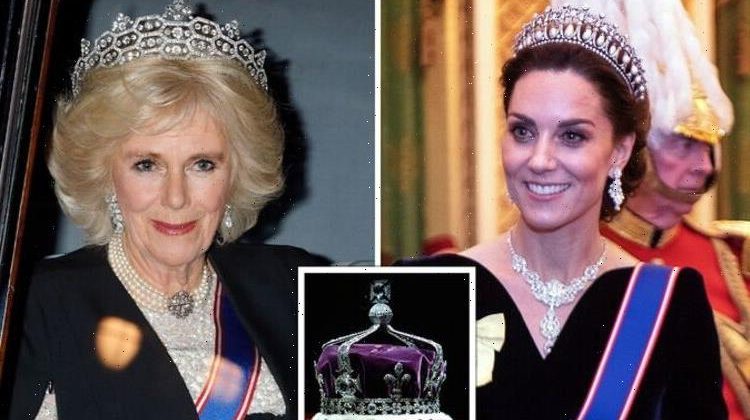 The Koh-i-Noor diamond has been in the possession of the Royal Family since the reign of Queen Victoria, and every Queen Consort since has worn the diamond in their crown. The last person to wear the diamond was the Queen Mother. And now the Queen has declared her wish for Camilla to be Queen Consort during Prince Charles’ reign, it is widely thought Camilla will be the next person to wear the Queen Mother’s incredible crown during Charles’ coronation.

The Koh-i-Noor diamond is one of the largest cut diamonds in the world, and before it was cut, it was thought to weigh in at more than 190 carats.

The person behind the diamond’s iconic oval cut was Prince Albert, Queen Victoria’s beloved consort, who was disappointed that the diamond’s display at The Great Exhibition in 1851 had received little fanfare from attendees.

Daena Borrowman, Marketing Manager at jewellerybox, told Express.co.uk: “The diamond was originally over four centimetres, over three centimetres wide and over one centimetre deep, with 169 facets.

“It had a high dome, with a flat base and triangular and rectangular facets. Prince Albert had it polished, reducing its weight from over 190 carats to the 105.6 carats it is today.

The Koh-i-Noor diamond has been worn in the crowns of several generations of royal women since the reign of Queen Victoria, so it will likely be worn by Camilla and then the Duchess of Cambridge when Prince William is King.

Claire Beatson, jewellery expert from the ethical jewellery brand Nightingale, told Express.co.uk: “In 1851 Queen Victoria and Prince Albert had the stone recut and polished to its current oval brilliant shape ‘in order for light to refract more brilliantly’.

“Victoria wore it as a brooch for many years, but the stone has been used in the crowns for the queen consorts since including Queen Alexandra and Queen Mary, until finally being placed in front of the Queen Mother’s crown.

“This crown was created in 1937 by Garrard, for King George VI’s coronation.

Although the diamond is undoubtedly lustrous, a “dark hole” is visible when looking at it due to the way it was cut in 1852.

Helen Dimmick, gemmologist and diamond grader, explained: “It has what we call a large culet that is unusually broad; the facet at the base of the diamond which can be viewed as a dark hole, but this doesn’t suppress the amazing sparkle and life most especially seen when carried through the beautiful sunshine in London on the Queen Mother’s carriage on the way to her funeral procession to Westminster Abbey.”

The Koh-i-Noor diamond is thought to have been first mined in India. But the history behind the diamond is very complicated, and several countries have claimed ownership of the enormous stone.

India, Pakistan, Afghanistan and Iran have all made demands for the Koh-i-Noor diamond to be returned to their respective countries over the years.

India has made several claims for the diamond in recent decades, but the British Government will not part with the gem. It has been argued the diamond was gifted to the British Crown by Duleep Singh, son of Ranjit Singh.