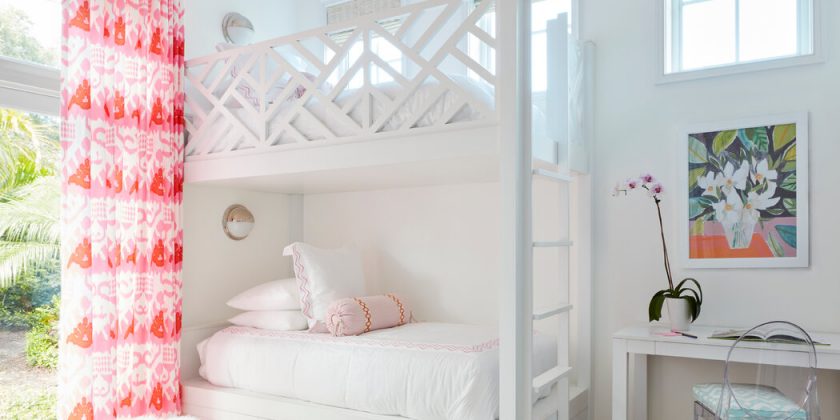 This article is part of our latest Design special report, about homes for multiple generations and new definitions of family.

The bunk bed, born two centuries ago as an austerity measure, is living in some splendor. For country homes, luxury hotels and yachts, architects and designers are theming and decking out the basic components of pillars, railings and ladders with timbers, zingy colors, playful cutouts and gingerbread.

In the realm of custom bunk rooms, “there’s always an element of whimsy,” said Kara Miller, an interior designer based in Jupiter, Fla., who has trimmed bunk beds in diagonal filigree based on Chinese Chippendale precedents. When clients start to plan new houses — “right out of the gate,” she said — the bedrooms’ windows, doors and closets are being configured to leave cubic footage available for bunk beds. She added, “You can let your imagination run wild with them.”

The trend has been partly attributed to Covid-19. As retreat from society may be required, some homeowners want to be prepared to hole up someplace cheerful and comforting, which can accommodate groups of people not necessarily willing to share mattresses. Liz Caan, an interior designer in Newton, Mass., said that her bunk room clients had said, in effect, “We want to be able to sleep a gazillion people.”

Owners report that bunk rooms free up floor area while generating a sense of camaraderie, and that openings between chambers allow for communication and clambering. “My grandkids just love going in and out of those portholes,” said Margaret Condit, whose Maryland shorefront house, designed by Purple Cherry Architects, has caramel-colored trim on its white bunk beds’ portholes. “Everybody says they want to sleep in that room,” she said.

Nostalgia also helps motivate new bunk commissions. David Williams, a marketing and investment executive based in Annapolis, Md., grew up and attended college while sleeping in bunk beds. Purple Cherry Architects designed twin bunk rooms for one of his homes, each with a U of six stacked beds trimmed in shiplap siding and painted off-white. He described the sets as “certainly a fun thing, and a great creator of space.” For his grandchildren and subsequent generations, he added, “I hope those bunks become a part of their history, as it has for me.”

The furniture form, however, is not as historical as it may seem. Natalie Larson, a bedding history expert in Williamsburg, Va., said there were records of bunk beds installed in the early 19th century in prison wards, railroad cars and military barracks. Bunk rooms have also been used in submarines, military ships, schools, summer camps, concentration camps and bomb shelters. In combing archaeological evidence and wills and inventories, among other sources, Ms. Larson said she had found virtually no evidence that bunk beds served residential or hospitality purposes before the 20th century. Homeowners long preferred lower-slung and more portable beds, which could be dismantled or moved aside in multipurpose rooms and sold off in hard times. And owners of hotels or taverns would simply have guests share mattresses.

By the early 1900s, moviemakers were portraying bunk beds unflatteringly. In the “Three Stooges,” Moe, Larry and Curly try to catch some sleep before crushing each other as rickety bed tiers pancake. In the Charlie Chaplin short film “Shoulder Arms,” floodwaters pour into bunk rooms on a World War I battlefield.

Not until midcentury does the bunk bed develop any aura of high style. In the “Brady Bunch,” the brothers Bobby and Peter shared a bunk bed painted sapphire blue, with matching quilted bedcovers. In the 1970s and ’80s TV series “Diff’rent Strokes,” the brothers Arnold and Willis Jackson, living in a Park Avenue apartment, tucked a desk under their L-shaped bunk bed with brown tubular supports vaguely modeled after tree trunks.

Jason Reid, the author of “Get Out of My Room! A History of Teen Bedrooms in America,” said that he watched “Diff’rent Strokes” when it was new: “I remember as a child coveting the bunk beds they had in their room.” Reid’s book quotes Greg Brady, the oldest of the three sons, who considered sharing a room with his brothers’ bunks “like a jail sentence.”

As the bunk room’s popularity grows, a few complicating factors have emerged. Changing the bedding calls for strength and agility while maneuvering in tight corners and atop ladders. “It’s exhausting trying to figure out how to make those beds,” Mr. Williams said. Children need to be monitored to prevent injury because of jumps or falls from bunks. Aging knees and hips, among other body parts, can be poorly suited to spending the night on upper levels.

A reporter recently decided to see how well her limbs and sense of balance, after nearly six decades of wear and tear, would tolerate the bunk-room experience. At the Arlo SoHo hotel in Manhattan, she climbed along walnut-colored bed frames connected by black ladders and pipe columns. Her joints made no protest, and from a top bunk, she enjoyed a sense of superiority, with a bird’s-eye view of former industrial buildings. Cordell Nelson, the hotel’s general manager, reminisced while he gave her a building tour. He said, “I always wanted a bunk bed when I was a kid.”