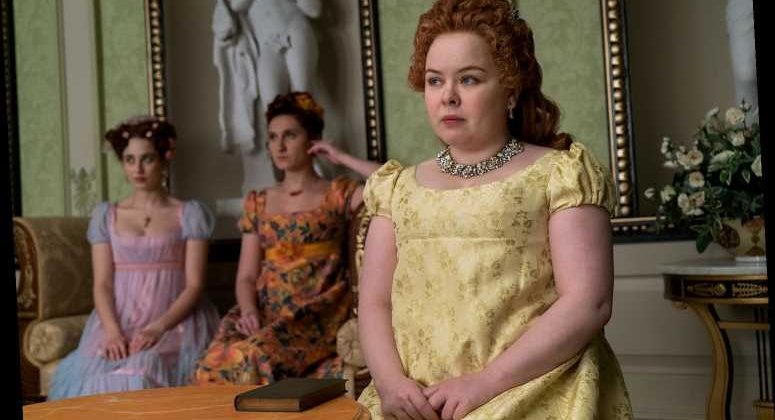 Bridgerton's scandal, steamy love-story plot lines and Regency costuming have captivated 82 million households (and counting!) as the Netflix show continues to break streaming records across the globe. But breakout star Nicola Coughlan, who portrays Penelope Featherington on the megahit series, says mastering the art of wearing 19th century high society fashion was more challenging than she had anticipated.

Between the waist-cinching corset, dramatic dresses and high heels, Coughlan, 34, admitted her balance was a bit off-kilter the first few days of filming, which resulted in a little accident on set involving one of her costars.

"So it was my first day on set and it is quite terrifying getting a big Shondaland Netflix job. You think, I just don't want to screw this up," the actress said during an appearance on The Kelly Clarkson Show.

"So they said to me, 'You're very tiny. Let's put you in heels.' And I thought yeah, I will do anything you want me to do. Yes," Coughlan continued. "It became evident pretty quickly that with the corset and the heels, my balance was not so amazing."

As she walked during a scene, Coughlan struggled to keep her balance and ended up colliding into one of her costars. "So I was walking along and I fell three times and the third time I was holding a parasol which in the wrong hand is a deadly weapon. I fell forward and stabbed Claudia Jessie, who plays Eloise Bridgerton, in the hand and she just started bleeding," she said. "But she's still my friend! But unfortunately there was a stabbing on the first day and I was guilty. It was not good." Based on the popular books by Julia Quinn, Bridgerton season 1 follows the esteemed families of British high society and their romantic pursuits through the lens of a mysterious gossip columnist, Lady Whistledown (voiced by Julie Andrews). The series was one of Shonda Rhimes' long-awaited projects as part of the eight-show deal she made with Netflix in 2017.

The show was was recently renewed for season 2, and has become the streaming service's "biggest show ever." Netflix said that Bridgerton was watched by a record 82 million households globally (and counting) since it began streaming on Christmas Day. The show made the top 10 in every country except Japan and hit number one in 83 countries including the United States, the streaming service said.

Since its premiere, the Bridgerton books have also been flying off of shelves. On online retail sites like Amazon and eBay, hardcover copies of individual books in the eight-part series are selling for as much as $768.57, while a collection of the complete paperback series is selling for $200.