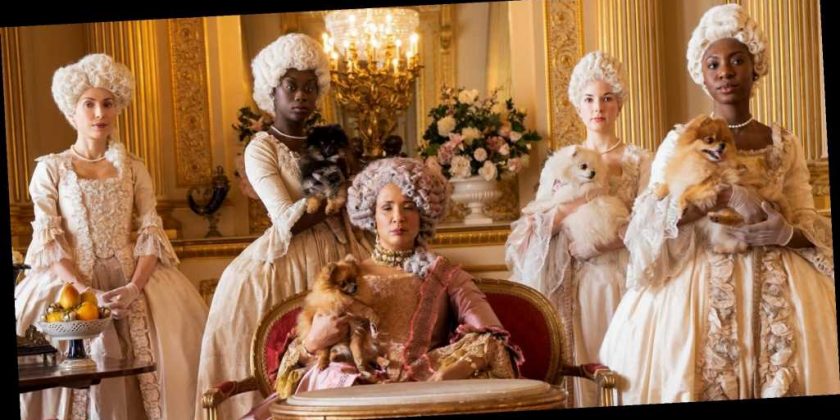 We never expected corsets to be selling out right now, but that's exactly what's happening. Seriously. Corsets are becoming increasingly harder to find online, and that's in large part due to Bridgerton.

Corsets have been around for centuries — they're shaping though constricting, but for thousands of years, women (and men) have been squeezing into the garment, no matter how uncomfortable it may be. Netflix's sexy new series, Bridgerton, takes viewers back to those times, and when people are not fawning over the Duke of Hastings (or his steamy relationship with London's most eligible, Daphne Bridgerton), they're busy googling corsets.

According to data aggregator Lyst, searches for anything "Regencycore" related are soaring, with the biggest increase coming in the corset category (inquiries into pearl headbands and long gloves are also spiking). Corsets saw a 123 percent spike in searches, with styles from Dion Lee and Rasario being the most coveted. Given the surge in interest in corsets, it should come as no surprise that they're selling out across the board. Last week, there were a handful of styles available on Nordstrom, but now, they've disappeared. Plenty of styles on Amazon are also showing they'll be back in stock in March (March!), which means it's seemingly getting harder by the day to get your hands on a corset.

We did some deep digging on Amazon, and as luck would have it, there are still some pretty amazing corsets available. There's this gorgeous mesh bustier that's going viral on TikTok — it's so sexy yet so pretty, and we can totally picture it paired with jeans and sneakers (a style move Bella Hadid would undoubtedly make). If you want a more toned-down corset, this sleek style from Le Mystere is a great option. It's super soft and practically invisible when worn under clothing, but gives you a nice shape all around. Whether you're looking for modern and of-the-moment or a bit more old-world and classic, Amazon's corset offering has it all. But our advice? Don't wait to buy the one (or two) you like, because they'll likely be sold out in a matter of days.