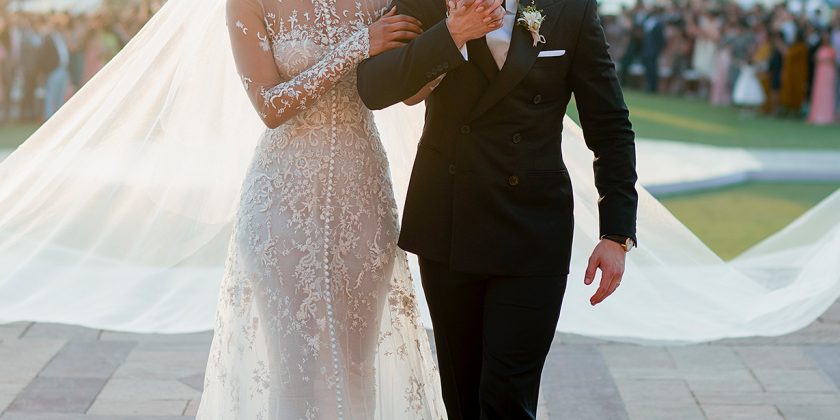 Priyanka Chopra is known for experimenting with her hair and makeup, but when she married Nick Jonas at the Umaid Bhawan Palace in Jodhpur, Rajasthan, she opted for a simple and elegant look that complemented her custom Ralph Lauren gown.

For her the Western ceremony held on Dec. 1, Chopra, 36, turned to makeup artist Yumi Mori, who has worked with the actress for years, to create her “soft and natural” look.

“We wanted to achieve a timeless and fresh look – nothing too overdone,” Mori tells PEOPLE exclusively. “We decided that something soft and natural would best complement the spirit of her Ralph Lauren wedding dress. We collaborated many times before, and often when we want to capture something simple, we do a coral eye. So, we did the same for the special day.”

Mori created the warm eye look using the Marc Jacobs Beauty Eye-Conic Multi-Finish Eyeshadow Palette, which she says helped “balance the softness of her fresh skin.” As for her lips, the makeup artist gave Chopra a subtle red stain, a color she typically wears on the red carpet. “We decided to go for red stained lips to balance the look. I used Marc Jacobs Beauty Le Marc Lip Crème Lipstick in the shade Oh Miley,” Mori says.

She completed the stunning look by wearing her hair in a updo with a few curled pieces hanging down to frame her face, which kept all the attention on her dramatic 75-foot train.

Chopra, and Nick, 26, then held a traditional Hindu ceremony on Dec. 2 where the actress wore a red lehenga, which is a long, embroidered skirt with a matching cropped top and veil and her groom dressed in a traditional outfit and turban.

Like her Western ceremony, Chopra wore her hair in an updo with a soft wash of eyeshadow and a red stained lipstick.

“Every girl dreams of being a princess on her wedding day,” Chopra tells PEOPLE exclusively in this week’s cover story. “But I never had a plan about what I wanted it to be.”

Chopra and Nick were joined by both sides of their family, including Jonas’ brothers Kevin, 31, Joe, 29, and Frankie, 18, along with Kevin’s wife Danielle Jonas, Joe’s finacé Sophie Turner and close friends Jack McBrayer, Elizabeth Chambers Hammer and more.

The couple was photographed arriving at the airport in Jodhpur, India, on Thursday ahead of their lavish dual wedding ceremonies. Nick first arrived in Delhi, India when he flew in from the U.S.on Nov. 22 to spend Thanksgiving with his bride-to-be. “Welcome home baby…,” the actress captioned an Instagram picture of the two cuddled up.

Chopra and Nick got engaged in July on her 36th birthday, after the singer closed down a Tiffany’s store to buy an engagement ring. An insider told PEOPLE, “They are so happy.”

After confirming their relationship status on Instagram a month after PEOPLE reported the news, the couple threw a lavish engagement party for their families and friends Mumbai, India.

Chopra shared a gallery of photos from the bash — which is known as a roka ceremony — including a group picture of the new couple with her mother Madhu, her brother Siddharth, and Jonas’ parents Denise and Kevin, Sr. all smiling together in front of a custom “NP” logo, which represents the couple’s first names.

Days before walking down the aisle, Chopra opened up to Vogue in the January 2019 cover story about the beginning of her relationship with Nick, including the first night they went out for drinks before attending the 2017 Met Gala together.

“We hung out for a couple of hours,” Chopra told the magazine. “He patted my back before he left.”

“There was a back pat,” she replied.

To which Jonas quipped, “She’s still upset about that. Your mom was in the house! I thought it was a respectful first night.”

Chopra answered, “It was too respectful if you ask me.”

The actress also has opened up to PEOPLE about what has made her relationship with Nick work, even despite their 10-year age gap.