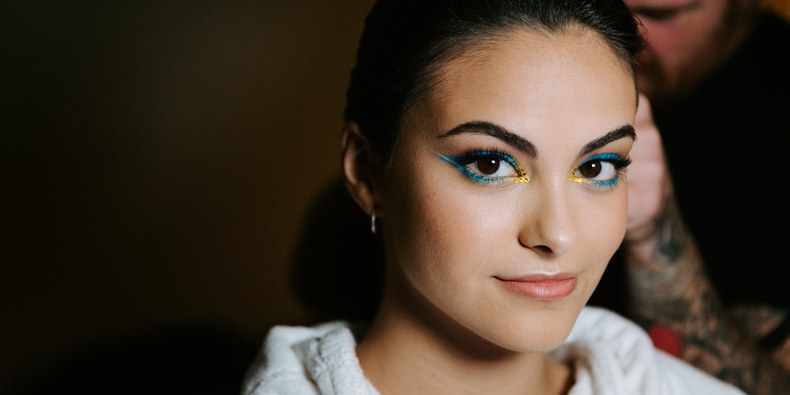 Attending the Met Gala for the first time would be an anxiety-inducing event for most, but not for Camila Mendes.

“I imagined this weekend would be a lot more stressful than it actually has been,” the Riverdale star admitted while perched in a director’s chair in her hotel room, as her hair and makeup team put the finishing touches on her first-ever Met Gala look. “Everything’s been running very smoothly. I tried the dress for the first time Saturday night and it was effortless. There’s a good amount of prep and open-mindedness to try new things,” she went on. The actress could not have been more calm before attending the annual fashion pageant, and emphasized the importance of “going into it with an open mind.”

Mendes will arrive to the 2019 Met Gala wearing Prabal Gurung, and with a few other members of the pop culture elite in tow, none of whom she has met. She’ll be seated with Nicki Minaj, Halsey, Candice Swanepoel, and Joan Smalls, and she joked that she expects to “feel like a nugget amongst chicken selects.” Still, she can recognize the solid merits of a staple like a good chicken nugget. “We need variety!” she laughed.

Even though she’ll be seated inside with a bunch of people she has never met before, the actress prides herself on being good at making friends, and she will have some familiar faces surrounding her at the event. Her Riverdale co-stars, Madeleine Paitsch, Lili Reinhart, Cole Sprouse, and her boyfriend Charles Melton will all be there, mingling before the seated dinner starts and accompanying her to at least one after party once the event ends.

“Last year, when I talked to Lili she was like, it’s so crazy, you feel like you’re the least important person there when you’re around all of these icons like Kate Moss and Lady Gaga and Rihanna. It’s easy to feel small in those situations, but I think I’m gonna go into it knowing that I deserve to be here, too,” Mendes declared with confidence. “I’m open to making friends and excited to possibly meet some of my idols.”

One of those aforementioned idols happens to be Lady Gaga, a camp enthusiast who was appropriately cast as a host of the evening, and a goal for Mendes and Reinhart. “Lili texted to me today and she was like, ‘I’m gonna meet Lady Gaga today and so are you.’ We’re gonna make it happen,” Mendes said, matter-of-fact. “We made a plan, I don’t know if we’re gonna follow through, but TBD.”

Texting a friend like Reinhart is something Mendes obviously does often, but when it came to the Met Gala, she specifically consulted her co-star about a few basic rules for the evening. “I asked her what’s normal and what to expect, and she was like, expect to be really hungry at the end of it,” a sentiment that was echoed by Mendes’s on-screen dad, Mark Consuelos and his real-life wife Kelly Ripa, via Facetime just before the gala. “They were like, ‘Eat before! I swear they served an almond.’ Definitely not the place to find a good meal,” she joked.

Another familiar face Mendes will look out for during the evening is singer-songwriter wunderkind Maggie Rogers. The two are old friends from their college days at NYU, and have been beacons of support for one another while gearing up for the big day. “We’ve been texting and calling each other all week. Bouncing back and forth, like, what should I do for hair, what do you think about makeup?” Mendes said.

“We’ve been involving ourselves in each other’s process because it’s just great that it’s both of our first years and we get to have a friend there,” she went on. “We consulted each other. My dress was way more festive. Hers was not simpler, but she balanced out the dress with something really campy in hair and makeup.”

The theme this year, “Camp: Notes on Fashion,” is one that many experts predicted most celebrity attendees might not totally nail the execution of or even understand how to define. But Mendes did her homework, and read the Susan Sontag essay, “Notes on Camp,” to prepare herself for the gala. The Prabal Gurung gown Mendes will wear, which consists of a yellow bodice adorned with yellow and white feathers, a robin’s egg blue sash tied at the waist into a large bow-train behind her, and a matching marbled hard-case clutch which reads “Classy” in cursive letters, is deliciously in line with the actress’s personal definition of camp. The actress would describe her look as a festive combination between “vaudevillian Old Hollywood” and “Brazilian Carnival samba.” Wearing something that could be described as “extra” is a pivot for Mendes, who admits she’s typically inclined to go for a more “natural” look, but as Mendes will tell you, “Camp is the opposite of natural.”

“Camp to me is theatrical, or performative,” the actress explained. “It’s being more extra than you need to be. Going that extra mile to enhance a look in all aspects. The dress doesn’t just speak for itself, but the makeup and the hair are doing their job and elevating the look somehow. As an actor, the thing that drew me most to camp is the performative nature of it.”

But just because this look is a little over-the-top doesn’t mean it’s totally out of her comfort zone. “It’s not necessarily out of my comfort zone because I do have fun doing it,” she said. “That’s why I feel extra excited about this year’s theme because I actually get to go for it, and not feel ashamed or like I’m trying to call too much attention to myself. That’s the big fear whenever you’re dressing campy or your feel that your look is a little bit excessive, you fear that people will think you are trying to draw attention to yourself. But this Met Gala theme embraces that concept of drawing attention to yourself intentionally and not being ashamed about it.”

Just before heading out the door, and remaining as chill as humanly possible, Mendes began effortlessly rapping along with precision to Craig Mack's "Flava in Ya Ear" once it started blaring from a nearby iPhone speaker. If that's the energy she brought to her first Met Gala, there's no doubting she'll end the night with a few new friends, just as she predicted.

Related: Riverdale's Camila Mendes On Navigating Fame, and Why She's Not Slowing Down Anytime Soon