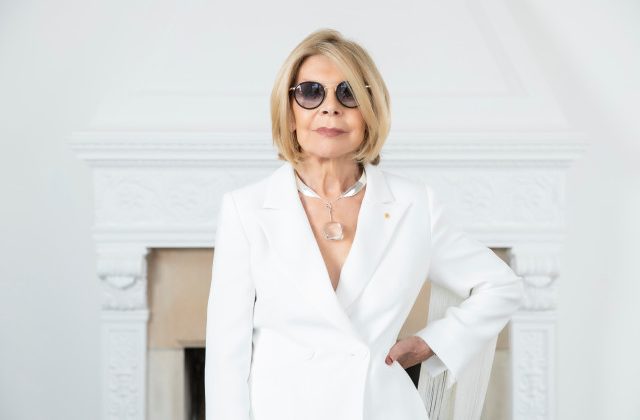 SYDNEY – Planning for a state funeral is underway for Australian fashion designer Carla Zampatti, who died Saturday morning at Sydney’s St. Vincents Hospital, a week after a fall at an outdoor Opera Australia production.

Zampatti, who was 78, fell on March 26 and hit her head on the steps of the company’s pop-up, waterfront amphitheater at Mrs. Macquarie’s Point, part of the Sydney Botanic Gardens which overlook Sydney Harbor, after the gala opening night of “La Traviata.” Family spokesperson Kellie Hush declined to comment on reports Zampatti never regained consciousness.

Opera Australia said it will be conducting a comprehensive safety review of the venue.

Noted for her minimalist tailoring, power suits and satin eveningwear, she was a go-to designer for generations of Australian women, from well-known international names such as Nicole Kidman, Cate Blanchett and Crown Princess Mary of Denmark to politicians and television news anchors, many of whom joined an outpouring of tributes on social media over the weekend.

Beyond her fashion career, Zampatti was also a respected business leader and philanthropist. The first female chair of the national multicultural broadcaster SBS, a position she held for 10 years and a former Ttustee of the Art Gallery of NSW, Zampatti’s board career embraced companies such as Westfield Holdings, the Sydney Theatre Company Foundation and McDonalds Australia. At the time of her death she was a board member of the Sydney Dance Company, the Australian Multicultural Foundation and the European Australian Business Council.

Tributes over the weekend were led by Australian Prime Minister Scott Morrison – whose wife Jenny Morrison often wore the designer’s clothes for official events, including those during the Morrisons’ 2019 trips to Washington and the G7 summit in France.

“We have lost a truly great and inspirational Australian,” said Scott Morrison in a Facebook post on Saturday. “Carla was an icon to the fashion industry, a pioneer as an entrepreneur and a champion of multicultural Australia. It was our great honour to have known her”.

In a statement Sunday, NSW Premier Gladys Berejiklian described Zampatti as “talented, generous and inspiring. A true trailblazer in every respect.”

Philip Corne, the former chief executive officer of Louis Vuitton Oceania and a member of Zampatti’s advisory board for the past five years, remembered her as “one of the great Australians.”

“She was so successful in her chosen craft, when it was so difficult for women to be successful – in the 1960s, to start your own business,” Corne told WWD.

Born on May 19, 1942 in Lovero, in northern Italy, Zampatti migrated to Australia with her family in 1950, settling in Fremantle, Western Australia. She left school at 14 to take various jobs, including a position at a clothing manufacturer.

She moved to Sydney in 1964, where she eventually found work at a now-closed blouse manufacturer called Nemco Fashion Products, where she was eventually promoted to product designer.

In 1965 Zampatti launched her own collection, accompanied by photographs taken in front of the Sydney Opera House, which was still under construction. Two years later she launched her collection nationally.

In 1970, after splitting with her first husband and business partner and armed with a small family loan, she struck out on her own, founding Carla Zampatti Pty Ltd.

Zampatti opened her first boutique in Sydney’s Surry Hills in 1972. She became one of the first Australian designers to expand into swimwear, launched a line of sunglasses with Polaroid and her own perfumes in the 1980s. In 1985, Ford Australia sought out Zampatti for a series of customized car interior collaborations, starting with the Ford Laser.

In the late 1980s, encouraged by support from American friends of her second husband John Spender, a former Australian politician, diplomat and barrister, Zampatti made a short-lived, lossmaking move into the U.S., opening two stores in Washington, D.C., and Manhattan, even buying a building on Lexington Avenue to use as a showroom.

Although she had some international wholesale accounts over the years, Zampatti primarily focused on her Australian retail business.

A semi-regular on the runway at Australian Fashion Week, Zampatti participated in the very first event in 1996, as part of a group show that paid tribute to some of the more established fashion industry figures of the time. Apart from Zampatti, none of the other names are still in business.

“The group show consisted of Carla, Trent Nathan, George and Harry Who and a number of her contemporaries at the time and I think what is a testament to her creativity and her strength as a businesswoman, she was the only one of her own generation who continued to show at Australian Fashion Week,” said Australian Fashion Week founder and Ordre.com co-founder and chief executive officer Simon Lock.

“She’s the only fashion icon we’ve ever had in Australia, I really believe that,” added Lock. “It’s a word that’s bandied around a lot and certainly we’ve had a whole Milky Way of stars. But just the longevity and the consistency of what she was able to do in the fashion industry is beyond the grasp of most people. Others just haven’t stayed that distance.”

Collette Dinnigan, whose first shows on schedule at Paris fashion week coincided with Zampatti’s four-year Paris chapter, recalled her as a great mentor and supporter of new talent. On multiple occasions Zampatti would throw open the doors of the Australian embassy in Paris, where her husband was Australia’s ambassador, to host cocktail parties for Australian and international media after Dinnigan’s shows.

“She would say, ‘You’re flying the flag for Australia and we’re so proud of you’,” Dinnigan told WWD.

“She would put the diplomat’s hat on rather than her fashion business hat, but she understood how hard and difficult it was,” added Dinnigan, who shuttered her fashion business in 2014. “Apart from that she was a very good businesswoman. She also understood her customer very well and she always changed and moved on with her customer; I think a lot of people didn’t understand that. That was something I learnt too, even with the [2008] crash, which changed my business forever. But it’s about moving with it and she certainly did that”.

Zampatti is survived by three children and nine grandchildren. Zampatti’s son Alex Schuman is the CEO of her company, daughter Allegra Spender is the company’s former managing director and Zampatti’s other daughter, Bianca Spender, launched her own successful fashion line, which won the 2015/2016 regional finals of the International Woolmark Prize.